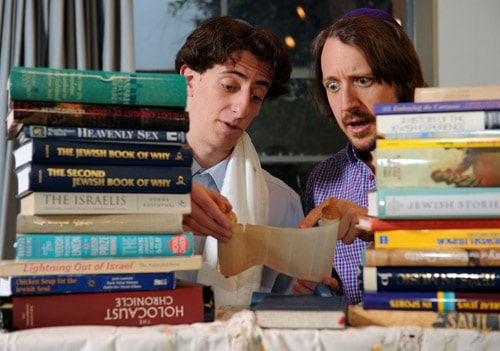 Plays that are in production for a mere four weeks usually have that “not soup yet” rawness about them that begs our charity. However, in the hands of a good director and strong cast, that rawness has a freshness and energy that carries the show. Such was the case with Jewtopia, which opened at last night at the Lucie Stern Center.

Director Jimmy Gunn told me that he envisioned this as having more of a comedy club feel. This observation may be true, particularly as the scriptwriters Bryan Fogel and Sam Wolfson originally met in an LA comedy club. However, although the action in Jewtopia was happening at the very edge of the apron of the stage, the comedy club similarity ended there. This lacked the in-your-face humor that is more off-putting and exhausting than funny. Instead, Jewtopia had the consistency and heart that comedy club humor so often lacks. The self-referential Jewish humor seemed to work in reverse and instead of isolating, opened doors for everyone. 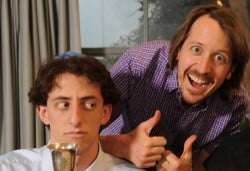 Actors Brandon Siberstein as Adam Lipschitz and Lance Fuller as Chris O’Connell played off each other impeccably. These guys were so good that the sum total was far greater than what either of them brought to the stage. This could have so easily not worked, but the rachmones* these characters brought to their own roles and to each other cut right through any possible criticism. I confess, I had a moment of apprehension when the play opened at the Jewish singles mixer as it reminded me of the old BBYO warm-up game “goy goy Jew” (like “duck duck goose” only the same), but in less than five minutes, it immediately warmed and the cast had the audience eating out of their hands as Lance Fuller pushed Brandon Silberstein into riffing off four types of Jewish males. While I imagine that some reviewers will no doubt expound (at length) on this being symptomatic of Jewish self-hatred, I’d like to think we’re so beyond that.

In addition to bilking every stereotype for what it was worth,the musical director nailed every musical reference as well from the old “Build a Succah” song to Ba’Shanah. Jewish summer camp should have been this good.

The only off notes to this production seemed to be largely a function of the script, not the performance. A ten minute interlude into Chris O’Connell’s circumcision seemed irrelevant and the humor flat. The faygela riffs toward the end seemed a little pointless, but once again, this was more due to the script than anything else. These small defects were not so significant that it detracted from the whole.

I’m tempted to say this would be perfect for BBYO alums, but then I’d be underselling the show. Jewtopia works for Jews and Gentiles alike. Let the orthodox hierarchy in Israel continue their dithering about who’s a Jew. Jimmy Gunn’s having fun – and this is worth sharing.