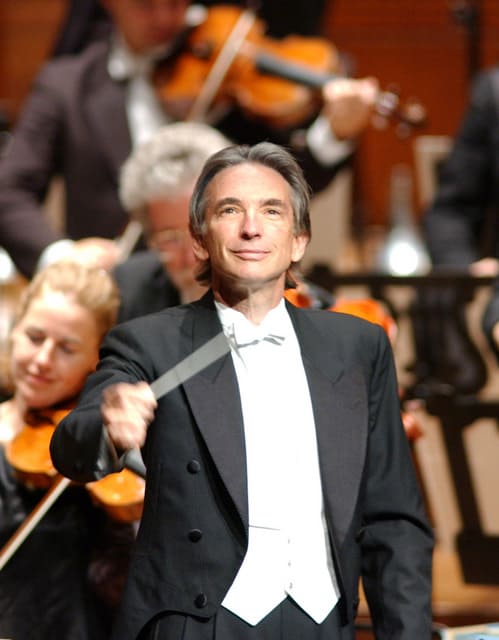 I had the good fortune to come of age at a time where getting schlepped into Manhattan for Leonard Bernstein’s Concerts for Young People was an unavoidable part of childhood. Later, Bernstein’s Norton lectures at Harvard kept me coming back to the piano. Like every kid exposed to the Bernstein magic, I knew how incredibly lucky we were. With the wonderful arrogance of youth, we knew that the New York Philharmonic belonged to us and we were richer because of it.

With this history in mind, I joined the hordes of little girls in dresses and boys in polo shirts and shorts for an afternoon at the Flint Center with Leonard Bernstein’s daughter, Jamie, Michael Tilson Thomas and the San Francisco Symphony. How could this possibly hold a candle to the real thing? Would this continue to work with kids? What about diminished attention spans? How could this possibly play in the Guitar Hero era? What would kids think of the musicians in their penguin-like formal wear?

I needn’t have worried. Nary a kid around me fidgeted or fretted as Jaime Bernstein and “Maestro Michael” took the stage. While Ms. Bernstein lacked her father’s omnipresent cigarette and lounging over the piano, she certainly had his physicality and commanding presence. More than a little of a showman herself, Bernstein used every muscle to bring the music home to her young audience. Maestro Michael seemed contained in comparison.

What impressed me most was how Jamie embraced her father’s pedagogical style. You weren’t here to learn about music, you were here to think differently. For me, the takeaway was in how she broke down complex rhythms for the kids. Opening with a particular complex nine-beats-to-the-measure time signature, she had the complex rhythm to hamburgers and hotdogs. If you have any doubt what I’m talking about, sing the rhythm to “I like to be in America” as “HAMburger, HAMburger, HOTdog, HOTdog, HOTdog.” I confess, I sang it in the car all the way home – and immediately tried it with the tricky five-beat-to the measure rhymn of Brubeck’s Take Five that continued to bedevil me at the keyboard. It’s been a long twenty years since Bernstein died, but it felt like he was reaching across the decades to remind me how easy it was.

The program selection smacked equally of her father – and not just because it was titled the “Bernstein Beat.” Opening with Times Square from On the Town, and continuing with selections from Mass, Jeremiah, Fancy Free and Candide before closing with four different bits from West Side Story, one could almost envision the senior Bernstein at work, intentionally selecting pieces whose high energy would appear to a young audience. Remembering the horrible reviews in the New York Times when Mass first debuted, it was heartening to hear this on stage.

When I got home, I realized that my son didn’t have the slightest idea who Leonard Bernstein was – and I struggled to explain this person who cast such a huge shadow. “You mean he’s like Stephen Sondheim”, interrupted by son, trying to understand. For all these reasons, it’s incredibly important that performances like this one continue to be a part of growing up – and I’m grateful that Jamie Bernstein continues share her father’s legacy. During the concert, the seat next to me was occupied by a young gentlemen who sat raptly perched on his mother’s lap. If there was any doubt what this was all about, the enthusiastic kisses he blew to all the musicians at the end of the show made the point more aptly than any review ever could.