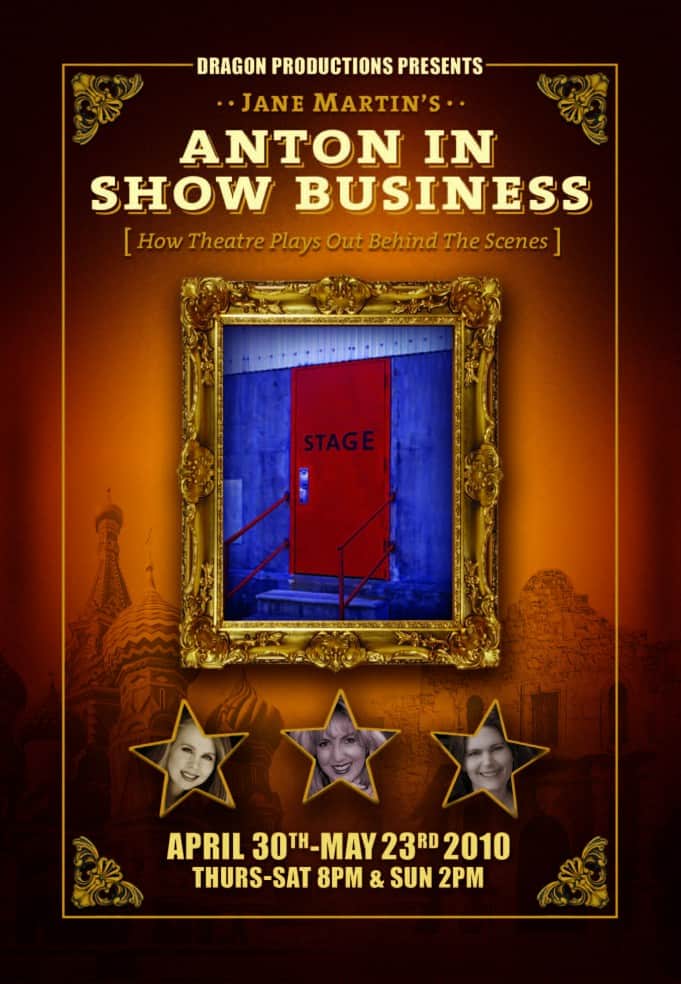 Even since Michael Litfin’s “PLACES” appeared at Palo Alto Children’s Theatre, theatre about theatre has been on my radar. Where else can we get away with being so bloody self-referential and over-the-top obsessed? Where else can navel-gazing be turned into art? Where else can we be skewered and redeemed at the same time?

The Dragon’s production of Anton in Show Business does all of this, and more.

Taking up the story of how a Hollywood ingénue, Texas babe, and failing middle-aged actress come together to put on Chekov’s Three Sisters, this Dragon production re-introduces us to characters we already know: the pretentious foreign director, the failing community theatre actress, the over-reaching critic.

While director Stephen Maddox doesn’t try to make any of these characters any more than two-dimensional cut-outs, they succeed because of that limitation, allowing the audience a knowing giggle while being drawn into the bigger drama.

The bigger drama is, of course, the relationships between the three main characters. If a show is only as strong as its weakest character, there was no weak link among any of the three sisters. Director Stephen Maddox’s kindness to his characters works a weird transference to the audience because at the end of the play, we care terribly about these people – even the manipulative Holly Seabé, played by Kristen Lo. Jennifer Jane Parsons (Casey) brought a depth to her character that was so touching I found myself worrying about her the next morning. Lastly, Meredith Hagedorn’s performance of the great-hearted Lisabette comes about as close as possible toward getting me to re-thinking my position on Texas.

While much could be done with the set design for this play (the Palo Alto Players’ 2007 production of Our Town springs to mind), the minimalist set worked well for this venue. Consisting of little more than a few mobile door frames, the almost non-existent set  focused attention entirely on the characters and reminded the audience just who made the magic here.

My measure of the merit of a show often lies in how successfully it diverts me from my cell phone. In this case, the cell phone won. During intermission, I just had to let friends know about Anton in Show Business.

Anton in Show Business will be at the Dragon in Palo Alto from April 30th through May 29th. Curtain is 8:00 PM Thursday 0 Saturday and 2:00 PM on Sunday.