Mongolia just marked its 800th Anniversary of the united Mongol State. This fact didn’t escape Tech Museum president Peter Friess, who managed to secure Genghis Khan: the Exhibition for its only west coast appearance this week at the Tech Museum. Organized by Don Lessem with curatorial consultation from scholars Dr. William Fitzhugh of the Smithsonian and Dr. Morris Rossabi of Columbia University, the exhibit is a little gem that will put Mongolia on the map for both kids and adults.

My interest in all things Mongolian was piqued twenty years ago by a show at the Smithsonian entitled Masters of the Eurasian Steppe. With its displays of rich clothing, Buddhist texts and 13th century pottery, this small show pushes many of the same buttons that made the D.C. show work so spectacularly. The visitor is treated to a rich display of artifacts from the National Museum of Mongolia and the Institute of Archeology from the Mongolian Academy of Science, many of which have never been seen before in this country. In addition to these treasures, exhibit goers will be treated to full panoply of stately Mongolian musicians, contortionists, a 13th century Mongolian princess. 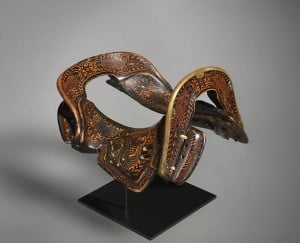 This show is important because Mongolia in general, and Genghis Khan in particular aren’t on our radar. Kids are lucky if Genghis ratess a paragraph in their 7th grade medieval history texts. Smithsonian Director of Arctic Studies, Bill Fitzhugh attributes part of this to the sixty year news blackout affecting Mongolia which extend from the 1930’s when Mongolia became a Soviet vassal state to the collapse of the same in the 1990’s. During this time, 20,000 – 25,000 monks and lamas were murdered, Buddhist monasteries were destroyed and much of the educated classes vanished – with nary a headline to mark their loss. Given this blackout, it’s little wonder that most kids associate empires with Microsoft and Apple, rather than the world’s largest contiguous imperial state that dwarfed even the Roman empire. 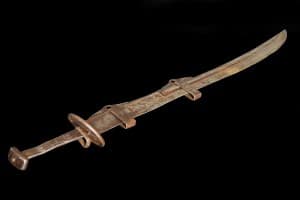 The show catalog Genghis Khan: the Exhibition by Don Lessem does justice to the collection and will hopefully keep this experience alive long after the show closes. Even better, though is the volume Genghis Khan and the Mongol Empire, edited by Fitzhugh, Rossabi and Honeychurch (University of Washington Press, 2010). Thoughtful enough to appeal to the serious student of Eurasian studies as well accessible enough for the layman, there has been nothing comparable to this work since Nomads of Eurasia was published by the Natural History Museum of LA County back in 1989.

This show is small enough to do comfortably in an hour, but be sure to leave time to linger over the rich costumes, magnificent weaponry and information panels. Genghis Khan is here for a limited engagement so you may want to check this out soon.