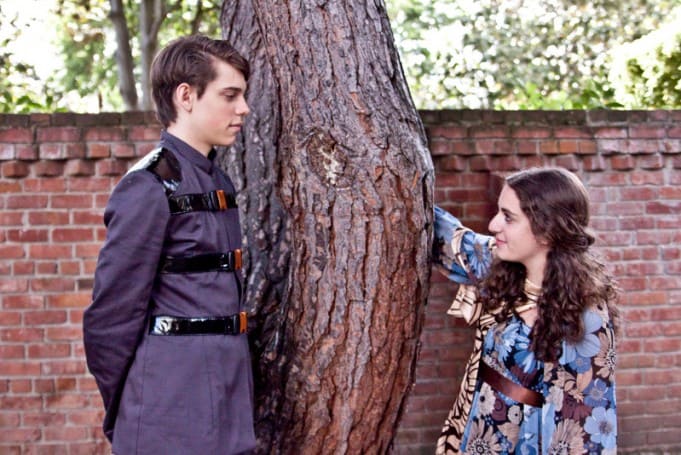 Some rules are made to be broken. Several months back, I decided never to review children’s theater. On one hand, I didn’t want to be hamstrung by an inability to be critical and on the other, it wouldn’t be fair holding kids to an adult standard. Fortunately, neither of these elements comes into play with respect to the production of Fahrenheit 451 that just previewed at Palo Alto Children’s Theatre.

This show is important for a number of reasons. First, it was part of a much larger community project called The Big Read involving Children’s Theatre and the Menlo Park Public Library that’s garnered considerable buzz. Thanks to the National Endowment of the Arts, a veritable fountain of events relating to The Big Read has flowed all winter including electronic music concerts, book discussions, bonfires, and a film showing at the Aquarius in Palo Alto. The grand finale of this cascade was the production of Fahrenheit 451 by the theatre’s brand new Teen Arts Council.

Literacy drives, however well-meaning, don’t get one out of their seats however, which leads to the second reason for this review: it was darn good theater. Directed by Michael Miranda, the cast sustained an edge of suspense and foreboding that would have been remarkable for seasoned adults, let alone younger actors.

Fahrenheit 451 holds up remarkable well over the years – which isn’t necessarily a good thing. Written in 1950 as a cautionary tale coming out of the totalitarian fears of the Second World War, Bradbury’s characters move to a soulless techno-beat of their own that has gained relevance over the decades. Bradbury’s futuristic world seems startling prescient, especially with regard to the inescapability of interactive large screen TVs. Perhaps that’s why it speaks volumes today, and why this production seemed so gripping.

Bradbury’s futuristic tale which matches the individual Montag against a book-burning league of firemen and state drones is well known. Ty Mayer brings a deft sensitivity to his performance of Montag that was matched by Lauren Garland’s portrayal of Montag’s wife, Mildred. Garland’s performance was just drop dead funny, if for no other reason than she can open her eyes wider than humanly possible. It would have been easy for a lesser actress to be overtaken by the two-dimensional nature of the character, but Garland takes it a step further as both she and Mayer provide perfect foils for the other. Standing in opposition to both, Jenny Dally embodies the romantic sappiness of Clarisse that Bradbury spoke of in his 2005 interview about the book.

The central drama was enhanced by a nonstop series of video protections over a series of disjointed scrims flanking the stage. Combining video with theatre often comes across as gimmicky, but Miranda’s background in technical theatre is evident because the video-over-video and use of randomly overlapping scrim screens worked well to create a sense of urgency and motion.

Chatting with theater-goer Mirium Rotman and her daughter Maya during intermission, both expressed relief from the unending tales of fairies and princesses that make up most children’s theatre. “This is really, really, good”, opined Maya Rotman, “but it’s also really creepy.”

As I left the theatre, I mused for the umpteenth time how incredibly fortunate we are to have Palo Alto Children’s Theatre, and marveled at what a screwy kind of miracle this place is both ourselves and our kids.

Take your teen to the theatre – or better yet, let you teen take you. The kids at Palo Alto Children’s Theatre do stunning things – and Fahrenheit 451 is worth putting on your weekend agenda.