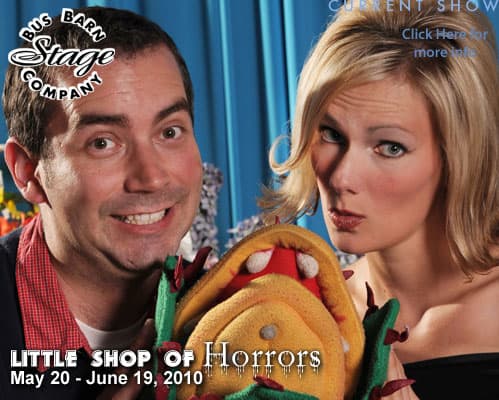 A good friend often asks why I subject myself to the same musical over and over again. That’s a fair question, especially when the show in question is as silly a bit of fluff as Little Shop of Horrors. Watching the same show done by different companies trains the eye. Not only does one begin to see the difference between good acting and acting that’s only mensa mensa, but one learns how differences in set design, blocking and costume bring different aspects of a show into focus. Moreover, every time an actor takes on a role, it allows one to see whoever came before. Just as our children will always be all of the people that they ever were in our eyes, a role becomes invested in everybody who has ever performed it. Specifically, for me, that means it’s impossible for me to watch whoever plays Seymour, and not see a little of Brian Franklin’s Seymour, and every other Seymour in the role.

All of this is a long wind-up for saying that no matter how many times you may have seen Little Shop of Horrors, the current production at Bus Barn in Los Altos shouldn’t be missed. Sometimes you know in the first ten minutes that you’ve walked into something that’s going to be a fun ride, and this production of Little Shop is one of them.

One big difference with this production was that the three urchins hanging on Skid Row that function as some kind of demented Greek chorus come into high focus, which I don’t remember happening in earlier productions. Heidi Kobara, Ernestine Balisi and Hayley Lovgren carried the water because just when you can’t wrap your mind around old Jewish guys getting eaten by talking plants any longer, the action moved to these three and they took it some place different. Kobara’s moves so perfectly defined that if she took it even a smidgen further, she would have been positively certifiable – but instead she was absolutely fascinating to watch.

Jason Arias and Dani Collins also had nary a false move as Seymour and Audrey. Collins’ throaty vocals brought a funny depth to the character that you just don’t associate with a Bronx accent. These are interesting roles because they’re utterly two-dimensional by design – but if they were just that, songs like “Suddenly Seymour” would fail miserably.

The Bus Barn was also the perfect venue for this play in particular because the house seems so much a continuation of the skid row set that the edges of where the stage ended and the house began seemed to smudge a bit. I’ve been real conscious lately of what works well for community theatre. Little Shop of Horrors is perfect, for so many reasons, not the least of which is it’s hard to justify shelling out a seventy bucks to watch a play about man-eating plants. However, with local theater of this caliber, we’re darn lucky. Seeing Little Shop here was a far richer experience than seeing it in other more upscale venues. Community theater doesn’t get better than this.

I left the Bus Barn completely content. This was a great show for them to end their season on – and I look forward to their upcoming 15th anniversary season opening in September.