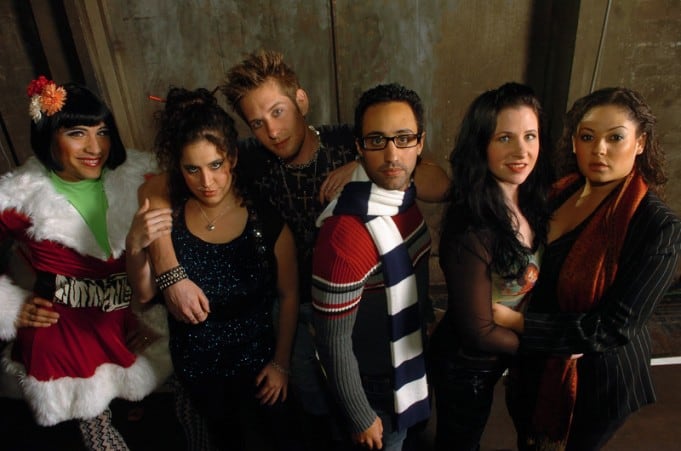 Directed by Joe Duffy, the Palo Alto Players’ RENT opened to a standing ovation.  With its high energy, strong vocals, it’s sure to be on theater-goers’ short list of what to see on the Peninsula until it closes on May 9.

Staging such a well-known show is particularly challenging for small community theatres as it immediately invites comparisons to the recent touring production at the Curran Theatre in which Adam Pascal and Anthony Rapp reprised their original Broadway roles. Moreover, just as it can be incredibly expensive for a woman to artfully achieve a natural look, effectively recreating chain link fences and randomly draped strings of Christmas lights that make up the gritty loft at 11th and Avenue B in Manhattan’s East Village doesn’t come cheaply and is often beyond the means of a small company.  The Palo Alto Players didn’t disappoint, and brought this 1996 Tony and Pulitzer prize-winning show to life in ways that exceeded expectations.Paralleling Puccini’s La Vie Boheme, the play tracks a year in the lives of a group of young artists struggling to survive in the mid-1990’s in a world rent apart by AIDS and heroin.  Originally staged at a time when AIDS was a death sentence, the play’s high energy casts a heroic glow on an otherwise gritty world.  The vitality and life-enhancing energy of this play have caused many to suggest that it will become a classic. 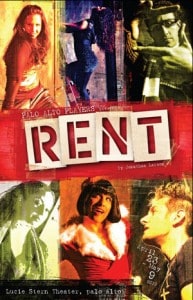 Act One opened as narrator Mark Cohen (played by Scott Fish) brings us into the loft where ex-junky, newly diagnosed roommate Roger Davis (played by David Saber) avoids the world while struggling with his song writing.  Any lingering diehards in the audience who didn’t immediately succumb to the vitality of the openings songs were brought to their knees by Danelle Medeiros, as Mimi, singing “Light My Candle”.  While the first act was not without a scattering of insignificant sound and lighting gaffes, I was immediately captured by the high energy, killer vocals, and physicality of the performers, which were unbelievably sustained through the  first act.  In his various ensemble roles of waiter and windshield washer, Ben Lauing provided small moments of much-needed relief from the unrelenting high energy. 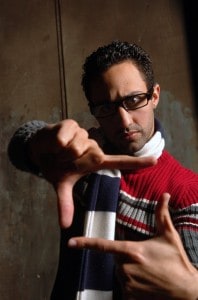 As the second act opens, the unity of the group is threatened, first by the death of drag queen Angel (commandingly played by Brian Conway) and then by the breakup of Mimi and Roger.  In many ways, the second act was far better than the first;  the energy of the performers was better modulated and the technical issues were fewer.   Providing the depth and meaning that were missing from the first act,  the play goes to the heart of “the vie boheme.”

The non-traditional lighting, relying on source four high sides and shin busters, silhouetted the actors in center stage.  Other more subtle lighting effects caused one to focus as much on the shadows of the characters, as the characters themselves.   New elements of a deceptively complicated set were revealed throughout the first act.

Writing fourteen years after RENT opened on Broadway, one wonders whether the very topicality of this rock opera will cause it to become a period piece, in much the same way as HAIR.  This is a fair question.  The depth of the second act saves RENT from the fate of HAIR because it balances our existential dilemmas against the redemption found in love and art.  As long as RENT speaks of the cradle that we all rocked out of and points to the  vulnerable underbelly in all our contemporary craziness, this show will remain as vital and life enhancing as the performance itself.  The Palo Alto Players did a splendid job in keeping this vitality on the stage.