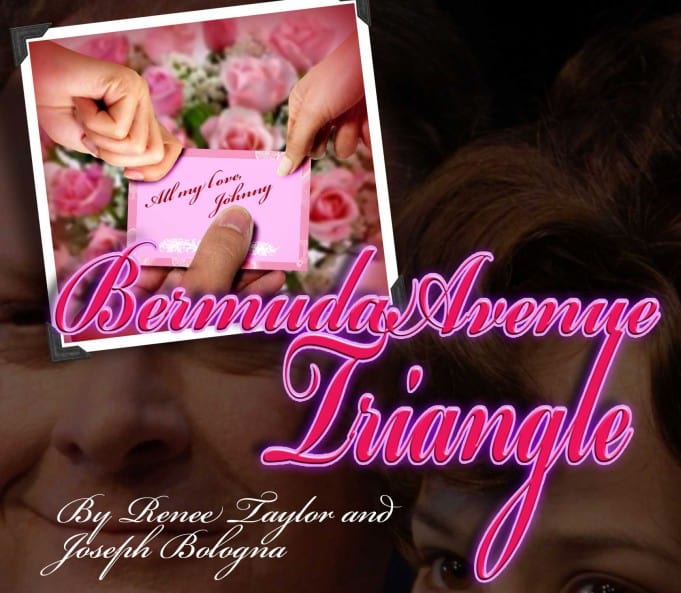 Lucile Ball, your new play has arrived. It’s called Bermuda Avenue Triangle, and just opened at the Hillbarn Theatre in Foster City. Oh, I must warn you. Times have changed. A lot. I hope you don’t mind a bit of choice language. This is Las Vegas after all. And, oh yes, how about a ménage à trois with a drunk stranger to spice things up? Don’t worry though, there’s still plenty of heart, and a charming dance number here and there. Let the laughs roll.

And roll the laughs do. Indeed, this is “an orthopedic romp.”

Did you hear the one about the Jewish widow, the Irish widow, and the charming gambler in Vegas? Then, along comes a Rabbi…

I’m pleased to see this edgy and entertaining script (Renee Taylor and Joseph Bologna) come to life at Hillbarn. Based on the standing ovation last night, it will greatly please their core fan base without the need to instead reach for a tired classic.

Two daughters, Angela (Kathleen Gabriel) and Rita (Heather Galli), move (or, “dump” according to the brochure) their mothers into a Las Vegas retirement condo, replete with Pepto Bismol pink walls, and assorted Vegas nick-nacks; not to mention a bonus, simulated rain forest. The two are a sorry and cantankerous lot. They’re friends because they get better deals by shopping together and buying in bulk.

Tess (Monica Cappuccini), an Irish widow, can’t have sex, since marriage, thanks to a curse. Fannie (Melody Cole), the jewish widow, cries a lot.

Things take a turn for the crazy, when a mysterious, but charming drunk (Tom Baxley) rescues them from a mugger on a hiking trail. Soon, he woos them, sweet talks them. But who is this man, and what was he doing wandering drunk as a skunk in Red Rock Canyon with no identification? And why does he shout out “Ruby, Ruby!” in his sleep?

A Rabbi (Anthony Silk) unwittingly finds himself more involved in the apparently sordid not-so-private affairs. “I think I’m in the Twilight Zone,” he gasps when he witnesses the sexual re-awakening. The sleepy community of Bermuda Avenue Triangle is soon abuzz with stories and sightings of illicit desire and passion. Unfortunately this behavior violates the HOA code of conduct. Reminder: don’t buy a condo with a morals clause.

The performances are, for the most part, wildly entertaining, and well suited for slapstick comedy. In particular, Melody Cole is outrageous. At times she reminds of Lucille Ball. The next channeling Betty Davis. I thought: this is The Lucy Show + Golden Girls + Whatever Happened to Baby Jane. Squint your eyes and I swear you can see Joan Crawford and Betty Davis in Cappuccini and Cole.

There are a few hiccups. The opening is a tad rough. The lines and chemistry don’t feel right. Perhaps the leads use the word “stupid” too often in an attempt to set them up early as partially unlikable. Things really begin to cook though when Tom Baxley shows up and begins his crafty con game.

Also, the length is slightly long. Towards the end, I felt they were trying to juggle too many messages; neatly wrap everything. For example, the reinvention scene where the mothers reaffirm their love for their daughters doesn’t quite work as well as it could, since we have little vested interest in these largely off-stage characters. Still, these are minor things.

Yes, that would be me last night walking out of Hillbarn with a silly grin on my face.