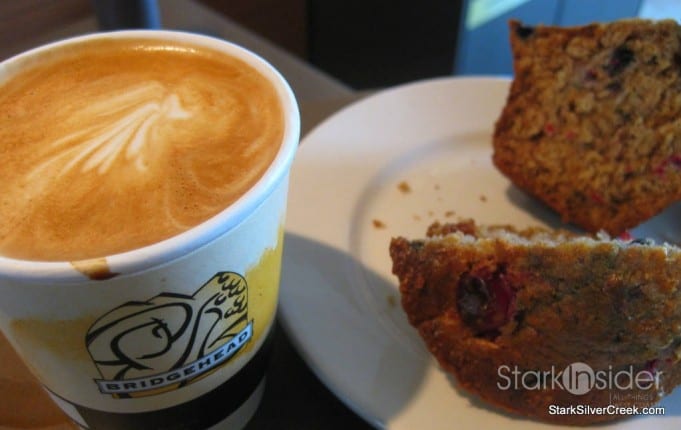 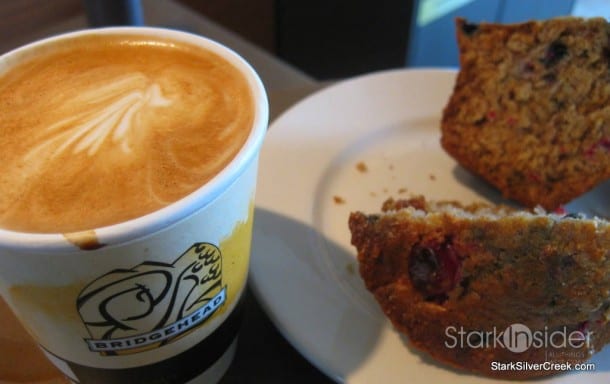 While in Ottawa last week, we dropped by a Bridgehead coffeehouse in Westboro for some hot lattes after our workout at GoodLife Fitness. Bridgehead Coffee is exclusive to the Ottawa area and specializes in 100% fairly traded and organic coffees and teas.

It was originally founded by two United Church ministers and two social activists in Toronto who were concerned about the fate of small-scale coffee farmers in Nicaragua facing challenges of unfair terms of intermediaries and a U.S. trade embargo. In its 30 year history it has expanded to different product lines and then finally returned to its coffee roots in Ottawa.

I do love the concept of supporting fairly traded and organic coffee, however, one sip of their lattes and, frankly, all I could think about was how good it was.

The latte was hot, rich and full-bodied…surprising since I had ordered it with skim/non-fat milk. The espresso notes in the latte were earthy and had a sweetness of dark chocolate. Paired with the triple berry muffin ($1.50) and it was like a wonderful warm hug on a cold winter’s day. The muffin, unlike some other coffee houses, was moist and really let the natural sweetness of the berries shine. No sickly, sweet lump of dough here!

I also tried the Moroccan Chicken Sandwich with Red Pepper Jelly ($5.25) which was a very creative combination and savory. It reminded me of some of the sandwiches I had at Pret a Manger in London.

The atmosphere was also relaxed and made you feel welcomed. It did help that they had free wifi which we could jump on with my iPhone and Clint’s Droid.

A short visit to Bridgehead it was, however, the memory of that latte still lingers. It was superb. According to their website, the coffee does get shipped from Nicaragua to California and then transported via train to Ottawa.

Perhaps one day, they would decide to toss a couple bags of it off the ship into a Bridgehead location in California?