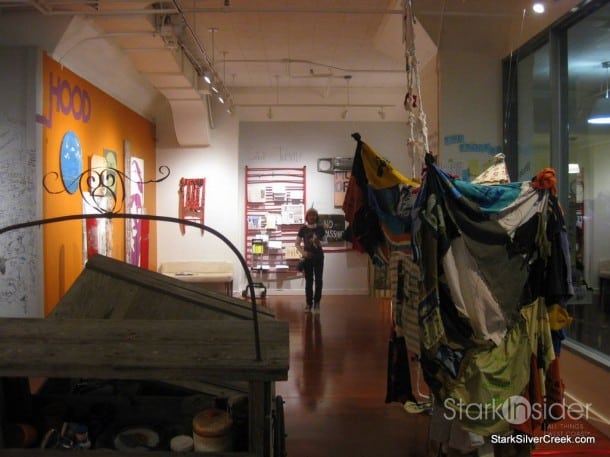 Just before I attended the African-American Shakespeare Theatre Company’s production of ‘Cinderella’ this past week, I couldn’t help but pop into the Sargent Johnson Gallery at the front of the African American Art & Culture Complex. On exhibit is ‘The Welcome to the NeighborHOOD Project’ which features sculptures and other mixed-media works by five local artists with help from 16 youth interns from the non-profit Literacy for Environmental Justice (LEJ).

The themes of gentrification and displacement, the opposing forces of man vs. nature, art as activism, and the impact that people can make on their communities were explored and formed the inspiration behind the videos, sculpture, photography, painting, graphic arts, screen-printing & assemblage displayed.

The works are colorful and bold and it was apparent that the discussions and activities that led t the creation of these pieces were just as important as the final result of it.

The exhibit runs from October 21, 2009 to January 10, 2010 at the African American Art & Culture Complex. For more information, you can visit: www.welcometotheneighborhood.us.

After a tour of the exhibit, I entered the theater for some fairy godmother magic with the production of ‘Cinderella’. The foyer, which had already been swarming with activity about 45 minutes before the start of ‘Cinderella’ was now completely packed with people. A few little princesses were spotted as well.

A review of the play can be found here, “Theater review: ‘Cinderella’ enchants, casts magical spell of non-stop laugher for entire family“. The ugly stepsisters were a hoot.