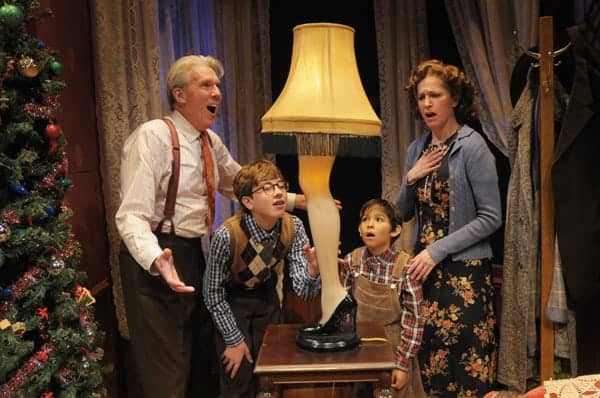 Oh, what would Bing Crosby think—or sing? Yes it’s a white Christmas in 1940’s Indiana, but they’re no chestnuts roasting by the fire. Instead we enter the wacky, even sometimes gloriously campy, world of the Parkers: leg lamps, hound-stealing turkeys, rubber snakes falling from the skies, and grumpy mall Santas.

A Christmas Story is so good you too will want to stick your tongue on a lamp post in the dead of winter.

In the kitchen The Old Man (Howard Swain) discovers with dismay that dinner is once again meat loaf and red cabbage. But, no matter. He dreams of finding the perfect turkey this Christmas, if only the furnace and Olds would stop breaking down long enough for him to get sniffing the birds at the local A&P.

Adult Ralph Parker (Dan Hiatt) narrates, jumping in and out of scenes, and reminisces about the days of the Little Orphan Annie Radio Show, Black Bart, and Red Ryder.

“You’ll shoot your eye out!”

Thankfully, A Christmas Story dials back the sentimentality and pours on glossy, Simoniz-coated comedy.

And it works, much to my surprise.

In the end when the family does, somehow, manage to celebrate Christmas morning opening gifts in their pajamas, you feel genuine affection. The undercurrent of anti-consumerism and overt holiday commercialism is as relevant today as it was when the movie the play is based on hit theaters 26 years ago.

The cast is spot on. Timing, delivery, energy are all there. Another pleasant surprise is the strength of the child actors who don’t rely purely on the cute card.

Howard Swain, though, as the slightly less than brilliant father towers in a comedic performance of epic stooginess.

The leg lamp storyline (a major award!) is priceless and results in some of the zaniest scenes. It’s precisely why this material is so good. We’re not doused in sugar-coated, diamond sweater sentimentality. Rather we are treated to a special night of satire, nostalgia, and a generous serving of inspired camp.

Not everything is perfect, though. Some punch lines and zingers are over-worked; used perhaps just one or two times too many. And the overall length is about 10 minutes longer than it needs to be. Minor stuff to be sure.

This holiday classic should be at the top of your Christmas list. You’ll walk out with a giant ear-to-ear grin. Just make sure you wee-wee before you go-go.