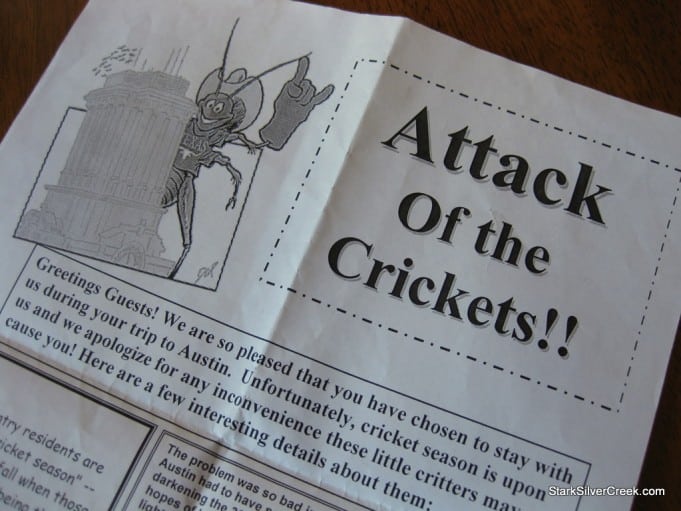 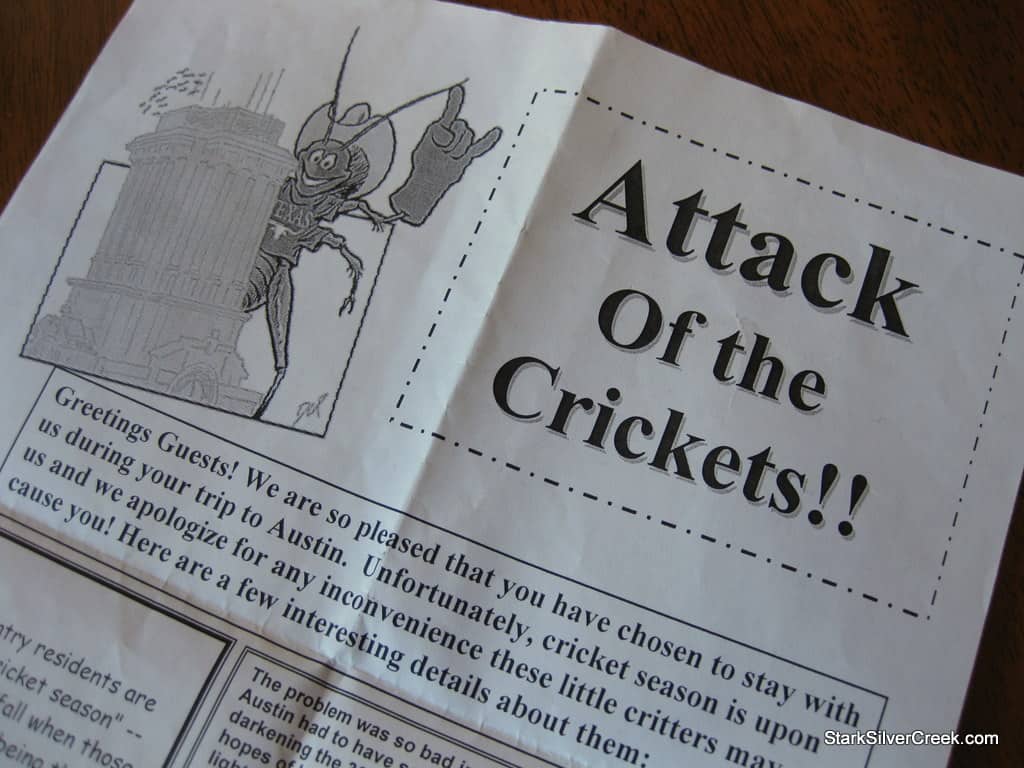 For someone who travels quite a bit, I have developed a curiosity for the items that greet you at the reception area of hotels. It ranges from signage proclaiming the benefits and conveniences of the particular hotel or hotel chain, to the daily national and local newspapers, to my favorites which are salt water taffies and warm chocolate chip cookies.

I thought I had seen it all until I was checking into an Austin hotel this past week. On the reception console was a stack of paper which caught my eye. On the top left, a black and white Xerox copy of a cartoon cricket with a cowboy hat and a t-shirt that said “Texas”. On the right were the words, “Attack Of the Crickets!”

For a second, I had to make sure I was not dreaming and I did just land from my flight and caught a taxi to this hotel. Peppered on the rest of the page were some interesting facts about crickets so that hotel guests may not be alarmed should they see crickets in their rooms. According to the desk clerk, this was cricket season in Austin and these critters have been seen in hotel rooms. This was a warning not to get alarmed.

In case you were interested, here are some factoids from the page:

The problem was so bad in 2007; the University of Texas at Austin had to have school officials take the unusual step of darkening the 307-foot-tall-bell for three nights a week in hopes of keeping the insects away. The bugs are attracted to lights, so therefore downtown is a haven for the pesky insects. —USA Today

Most Hill Country residents are familiar with “cricket season” — that time in early fall when those pesky bugs end up being those crunch critters underfoot. When the UT Tower is lit, the insects actually pile up so the are 6 to 8 inches deep on the sills and grates of the tower. (We assume the insects are drawn to light and not UT football victories.) — Austin Chronicle

I didn’t see any of these crickets in my room that evening but it did remind me of my 10 weeks in Beijing where I had insisted on staying in university accommodations that the normal student stayed in. The cost of the dorm rooms were $8/night and when I first arrived at my room and opened up the wardrobe cabinet, a dozen or more cockroaches scurried into the dark shadows of the cabinet. It was a gleeful moment which I thought I was really “roughing it”. It probably helped that I knew at the time the story would cause my dad much angst as he had insisted over and over again I stay in the nicer units set aside for foreign students.

I wish I had StarkSilverCreek back then, oh the stories and adventures I had while in Beijing…the morning breakfast delicacies, traveling to a night club in the back of a van sitting on old tires and the hikes out to the Summer Palace.

I digress, Austin was nice and I got a chance to go back to Tomo Sushi and verify once again that the “Ex-Girlfriend” roll is superb.