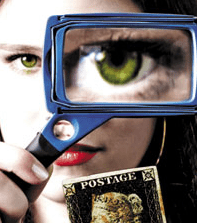 4.5 out of 5 stars - 'Right on the Money'
Magic Theatre, San Francisco
Directed by Loretta Greco
Play by Theresa Rebeck
Review by Clinton Stark

People, like stamps, have characteristics that are both flawed and perfect. How you view them is a matter of perspective.

In Mauritius, this is the philatelist-sized challenge we face when measuring the actions of the five characters. Is the glass half full, or half empty?

This is the first (and possibly only) time I’ve ever seen a stamp collecting based comedy caper. Or a stamp collecting based performance of any kind for that matter. Regardless, Mauritius delivers the goods. No doubt it’s unique. But also I appreciated the grey area of human nature that is so well captured in the ebbs and flows of one’s desire to do what is right, guided by an internal compass that is not always predictable.

The story (by Playwright Theresa Rebeck) finds Jackie (Zoë Winters) discovering an allegedly rare and valuable stamp (or two) from her mother’s inheritance. When the local stamp shop owner Philip (Warren David Keith) dismisses her, an eager amateur, Dennis (James Wagner), jumps in to help. Meantime, Jackie’s sister Mary (Jessica Kitchens, for the extended run June 17-28) claims the stamps as her own, professing her love of the history and the sentimentality of the collection.

Sterling (Rod Gnapp), a mysterious high worth collector, is all about the money, the deal, and the desire to own the unattainable. Where others see flaws in stamps, he sees perfection.

Emotions run high as the authenticity of the stamps are questioned. Family relations are strained. Selling the collection can help pay down the bills, but is that a worthy destiny?

The second act is mostly about a deal. A big time deal. A cat and mouse game ensues. How much do you want for the collection? Why don’t you tell me how much you’re willing to offer first?

Loretta Greco, Artistic Director a the Magic Theater, writes that the play has “a wonderfully scrappy soul.” And scenes such as the negotiating where all sides are possibly right, possibly wrong, or just possibly confused, showcase expert dialog — rough, human, and eloquent at the same time.

In one scene, Zoë Winters demonstrates a world-class breakdown, complete with flying boxes, drawers and other audience-threatening objects.

The casting is ideal, with strong performance across the board. The timing and chemistry are also top notch. The play takes place primarily in the stamp shop with bookshelves in the background. Thanks to the intimate design of the Magic Theatre, the audience is right there, almost a participant.

Mauritius is showcase of talent, story and first-class entertainment.

See it if you can soon, as the extended run ends June 28. Then enjoy a post-show stroll through the stunning Marina district neighborhood in San Francisco.

Interestingly, at the end of play, I told my friend that none of the characters were likable in a traditional protagonist sense. And then I realized that was exactly the point. It’s not that I didn’t like them. There motivations were true, but imperfect, often knowingly.

But as Dennis says about stamps and people, “it’s the errors that make them valuable.”