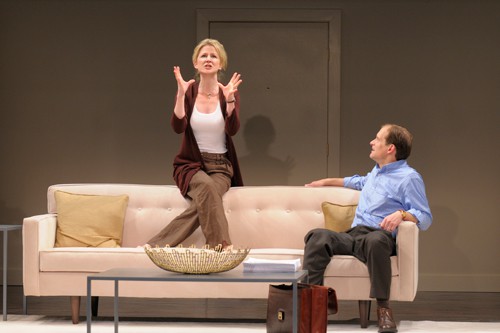 At Home At The Zoo

A puzzle, I thought, as I peered from my seat at a rectangular white canvas spanning the width of the stage.

I waited in anticipation and was soon relieved when the canvas swooshed up revealing a stark white, modern living room. The outlines of various pieces of furniture could only be visually detected by the change in shades of white. So stylistically correct — like the front of a home and garden magazine — yet so lacking life like the vibrant colors on the set of ‘Boleros for the Disenchanted‘.

Sitting on a sofa in the middle of the small, rectangular room, Peter (Anthony Fusco) edits a 700-page textbook which he proclaims to be “the most boring textbook ever.”

“Wouldn’t that be eternal hell!” I thought as I recollected the textbooks I had read in a cramped dorm room in a past life. At least that had an end.

But here in Peter’s life we realize he will read textbooks day-in and day-out unless he actively pulls the plug. But does he want to or have the will to?

It is even difficult for his wife, Ann (René Augesen) to shake him out of these doldrums.

A conversation starts with Ann, dish towel in hand, sauntering into the living room, declaring, “We need to talk.” Like many married couples, the conversation is safe, doesn’t engage, but also doesn’t hurt.

Anthony and René successfully convey the complex layers of words, thoughts, desires and confusion. The play starts off like Peter’s description of what he thought the agreement with Ann was when they married: “a pleasant voyage on a calm sea”.

‘At Home at the Zoo’ challenges the audience to ponder how civilization has tamed us to the point where we are pacified into steady-state contentment by having two of everything in the kitchen, a nicely appointed apartment, two children, two cats and two parakeets. What happens when we break free from it, when we venture to the opposite extreme?

Conversation soon spirals into “bad” topics that are usually avoided like icebergs. Ann starts to pour out her discontent: that nothing is sufficient and how Peter is a good lover but a terrible fucker. The contrast between the subdued, neutral stage set and the graphic and savage language is startling. The climax is unexpected; strangely shocking as Peter reveals a sexual encounter he had during his first year at his fraternity.

This home life in the first act is contrasted with the second act which was originally entitled, “The Zoo Story”, written by Edward Albee in 1958, almost 50 years prior to the writing of Act 1. Having left his apartment to read in the park, Peter is confronted by Jerry (Manoel Felciano) who is the polar opposite of Peter.

If Peter is the civilized animal secure within the parameters of his park bench, then Jerry is a wild animal taunting Peter to react to his life and his stories. Manoel has his moments with sharp dialog and acting out animated stories about his colorful neighbors. However, he lacks a certain believability that permeates René and Anthony’s characters.

This play is as much about the dialog that takes place on stage as it is about the way it grabs holds of the audience. It forces you to reflect on the course of your own life as you sit, prim and proper in a theater seat.

What if, instead, we all jumped out of our seats, ran around and pushed the person in front of us?

Instead, we are separated from others by invisible walls that makes it challenging to connect and, as Jerry proclaims, sometimes the hardest person to connect with is the one looking right at you in the mirror.

‘At Home at the Zoo’ is cleverly crafted to shake off civilization and reveal what happens emotionally when we dare to reach through cage bars.

There’s a moment in the first Act of At Home At the Zoo which tells the whole story. It’s an agonizing 30 second moment of silence. The Office take note. This play is all about revelling in dark places. Exposing them for all to see. The human condition is awkward, indeed, juxtaposed against internal angst and confusion.

No doubt this is a thinking person’s play.

Through and through, it’s cutting… as in devil dog, 6-hamburger, vicious, sexy cutting. The kind with snarl, despair, revelation and a climax that leaves the viewer confounded.

It might be pleasure. It might be work. But it’s definitely worth the effort to discover that a 50-year hiatus since Edward Albee’s original ‘The Zoo Story’ has done nothing but amplify the relevance of its characters and meaning.

Amusingly, I kept hearing echoes of “Troy!” in my mind before I realized that this was not ‘War Music’, and that Anthony Fuesco as Peter had found himself a meaty role befitting his acting chops and distinctive voice.

ACT has delivered another fine production worthy of every accolade it receives.