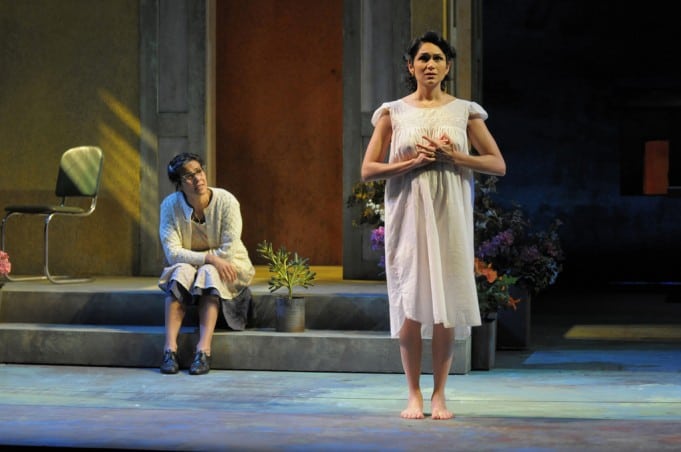 Boleros for the Disenchanted

‘Boleros for the Disenchanted’ starts off set in Miraflores, Puerto Rico in 1953. Flora, a girl in love yet awakening to the first glimpses of its pains, finds out her fiance Manuelo has been rumored to have slept with another girl in the village on multiple occasions.

A strong-willed Flora, who has been brought up to believe in God and the sanctity of marriage, refuses to accept Manuelo’s laments that he is just a Man and it is in Man’s nature to be a man. Dion Mucciacito oozes with charm as Manuelo, and makes the character very likable whilst expounding on the necessities for a man to cheat on his wife. There is no questioning why Flora has fallen so head over heals for Manuelo.

Listen to Clint and Loni discuss the play:

The squabble of young lovers is contrasted with the realities of life in Puerto Rico poignantly by Flora’s parents, Doña Milla (played by Rachel Ticotin) and Don Fermin (played by Robert Beltran). Although the story takes place in Puerto Rico, the situation and human elements of this dialogue struck a deep cord with me and through this fantasy of stage, made me reflect on the actions and perspectives that my own parents experienced. Don Fermin, is far more eloquent, insightful and raw than most grown men. What I loved about this scene are the various shades of gray. Nothing is black and white as Flora would love to cast people and situations in during her youth.

All this banter is set against a colorful and warm palette. The set gives the audience room to imagine the vibrant life in Miraflores, the lit up boxes that represent the other homes in the village: never too literal, never restricting the imagination.

A heart-broken Flora decides to leave Miraflores where she has spent all her life and venture to Santurce, Puerto Rico to heal her broken heart and while there, meets Eusebio who she would eventually marry and move to Alabama. One of the strongest performances was given by Drew Cortese as Eusebio. His dialog with Flora at a bus stop about the nature of longing and love is engaging and revealing.

Eusebio asks the question of whether any of us are smart about our feelings. To which Flora responds she thinks God gave people feelings just to keep us below angels, but above beasts.

Although the longing to be loved and the fear of getting hurt is a universal theme woven often into many stories, it is with the exceptional script written by José Rivera that makes the treatment of this theme in ‘Boleros for the Disenchanted’ haunting and heart-wrenching.

The second part of the play is set in Daleville, Alabama in 1992 and shows Flora and Eusebio, now older and not as vibrant. Eusebio is bedridden as diabetes has slowly taken a grip of his legs and Flora now is a splitting image of her mother seen earlier in the play talking to plants. The set design that was full of color in the first part of the play is now bleak and grey, showing a world that is vulnerable. (Later in the cast discussions post play, Carey Perloff, Artistic Director of A.C.T. did note she was faced with a budget for set design half of what she originally thought and the limited budget required some creative thinking. I thought the resulting set design demonstrated that creativity is a fabulous substitute for tight budgets.)

Flora has decided to volunteer in her church to counsel young engaged couples about the realities of marriage so they may consider the weight of the commitment before tying the knot. The first couple to be counselled is Monica (played by Michele Vazquez) and Oskar (played by Dion Mucciacito) who have only been dating for 2 months.

Through the dialogue, we learn of the hardships of marriage and the nature of love stripped of all the superficial flowery words and the vibrancy of youth. The second part was heart-wrenching, sad and yet so beautiful in its truth. I thought this part of the play was one of the best explanations of unconditional love. The second part sadden me personally because the scenes and dialogue between Flora and Eusebio hit home for me in what I have experienced with my parents and the projection of the journey still ahead for them and for me. The questions asked on stage also made me think about the relationship I have with Clint and the many turns that life will still put in front of us. The ending left me in tears as it did others in the audience.

The six members of this cast all played double-duty as two characters in the play. The costumes and change in character made this fact hardly detectable until the curtains had drawn, the audience moved into tears and all six actors and actresses took to the stage with Carey Perloff, to lead the post-play discussions.

There was a lot of interesting topics discussed in this post discussion. One audience member was quite vocal about how she loved ‘Boleros for the Disenchanted’ but did not like ‘War Music’ so much that she had walked out of it in the middle.

Carey Perloff was classy and acknowledged that people either love or hated ‘War Music’ and she heard from both camps. She did note that the repertoire of ACT was to try out new plays, not the ones that have toured the country and had already garnered mountains of accolades. Carey noted this play carried as much risk as ‘War Music’ since when ‘Boleros of the Disenchanted’ first debuted at the South Coast Repertory Theatre, the audience thought the sudden fast forward to Alabama 39 years later was too abrupt and they were more interested in what happened to Flora and Eusebio in their youth. Carey thought it worked at the A.C.T. because of the strength of the casting for the older Flora (played by Rachel Ticotin) and Eusebio (played by Robert Beltran). I would agree with this comment. There is not a lot of embellishments of scenery or song-and-dance in the second half and adding interest to a character that was immobilized in bed as the older Eusebio was and walking only back and forth by the older Flora is a tall order for any actor.

Several audience members also agreed that the themes treated in this play are universal to any immigrant family that made the travel to the U.S. to seek a better life. I remember the part where the older Eusebio commented on the jobs he had to take in the U.S. to feed his family such as flipping burgers or being a janitor at a high school and being one day taunted by the sports team with jock straps and tampons. My parents who immigrated from China when they first arrived had to take on jobs they had never done before. My mom worked at a toy manufacturing company at first combing the hair on the heads of dolls that would roll off a conveyor belt for minimum wage.

The issues of anti-American sentiment and how the play would translate into Spanish for a Latin American audience were also discussed. One comment I must make regarding ‘War Music’ (which I didn’t like) and ‘Boleros for the Disenchanted’ (which I really liked) is that I admire the A.C.T. for taking on issues and topics so relevant to the current dialogue. 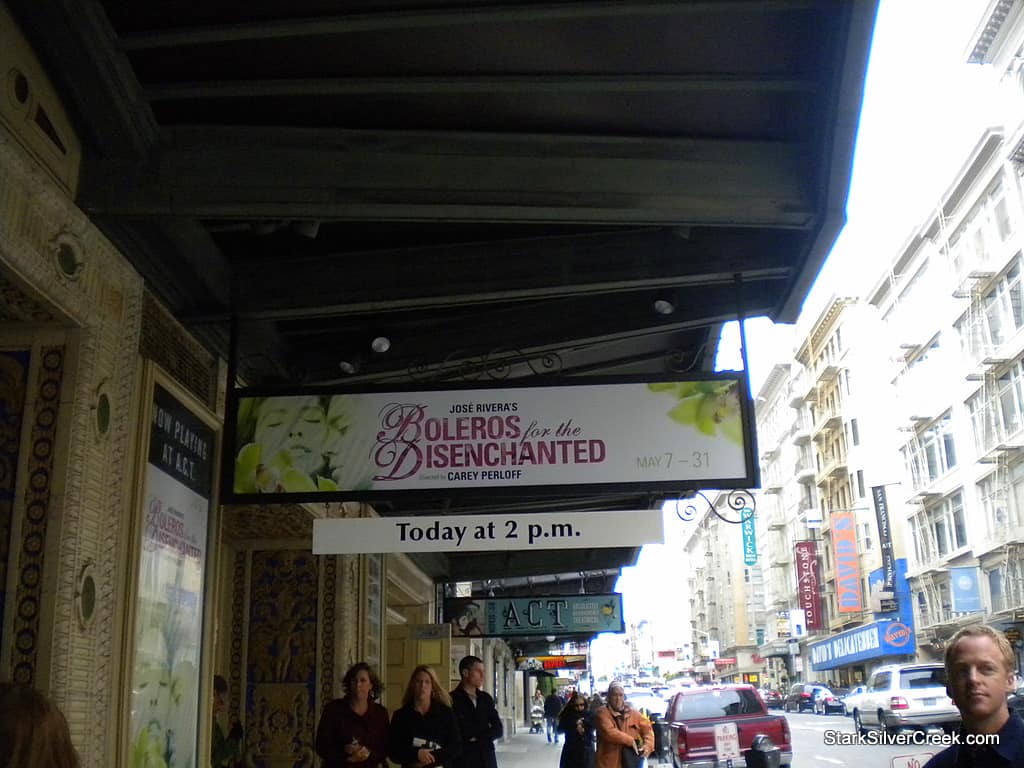