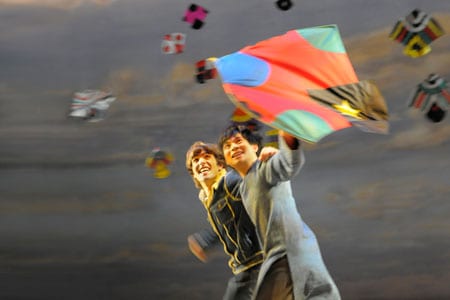 5 out of 5 stars - 'Outstanding - Starkie!'
San Jose Repertory Theater
Directed by David Ira Goldstein
Based on the novel by Khaled Hosseini, Adapted by Matthew Spangler
Review by Loni Stark

(Update: after you read the review below, check out the behind the scenes interviews with the cast of The Kite Runner available exclusively on Stark Insider)

My steps were hurried now, in excited anticipation as my eyes caught the first glimpse of the San Jose Repertory Theatre in the distance. In front: a lit billboard rolls the time and weather…it fades…contact information for the professional theatre house…it fades.

And then, there it was, cast brightly into the warm San Jose downtown air, “Hitachi DS Presents The World Premiere of ‘THE KITE RUNNER’ March 21 – April 19”. Behind glass windows, I caught glimpses of people sitting, sipping beverages and mingling in anticipation of the special event ahead.

I read Khaled Hosseini’s novel, ‘The Kite Runner’, over a year ago and still to this day, recall the story vividly. Even after these images fade, the emotional impact does not. And so I wondered. How would such a powerful story translate into a stage play? Cautious of how the complex internal struggle of the narrator Amir would be revealed when bound by the physics of a stage; perplexed about how the most disturbing of events in the novel would be depicted with real life actors.

As a prelude to the play, on the second floor gallery, is Joseph Hoyt’s black and white photography exhibit, ‘Afghanistan 1970-1975: Images From an Era of Peace’.

The photos capture an era of peace, so different from the Afghanistan we see blasted across news channels these days. As the start of the play drew near, the gallery was alive with people taking in the sights of Afghanistan through the lens of Joseph Hoyt at a time when he could not fathom how rare these scenes in Afghan life would become.

The sound of bells signaled the start of the opening night performance and like a swarm of bees, people emptied the gallery and café and poured into fill the seats in the theatre. It was a sold out night.

The stage was simply set with an artfully lit blue sky and colorful kites. Left stage, a tabla sits in the foreground. I thought the latter was a prop. I was wonderfully mistaken. As the opening scene begins, Salar Nader appears and works his magic adding the ambiance and authenticity only a live performance can muster.

One of my curiosities was put to rest from the onset. The grown-up Amir (Barzin Akhavan), anchors the production and like in the novel, narrates his thoughts and recollections of the past. A younger Amir (Craig Piaget) personifies these memories of his relationship with Hassan (Lowell Abellon): playing Cowboys and Indians, reading stories to Hassan and, of course, flying kites.

Piaget expertly conveys young Amir and the awkwardness of a boy coming of age; his yearning for his father’s love after his mother passes away during child birth and the struggle to have the courage “to be good” in a complex society where lines are drawn between ethnic and religious factions.

Abellon quickly wins the audience over with his sincere performance of Hassan, the loyal servant and friend who reveres Amir — his first words were “Amir”. I was touched with the performance of unwavering loyalty and sacrifice which provides the needed context for understanding Amir’s internal struggle and his desire to forget.

Usually, a play, musical or opera has a weak link. However, the cast of ‘The Kite Runner’ was uniformly strong with several actors and actresses filling multiple roles. I was astonished that Rinabeth Apostol, who played Soraya, Amir’s love interest, was also the comical Mrs. Nguyen of the convenience shop.

However, the star of the show is Barzin Akhavan, who plays the grown-up Amir. He starts with a solid performance as the narrator of his own memories. But in the second half he commands the stage and truly shines. The versatility of his performance is an incredible spectacle, reaching a climax when he prays for the life of Hassan’s son. The spotlight shines on him, the stage set becomes irrelevant and emotion pours out. It was as moving and powerful as any tragic opera I’ve seen.

The script for the play is well constructed, pulling in key elements of the novel without losing the complexity or nuances. A monumental task that if not done right could have doomed the entire project from the outset.

Scenes from the novel, such as when Baba tells Amir that there is only one sin, that of theft, are poignant and I was glad to see them highlighted in the play. Other times, comedic lines are delivered for relief. Rahim’s “There is no more Afghan way to die than stepping on a landmine.” line made me want to check the novel to see if it was a quote pulled from Khaled Hosseini, or the artistic liberty and creativity of the playwright, Matthew Spangler.

The pacing of the play is perfect, with the director cleverly weaving in grown-up Amir – without dominating – to bind the past and present. The most disturbing and graphic events from the novel are tastefully, yet poignantly, communicated. The director strikes the artful balance between what is explicitly shown, and what to leave to the viewer’s imagination.

The stage sets are creative and effective, without being distracting. Overall, each component of the play came together well: the dialog, action, pacing, music and lighting.

The result is an impressive tour de force. When the play ended, a thousand splendid claps could be heard. A standing ovation it was, nothing else from the audience would have done this play justice.

This was a complete surprise. I expected this play to be good. But not this good. It’s about as entertaining and emotional as anything I can recall in recent memory, and a special way to spend 2 and a half hours.

I suspect the presence of author Khaled Hosseini, along with a packed, opening house crowd, helped push the needle. You could see it in the vigorous, all-out acting. Sweat, spit and wide-eyed emotion enveloped the SJ Rep, and had me riveted from start to finish.

There are many standout scenes.

The kite fighting, in particular, is a great example of clever storytelling and direction. With narry a prop, we are taken through a nail biting and exhilarating kite fight in Afghanistan, watching the actors pull, spin, and twirl on stage as they look up to the ceiling at imaginary kites. Barzin Akhavan’s (Amir) narration starts casually, then arcs with drama, and crescendos brilliantly. I never thought an imaginary kite fight could be so dramatic!

There is a Sixth Sense-like reveal that won’t surprise those that have read the book (or read the unfortunate spoiler without warning on the Wikipedia entry for The Kite Runner), but had me completely fooled (not hard to do). What I enjoyed about that scene, and others throughout the play, is the use of silence for dramatic emphasis. It never feels forced. And serves to accentuate the moment.

Having not read the book I wasn’t quite expecting some of the graphic language and imagery that Loni alludes to in her review above. It is handled with class and heightens the events that follow. After all, this is Afghanistan and life is not easy.

Mid-way through, the play shifts tempo as Amir and his father flee Afghanistan and the Taliban, to the San Francisco Bay Area. Here, the mood lightens and we’re allowed to enjoy the fanciful adventure of this young Afghani making his way in a new world of Duran Duran, tall buildings, technology and dating.

Usually I’m hyper-critical and sensitive to stage acting, especially at the regional level. I immediately pickup on problems with lines, delivery and authenticity. It can break the mood faster than anything else in my opinion. This was not the case on this evening. The cast are, again as Loni mentions, strong. Well cast, with perhaps a minor exception.

The star is Barzin Akhavan who’s prayer scene was just great, great, great. Wow. Kneeling down, slamming his hands on the stage, he calls for the savior of his young nephew, in a final act that would bring him full circle in his journey for atonement.

Joking aside, this is a monumental achievement, and testament to the quality of what regional stage theater can accomplish in the hands of a strong story, excellent cast and gifted directing. Well done!