When you’re in Loreto next time, why not share news, photos and stories with everyone… on the fly? Capture the moment.  Loni twittered last time from Loreto. And now you can too, and blog as well. Details are coming on our little experiment.

Over Thanksgiving, why not load up Twitter on your laptop or cell phone? If you don’t know how, a niece or nephew can always help! Think of how hip you’ll be. Twitter. Blogging. Social networking. What’s next? A tattoo?

Read on to learn about Twitter and how to install…

Often called micro-blogging, Twitter is a simple form of communication using 140-character messages that enable people to stay in touch quickly. It’s also referred to as a form of “social networking” or Web 2.0 technology along with other popular sites such as Facebook (which tried to buy Twitter for $500M), MySpace, LinkedIn, Flickr and Youtube.
Twitter is not just for kids. Don’t be fooled, it’s becoming a mainstream phenomena that cuts across age and social strata. CEOs, VPs, venture capitalists use it here in Silicon Valley, to stay abreast on breaking deals, news and events.
Twitter for Apple iPhone
Twitter for BlackBerry
Twitter for your Laptop
Give it a go.
Also, we’ll be using emails too for dynamic on the fly updates to StarkSilverCreek… more details soon. 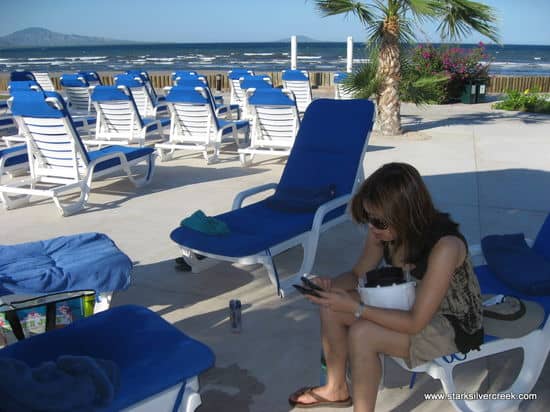 Loni tweets live poolsite from the Inn at Loreto Bay.
“…Sea of Cortez…world’s aquarium… never heard of it…”