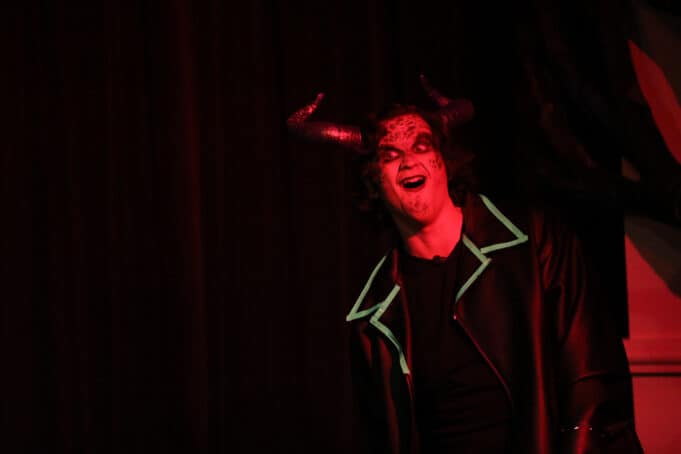 Playful People Productions has announced its 2022-23 season. The San Jose-based theater says its new season will run 8 months and feature plays and musicals for both adults and children and include fantasy, fairytales, classic literature, comedy, and drama.

Per the announcement email here are the details of the productions for 2022-23.

The Hundred Acre Wood comes to life when Playful People Productions presents an original adaptation of Winnie the Pooh, directed by Shannon Santandrea. Five casts of children, ages four to 11, will perform this new, one-hour adaptation of A.A. Milne’s classic 1926 children’s book, Winnie the Pooh, written by Katie D’Arcey. Christopher Robin and his friends Pooh Bear, Piglet, Eeyore, Rabbit, Owl, Kanga, Roo, and various other denizens of the forest adventure through such tales as “Pooh Gets Stuck,” “Eeyore Has a Birthday,” “An ‘Expotition’ to the North Pole,” and more. Winnie the Pooh performs Oct. 28—30, 2022.

Shrek, the Musical, directed by Emily Pennington, with choreography by Mary Theresa Capriles and Emily Pennington, is one of the biggest shows ever produced by Playful People Productions. Audiences can see their favorite characters — Shrek, Princess Fiona, Donkey, Lord Farquaad, Gingy the Gingerbread Man, Dragon, Pinocchio, and so many more — come to life on the stage. Based on the Oscar-winning DreamWorks Animation film, this is a Tony Award-winning fairy tale adventure, featuring all new songs from Jeanine Tesori (Thoroughly Modern Millie; Caroline, or Change) and a sidesplitting book by David Lindsay-Abaire. Two casts of teen and adult actors perform Nov. 4—13, 2022.

Described by Edward Albee as “the greatest American play ever written,” Our Town by Thornton Wilder presents the small town of Grover’s Corners in three acts: “Daily Life,” “Love and Marriage,” and “Death and Eternity.” Narrated by a stage manager and performed with minimal props and sets, the play depicts the simple daily lives of the Webb and Gibbs families as their children fall in love, marry, and eventually — in one of the most famous scenes in American theatre — die. Our Town will be directed by Stacy Levin. Suitable for ages 15 and up, video auditions will be accepted through Nov. 16, 2022, and in person call backs will be Nov. 29 — Dec. 1. Performances will be Feb. 24—26, 2023.

In the springtime, ages 4—11 can embrace their inner animals with Disney’s The Jungle Book KIDS. Specially adapted from the classic Disney animated film, this musical features a jazzy score, a host of colorful characters, and classic songs from the movie. Banished by the ferocious tiger Shere Khan, a human boy named Mowgli and his panther friend, Bagheera, are on the run in the deepest parts of the jungle. On their journey the two meet a sinister snake named Kaa, a herd of elephants, and a giant bear named Baloo, who teaches them the swingin’ musical rhythms of the jungle. After surviving a dangerous encounter with a band of monkeys led by King Louie, Mowgli and Bagheera are forced to run for their lives. When Shere Khan returns, our heroes must rally their fellow animals into battle and restore peace throughout the jungle. Directed by Shannon Santandrea, auditions will be held Feb. 27—28, and performances will be May 5—7, 2023.

Also in May is Starmites by Barry Keating and Stuart Ross, nominated for six Tony Awards including Best Musical, in a production for tweens, teens, and adults (11 to 111). Eleanor, a shy and quirky teenager, collects and obsesses over comic books, especially the series called Starmites! Unbeknownst to her, she holds the key to defeating the arch nemesis of innerspace — Shaak Graa. When she is suddenly transported into her favorite comic books, she must join the Starmites in their battle for innerspace and freedom, while escaping from the wild and dangerous Banshees, and their terrifyingly fabulous queen, Diva. Directed by Lysander Abadia, auditions will be Mar. 1—2, and performances held May 12—21, 2023.

Finally, Playful People Productions presents She Kills Monsters, a high-octane dramatic comedy, with performers ages 13 to 26. This 2011 play by Qui Nguyen follows Agnes Evans as she comes to terms with the death of her teenage sister, Tilly. As Agnes moves between reality and the fantasy role-playing game her sister loved, she will navigate homicidal fairies, nasty ogres, 90s pop culture — and discover Tilly’s own, unspoken exploration of her sexuality. A heart-pounding homage to the geek and warrior within us all, She Kills Monsters will be directed by Sara Tavernise. Video auditions will be accepted in early to mid-April, and the show performs June 30—July 2, 2023.

All camps, rehearsals and performances are held at the Historic Hoover Theater in downtown San Jose, California.

Playful People Productions was first founded in 2010 as a positive, inclusive, family-focused theatre company, and has operated as a 501(c)3 nonprofit since 2017. While initially providing classes, camps, and shows for kids, the company has grown to offer similar classes for adults, and stages multi-generational performances where family members can perform together.