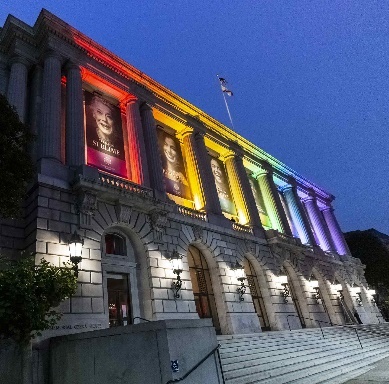 San Francisco Opera today announced its plans for celebrating Pride. After a three-year absence due to the pandemic and Covid-19, the non-profit announced Pride will return Saturday, June 18 with “Pride Night at the Opera.”

The 52nd Pride Parade is scheduled for the following weekend on Sunday, June 26.

“The Company celebrates and honors our LGBTQ+ artists, staff, audience and community, and the city’s connection to opera.”

From the announcement, more details below:

PRIDE NIGHT AT THE OPERA—SATURDAY, JUNE 18

With the exterior of the War Memorial Opera House glowing in rainbow colors, San Francisco Opera’s Pride Night at the Opera on June 18 offers attendees a pairing of the Company’s new production of Mozart’s Don Giovanni with a Pride party following the performance on the Dress Circle level of the War Memorial Opera House. Activities include a lip-sync competition, Best Pride Look prize, selfie stations, dancing and handcrafted beverages from Global Gourmet. All June 18 Don Giovanni ticketholders are invited to join in the fun with special guest host Donna Sachet from San Francisco Bay Times.

And more on the parade:

Stark Insider hopes to see you among the 100,000 celebrating this month in San Francisco!