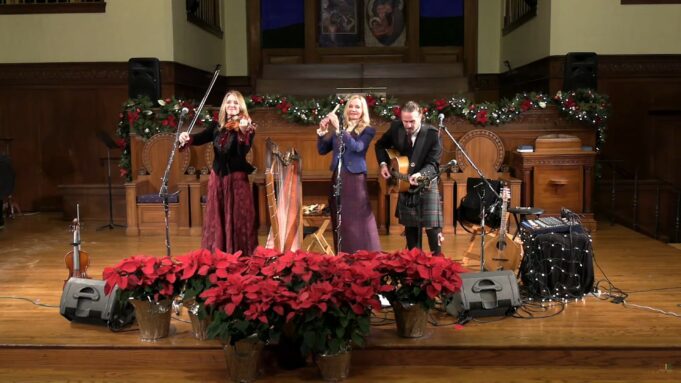 Christmas in a Celtic Land

Golden Bough is a Celtic music group famed for its winter concerts. Drawing from traditional carols of the United Kingdom, the music group has been celebrating Winter Solstice, the New Year and Christmas for 40 years.

Margie Butler, Kathy Sierra and Paul Espinoza play and sing together as family, bringing incredible warmth and gaiety to a bare stage in Old First Presbyterian Church in December of every year.

In 2021 the Golden Bough concert occurred on the actual day of Winter Solstice, and their presentation did not let this date go unnoticed. With skill, appreciation for craft and good humor, the trio conjured up earliest times of honoring the change in seasons, when winter ruled the land, as farmers stored up for the cold weather and hoped for an early spring.

They began with “Hey Ho Nobody Home,” a favorite of English carolers in the 16th century. “A Soul Cake” may date from ancient times, the celebration of Samhain. In medieval Europe it became acceptable for Christians to go souling, as a musical remembrance of the dead.

“The Wren” song may come from medieval Wales or Ireland, where the wren symbolized winter and had to be killed so spring would come. However the Brothers Grimm tell a different tale of origin, having to do with selecting a king. For some the wren is a rebirth symbol of the arts.

“Fruitcake Time” features a little holiday hilarity with hatchet and saw, written 2010. In the middle ages Christmas carolers went door to door, since they were banned from churches; “Going Door to Door” was written in 1899.

“Joy to the World” was played as an instrumental. Butler, Sierra and Espinoza are skilled on a variety of instruments – harp, violin, accordion, recorder, tin whistle, guitar, mandolin and drum. With invitations to sing along, with hand clapping, with laughter and palpable joy, the trio encouraged a musical contribution from the audience, and audience members responded with enthusiasm, even through their masks.

“All Souls Night” was both lively and haunting as the Golden Bough musicians and singers evoked the ritual dancing and bonfires of Samhain, an ancient Gaelic festival celebrating the end of harvest and the beginning of winter.

“The Wassail Song” has rich origins dating to ancient Britain, and celebrates the New Year. Gaelic custom involved singing to spirits and trees in hopes of good harvest. By the 12th century, drinking ale or meade to celebrate the New Year had become a popular practice. The festive evening ended with “Newborn King,” lyrics by Paul Baloche.

A few words about the talented members of the Golden Bough. Paul Espinosa is a singer, songwriter, poet, music arranger and producer. He plays guitar, mandolin and accordion. Marge Butler is a harper, vocalist and teacher. Kathy Sierra is a classically trained violinist and vocalist; she also is skilled on the viola and tin-whistle.

Old First Church concert series was founded in 1970. Presenting concerts in Euro-classical music, American jazz and new world music, Old First is justifiably proud of its inclusive community of music lovers. The music series is completely separate from church religious activities and has its own nonprofit. See oldfirstconcerts.org for more information on upcoming events.