My first out-of-state road trip after getting sprung from lock-down was driving around Tennessee and Alabama. For some reason I had been jonesing for some authentic “Q”, getting politely ma’amed, and listening to some soulful singers…IN PERSON!

If you’re planning a trip down south, here are three, don’t-you-dare-miss stops for music lovers.

Why is downtown Nashville’s, National Museum of African American Music my top pick? Because this unparalleled museum is the only one on the planet that is “dedicated to educating, preserving, and celebrating more than 50 music genres and styles that were created, influenced or inspired by African Americans.”

Although the official opening this year was Martin Luther King Jr. Day, NMAAM president and CEO H. Beecher Hicks III said in a press release, “We have been preparing for this day for more than 20 years, but this museum has actually been more than 400 years in the making. We look forward to welcoming music lovers from around the world to this magnificent cultural experience . . . as we celebrate the history of African American music, which truly is the soundtrack of our nation.”

You will need to plan some serious (though super fun) time to fully explore this 56,00-square-foot museum which integrates history and interactive technology in showcasing the evolution of African American music starting from early gospel, blues, jazz, R&B to hip-hop.

A sampling of unique hands-on displays include stepping into a sound booth to where you can belt out “Wade in the Water” at the top of your lungs accompanied by a gospel choir, putting together the saddest “my baby left me on the side of the road” lyrics for your own Blues tune or maybe you’d rather learn to play the one-string diddley bow.

Be sure and check out their calendar for special events. For example, this month they are celebrating the Sound of Black Nashville!

This next one is kismet because I  just happened to hear (ok, so maybe I was eavesdropping a bit) some music aficionados at the museum raving about a recent show at Backstage Nashville which I had never heard of. I turned aside to Google it and after reading that it was a songwriters show that was described as “where the Grand Ole Opry meets the Bluebird Cafe” I immediately bought tickets for only $20!

The showcase is Saturday afternoons at 12:30 PM, and combines country music’s top songwriters with Nashville’s hottest rising stars at the legendary 3rd & Lindsley space. Not only is the intimate, scaled down music incredible but it’s fascinating to hear the stories behind them. The easy camaraderie between the songwriters and the audience makes it seem like you’re dishing with best friends.

I loved it when they said they thrive on misery — being dumped by the love of your life is just fodder for your next big hit. These talented songwriters have written hits for Garth Brooks, Taylor Swift, Kenny Chesney, Blake Shelton, Kelly Clarkson, and Reba McEntire, to name just a few. 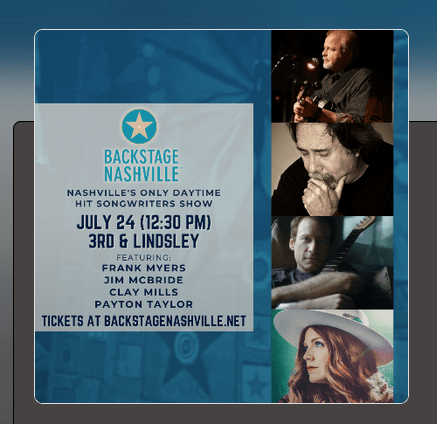 Seriously, you do not want to miss this so be sure to book your tickets in advance.

For this last one you’re going to head a bit out of town, about 25 miles to one-block town of Leiper’s Fork. Holding court in the center of town since 1953  is the Original Puckett’s Grocery and Restaurant, where you can grab a local beer and chow-down on some flavorful, wood-smoked meat and three, or their award-winning burger, while listening to a wide array of musical talent.

While Puckett’s hosts live music almost every night of the week, try and make the exceedingly popular Open Mic Night on Thursday’s. Although you’ll get a potluck of performers, this just adds to the fun.

The night I was there the roster ran the gamut from an extremely talented first-timer, a nostalgic has-been, all the way to a one-baby-step from fame country western singer.