Most air purifiers we’ve reviewed here on Stark Insider while mostly practical and useful to home owners are typically not the prettiest things ever.

Sweden-based Blueair has often been the exception. Their pretty air purifiers such as the Blue Pure 211/211+ and 411/411+ have been praised as much for their effectiveness as they have been for their aesthetics. A lot of that has to do with the soft fabrics used as pre-filters on the outer casing.

Now, Blueair has announced a new line that appears to carry on the tradition.

Dubbed the DustMagnet series, there’s 3 new models with prices ranging from $289-$399 USD. That makes them more expensive than a typical entry unit from Coway or Winix, but it might be worth it for those looking for a marquee brand name and fashion forward design when it comes to home appliances. Besides, Blueair has never been one to compete on price.

Here’s a quick look at the line-up:

All prices in USD.

And the 4 specific models:

Blueair claims the new air purifiers will catch 99.97% of dust before it settles using something the company calls “HEPASilent.”

And on its filtration technology the company says:

“Our unique filtration technology that we call HEPASilent sets us apart. The combination of electrostatic and mechanical filtration allows us to use filters that are less dense and require less air pressure than traditional HEPA filters without a loss in performance — resulting in quieter and more energy efficient air purifiers.” 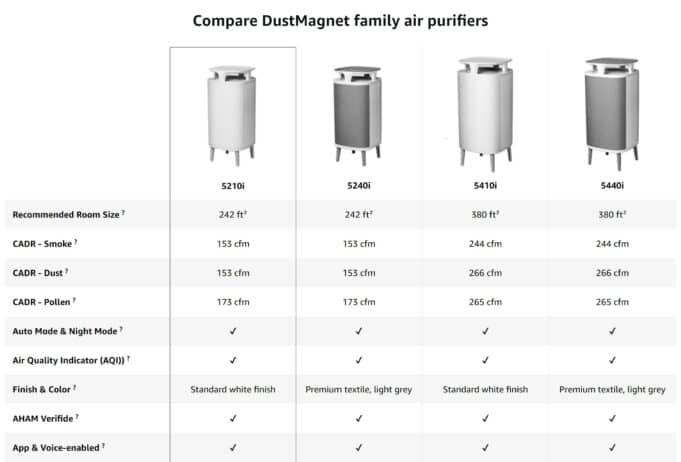 Unlike the Blueair Blue Pure 211 and 411 models the DustMagnet feature smart sensors that detect air quality (and a LED display that shows status across 5 levels from polluted to excellent) and automatically turn the fan on higher as needed. In addition they can be controlled with iOS and Android devices by using the Blueair app.

Pollutants that the DustMagnet can trap include:

Further, unlike many air purifiers today that have only a single inlet, all of the DustMagnet models share the same basic design which includes a dual inlet and outlet system. In addition, the top is specifically designed to also be used when needed as a side table. A clever touch we’ve not seen before: 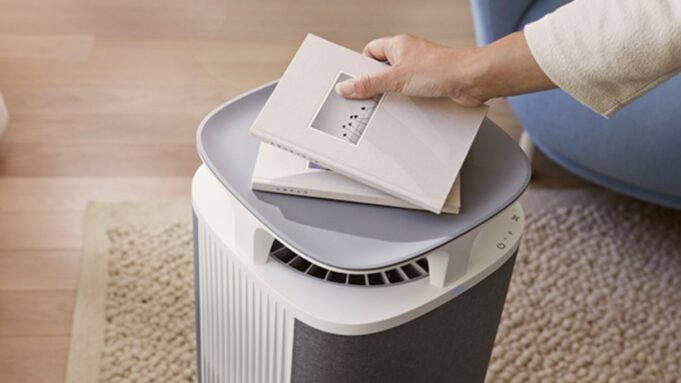 Also there are dual filters (“ComboFilters”) including not only a particle filter, but also ones with carbon particles — a key element used to effectively combat gas and VOCs.

You can pre-order Blueair DustMagnet 5200 and 5400 Series air purifiers on Amazon.