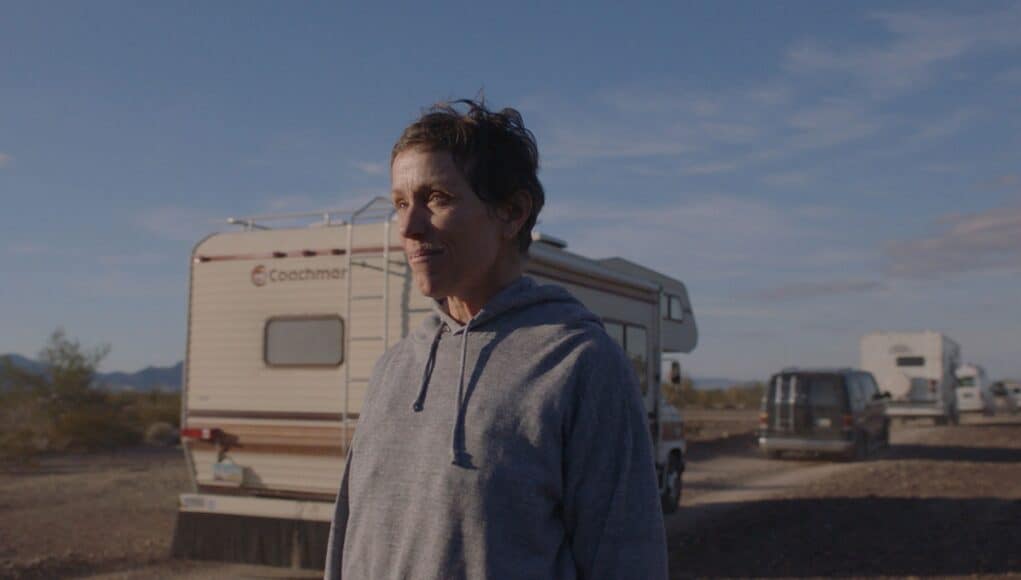 4 out of 5 stars – ‘Highly Recommended’
Directed and screenplay by Chloé Zhao
Based on the book by Jessica Bruder
Starring Frances McDormand, David Strathairn, Linda May
R | 1h 48min | Drama | 2021 (USA)

Frances McDormand delivers an unforgettable performance as a widow rendered newly homeless by the cascading effects of the 2008-2009 worldwide depression; and she takes to the open road in her van, without knowing what may be ahead for her.

Adapted by Zhao from Jessica Bruder’s book of the same name, Nomadland introduces the viewer to a world of nomads, Americans aged 50 to 80, who live in their vans or RVs, and travel from state to state based on weather conditions and availability of work.

Most of these men and women worked all their lives. Many lost jobs in the financial crash of 2008. By 2010 more than a million homes had been repossessed. Some moved in with relatives for a time. Many became nomads.

What Zhao does here and in her previous movies — The Rider and Songs My Brothers Taught Me — is mix professional actors with ordinary citizens who play themselves in fictionalized form. Besides McDormand, the other professional actor is David Strathairn. Longtime nomads Linda May and Swankie round out the cast, and deliver deeply touching performances as they share the road and their experiences with Fern (McDormand).

There is no preaching here, only an understated and revealing portrait of what was and is. With the closing of a gypsum mine and a sheetrock factory in Empire, Nevada in January 2011, the company town ceases to exist. Hundreds lose their jobs. Six months later the Post Office eliminates the zip code for Empire.

Fern takes a few possessions from her storage locker on an icy December day and drives through the night to an RV park for Amazon seasonal employees. She has found work for the holidays, with free parking for her van. It is here that she meets Linda May and many others in situations comparable to hers.

This is temporary, Fern tells herself. When she runs into a former neighbor, whose children she had tutored, one of the children asks, “Are you homeless?” Fern says no; she is simply houseless, and she refuses the offer of shelter from her former neighbor.

Linda May recommends an annual event for campers in Arizona — the Rubber Tramp Rendezvoux. Seeking warmer weather, Fern drives to Arizona and finds a world new to her. Hundreds of nomads sit listening to charismatic Bob Wells, as he encourages them to continue forming a positive supportive community, to help each other.

This is one of many camps and several states Fern will visit as she drives where work is to be found — franchise restaurants, construction sites, farm harvests, camp site cleanups. No work is too hard or beneath her, and that philosophy applies to the other nomads as well. Travelers need income to repair their campers and vans, pay for cell phones and feed themselves.

In scene after scene the director allows the characters to speak for themselves as they seek work, perform their jobs, greet each other, help out at campsites, attend a swap meet, participate in singalongs or line dancing.

Content with this new way of life for a long time, Fern keeps to herself as she walks through an RV camp. When driving between seasonal jobs, she stops near wilderness to wander quietly among trees or to bathe in a stream. She watches sunrise and sunset almost as sacred rites. And at night in her camper, she looks at family photo albums — her late husband, her parents, her childhood.

The nomadic way of life works when there is community.

Cinematographer Joshua James Richards harnesses what sometimes is called the magic hour, the 20 minute window just before sunset. He and director Chloe Zhao traveled with the nomads a while before filming, so as to be able to film them from inside their world and not outside. Richards said in an interview, “you’re constantly looking at how people’s faces are in what light.” (Variety, December 3, 2020). The result is a warm and welcoming portrait where the beauty and comfort of Nature are shown to be an essential part of this existence.

There is pain and loss, yes, as set forth so well in Lillian Rubin’s “Worlds of Pain” and Barbara Ehrenreich’s “Nickel and Dimed,” but director Zhao has chosen to emphasize the strength and quiet determination of these people. The nomadic way of life works when there is community.

The music created by Ludovico Einaudi is mesmerizing. The soundtrack includes tracks from Einaudi’s “Seven Days Walking” project, inspired by the composer’s walks in the Italian Alps.

A thoughtful film, beautifully edited by the director. Highly recommended.