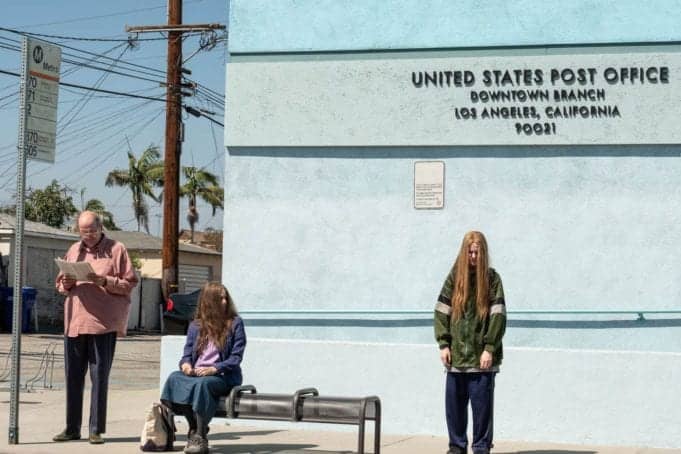 Miranda July first came to the attention of many in 2001 through her collection of short stories, “No One Belongs Here More Than You.” The daughter of two writers from Vermont, Miranda was raised in California, and seems to move easily between writing fiction, doing performance art and making films.

Kajillionaire is her third feature film, after The Future, and Me and You and Everyone We Know. Set in sunny southern California, the film introduces us to three characters who live their lives in the shadows, seeming to survive in spaces where even a dandelion would have trouble getting through a week.

Debra Winger excels as a woman who has settled for a life on the edge of society, a con artist as skilled as her long-time husband, Richard Jenkins. They speak the same language as they literally shuffle along sidewalks, trailed by their shy, anti-social daughter who is 26 but has the body language of a 16 year old.

Theresa (Winger) and Robert (Jenkins) raised their daughter to be a crafty crook and flimflammer from the time she was born. Old Dolio, as she is called, dresses like someone it is safe to ignore, which makes it easy for her to break into mailboxes and engage in all manner of quiet chicanery, because these are natural activities for her family.

Evan Rachel Wood sank her teeth into the character of Old Dolio and is almost unrecognizable at first. Creative and obedient, Old Dolio seeks to grow in her parents’ eyes, but also seems to be searching for more. Opening her eyes to possibilities she did not know existed brings sweetness and sadness to the film.

We see her development as she accepts $20 to substitute for a young woman who is required to attend a meeting for expectant mothers. Pocketing the money, Old Dolio rearranges her layers of clothing to resemble a gently blooming mother-to-be and walks into the meeting. In so doing, Old Dolio begins a journey into self awareness.

Ironic humor and outright silliness enliven this portrait of a family living in the corners of society, until circumstances bring them in touch with a lively stranger named Melanie (Gina Rodriguez). Vivacious and talkative, Melanie and Robert take the measure of each other, and a scheme is hatched to make money for all of them.

Old Dolio is confused about the addition of a fourth person; it has always been just the three of them. Kajillionaire revolves around their interaction as they are faced with challenges in making the latest scheme pay off.

As writer and director, Miranda July creates wacky and wistful moments as the characters move back and forth between their barebones existence and their encounters with a more comfortable conventional world. They require very little to be happy. However, Robert and Theresa fail to notice that Old Dolio is seeking more than the thin slice of life they have served to her.

Why doesn’t Melanie wear more clothes, Old Dolio wonders? Why do Robert and Theresa respect Melanie’s tender feelings without realizing that Old Dolio may have such feelings too, without knowing how to express them? Who is loyal to whom, at this point?

Throughout it all, southern Los Angeles trembles in a series of earthquakes, most of which are small ones, all of which are symbolic.

Miranda July had fun with this film, and you will too. Recommended.