If “imitation is the sincerest form of flattery” then I have the perfect itinerary for you to follow next time you’re traveling to Louisiana. I recently returned from Baton Rouge, L.A., who was hosting this year’s Travel South Showcase, the premier, southern marketplace event for over 500 tourism professionals.  Before the grand event, journalists can choose a themed pre-trip to fit their interests. Mine was “An Adventure to Savor”, which certainly lived up to its name, since we were wined and dined, and rum-ed and beer-ed in fabulous style, while hopscotching all around Southern Louisiana.

Here are the highlights of our tour (roundtrip driving from Baton Rouge) for you to copy!

This sweet folk-life museum tells the story of sugar farming from slavery times through the Civil Rights era, complete with a model of a 1904, 22-foot working sugar mill.

The 6-acre campus houses five historic structures including an 1850 slave cabin, an authentic plantation store, and even a “smithy” where you can watch blacksmiths forging iron. Check their music schedule for some lively events such as their Cajun French Music Jams.

“I have a dream” came true for founder Karlos Knott when he opened Bayou Teche Brewing ten years ago. His dream was to craft beers that promote and complement Cajun cuisine and traditions.

To this end he uses local herbs, flowers and seasonings in his unique brews, which includes some zany flavors such as Gumbo and Boudin Beers! There is also a full calendar of live music to enjoy while scarfin’ down their Cajun Saucer Wood Fired Pizza.

Half bar and half Cajun eatery, this is THE place for authentic Cajun cuisine. Try to nab a spot on the back deck where you can sip your sweet tea while overlooking the bayou.

Although sugarcane, the backbone of a fine rum, has been grown in Louisiana since the 1700’s, there had not been a premium rum company in the state until Bayou Rum opened in 2011. It has since won over 100 awards and is considered the #1 Craft Rum in America.

After viewing a short film and a distillery tour, you’ll want to linger at the tasting bar where you can sample the white, spiced, and even a new pink, hand crafted and copper pot distilled rums.

You’ll ooh and ahh as you drive or walk around the 40-blocks of downtown Lake Charles historic district, which is filled with stunning Victorian homes dating from the late 1800s. It’s named Charpentier (carpenter in French) because many of the homes were designed and built by carpenters rather than actual architects, which resulted in some wildly creative homes featuring turrets, towers and gingerbread gables.

Stop in at Lake Charles CVB to pick up a tour map and to sign up for their haunting Ghost Tour.

I’m not usually a fan of casino hotels since I dislike the usual gambling hubbub but I actually gave a small sob when it was time to checkout of my luxurious suite. Not only were the spacious suites elegantly appointed, my XXL bathroom featured the most wonderful claw-foot tub! 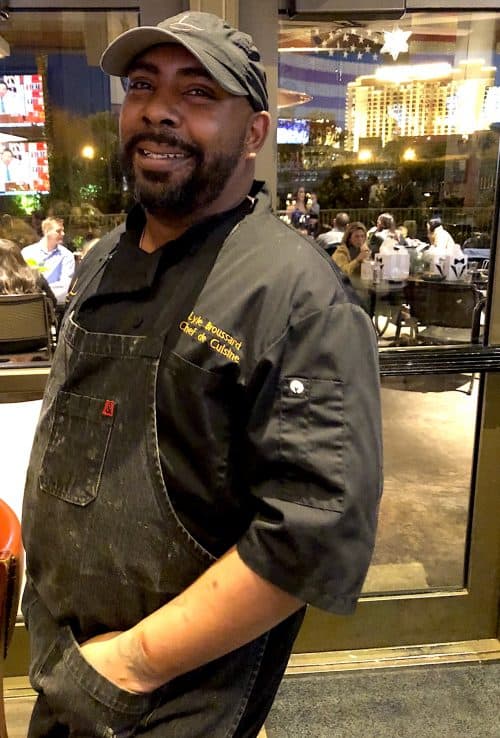 There are 6 in-house restaurants to choose from but for sure you’ll want to have at last one meal at the Jack Daniel’s Bar & Grill. The must-try here is Chef Lyle Broussard’s signature “Redfish on the Half-Shell” and any of his tasty starters including the best boudin balls of the trip. 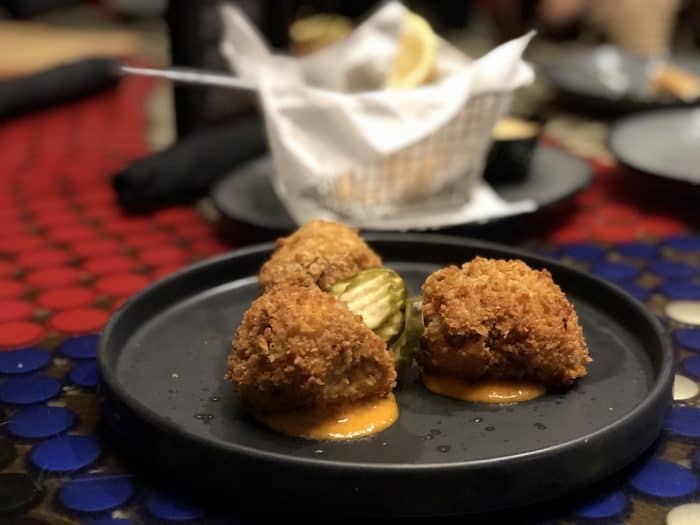 Best boudin bites of the trip.

Visit the impressive 1911 Lake Charles Historic City Hall Arts and Cultural Center. After an extensive restoration, the gallery has hosted an amazing array of traveling exhibitions.

We were lucky enough to be there for a JFK Life and Times photography exhibit, but other big name solo exhibitions have included the works of Pablo Picasso, Ansel Adams, and Norman Rockwell, thanks to all those casino dollars!

Bragging rights for the largest display of Mardi Gras costumes in the world, the museum’s six rooms display a plethora of artifacts showcasing the history of the festival. You’ll learn what goes on behind the scenes when building a parade float, designing an elaborate costume (using ostrich feathers can jack up the cost to $10,000) and why there is a baby Jesus baked into every luscious king cake.

You can build-your-own flavor combo, choose one of her gourmet “boys” including Shrimp Reauxmoulade, Cajun meatball, or Kicken chicken peauxboys, or go for her justifiably famous Crawfish Boil peauxboy.

What started as a random convo around the Avery family dinner table six years ago has developed into a highly successful boozy business. This craft brewery/taproom/bistro is best known for their “easy drinking” Louisiana Lager and Hop Blooded IPA, however, you’ll want to keep an eye out for their seasonal and wildly creative brews from their 15+ beers currently on tap. No need for dessert after trying their “Drunk in Love – Chocolate Covered Cherry Milk Stout”. This is another good live music venue.

Crying Eagle is a fun choice for Sunday brunch where you must order their signature Beer Battered Chicken and Waffles. They brine the chicken for hours in their IPA which accounts for the tender meat.

The Gator Chateau is possibly the best rest stop in the country. Sure, it’s an immaculate visitor center with tons of tourist info and complimentary coffee, but the real reason it get’s my vote is because it’s also home to rescued baby alligators that will be fostered until they are able to be released into their natural habitat.

The caring alligator docents enthusiastically teach you about the gators habits and diets, if you ask nicely, you can even hold the babies!

Q: What do you get when you mix fine Cajun cuisine with famous Blue Dog paintings by George Rodrigue?

A: Blue Dog Café, a convivial restaurant owned and operated by artist George Rodrigue’s sons, Andre and Jacques. They kick-started their 20th year by reintroducing their Top 10 original menu favorites like Corn and Crab Bisque, Seafood Wontons, and Crawfish Enchiladas to enjoy under the watchful eyes of the iconic Blue Dogs which line the walls.

After din head over to the Blue Moon Saloon which also opened about 20 years ago on the back porch of the Blue Moon Guesthouse. It has morphed into one of the country’s premier music joints for local Zydeco, Cajun, blues, folk, and jazz.

Day Three- Back to Baton Rouge via New Iberia

I have finally met someone who is more passionate about food than I am… just check out her colorful 14-passenger bus bejeweled with strands of mini Tabasco bottles! A former Louisiana history teacher, Marie Ducote-Comeaux loves sharing her knowledge about all things Cajun: the unique people, tasty food and fascinating history. It’s no wonder that her food tours are ranked #1 of the best things to do in Lafayette, LA on Trip Advisor.

On the original Cajun Food tour, you’ll make five tasting stops for the “best-of-the-best” iconic Cajun dishes (from spicy boudin bites at Johnson’s Boucaniere to shrimp poor boys at Olde Tyme Grocery) while hearing the background dish on each restaurant.

Hipster twists on the classics can be found at Bread & Circus Provisions, such as their Bou–nuts: a happy marriage between a Boudin and donut. Paired with one of their stellar Bloody Mary (made with Chef/owner Manny Augello’s homemade Worcestershire sauce) makes the perfect Cajun start to your day.

Centrally perched on historic Jefferson Island (which is actually a salt dome) the 15 acre, Rip Van Winkle Gardens are well worth a lengthy stroll no matter what the season, while you await your tour of the Joseph Jefferson Mansion. Built in 1870, this Victorian stunner was home to Joseph Jefferson, the most celebrated stage actor of his time having performed the part of Rip Van Winkle over 4500 times! Our costumed guide kept us riveted with her scandalous tales while pointing out some unusual antiques such as a glass mosquito catcher.

While it’s good for an hour, it’s even better for an overnight since you can stay in one of the cozy Rip Van Winkle cottages, enjoying a glass of wine on the veranda while taking in the sunset over the lake.