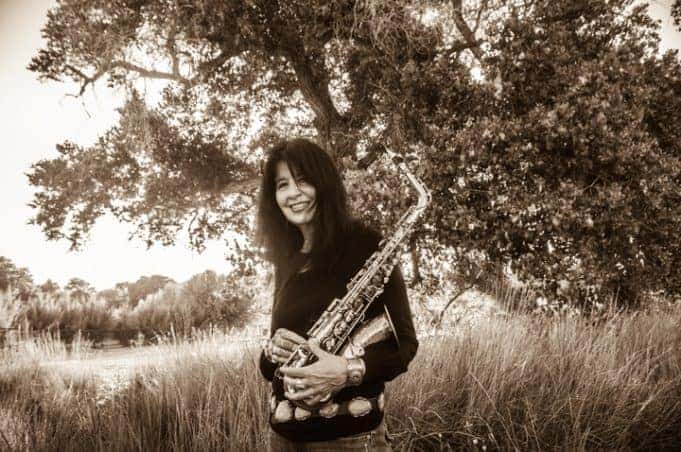 4.5 out of 5 stars - 'Right on the Money'
Jewish Community Center of SF (JCCSF)
Review by Jeanne Powell

As we enter the winter season, what better way to honor all that we have and all that we need to remember, than to listen to the first Native American poet laureate of the United States, Joy Harjo. Recently she spent an evening with an attentive audience at the JCCSF.

In talking with her audience at the JCCSF, Harjo made sure they knew the difference between the dreaded Indian schools where Native people were deprived of their heritage, and the Institute of American Indian Arts (IAIA). She said being assigned to the IAIA saved her life, with its emphasis on intertribal Native artistic development —  visual art, theater and music — where students could speak their native languages. (iaia.edu)

Artists always are looking a little ahead, she said; Spirit takes you into places and you bring back what is needed for the earth.    And later she shared that if you bear a great gift, there are challenges you face, to bring that gift to fruition.

Harjo has championed the art of poetry for four generations.  She calls it “soul talk.”  She is the author of nine volumes of poetry and a 2012 memoir entitled Crazy Brave. She has produced five CDs, including a new album of traditional flute music, entitled Red Dreams — A Trail Beyond Tears.

Not all libraries have books, she stated. There are many kinds of libraries. And she proceeded to enthrall the audience with sharing from her libraries. Her first poem was a welcoming song; she played a flute to introduce it. The second was Calling the Spirit Back. We can lose parts of ourselves as we walk along in our life-storm, Harjo said. This song helps call the spirit back:

–take a breath offered by friendly winds;
–let the earth stabilize your post-colonial urban jitters;
–watch your mind.  Without training it may run away;
–cut the ties you have to failure and shame;
–welcome your spirit back from its wandering.

And then, help the next person find their way through the dark.

In Once the World Was Perfect, Harjo shared a creation song, accompanying herself on a soprano saxophone.  She advised us that a saxophone can be a trickster instrument! Rabbit is also a trickster in the Muscogee Creek nation. Tricksters often sit near seats of power to remind us that power is to be shared. She played the flute and recited, “in a world before this one . . .  She pointed out that under rabbit’s influence we lost track of our ancestors.

Throughout her reciting Harjo was playful, poignant, evocative and rhythmic, drawing the audience into her world.  She is an outstanding teacher. Later in the evening she said a fierce teacher once told her to “be yourself”, which can be hard to do as a human.

This Morning I Pray for My Enemy is a poem in which she talks about the heart being the smaller cousin of the sun. The door to the mind can only be entered through the heart.

Harjo touched on many subjects with which the audience could identify. She spoke of her mother’s Underwood typewriter where her mom wrote songs before having four kids. She spoke of childbirth as a sacred powerful doorway, with death always present nearby. And she wrote “Washing My Mother’s Body” after her mother’s death. “I return to take care of things in memory, so my spirit can move on.” There was the iron pot handed down in her mother’s Cherokee family since the Trail of Tears.  Her mom wrote notes in a journal for Joy to find.  And Harjo asked the angels — in whom her mom believed — to take her mother safely home.

“I return to take care of things in memory, so my spirit can move on.”

In a piece called Honoring, Harjo reminded us to ask who grows our food? How do you treat your plants and animals? Who makes our clothes? She speaks of the immense house of beauty and pain.

In the poem, My Man’s Feet, Harjo reminds us that every poem has ancestors. The ancestor for this one is Lucille Clifton’s poem, Homage to My Hips, which can be found in youtube videos.

My House is The Red Earth is a give-back, to say thank you to these lands. The earth likes to be remembered, she said. “My house is the red earth.  It could be the center of the world.” She accompanied herself on soprano sax, and spoke of her excitement in talking on the phone with Wayne Shorter, celebrated saxophonist and jazz icon.

And Joy Harjo completed the evening with a reminder that it is important to thank the physical space. We are on Ohlone land.  Remember the sky you were born under. Remember  the earth whose skin we are. Remember the wind; remember her voice.

The audience will long remember this immensely talented poet. A line of people waited to buy her latest book and to get her autograph.  Among those beaming in the audience was Berkeley poet laureate Rafael Jesus Gonzalez.

The JCCSF is a popular venue serving all of San Francisco with a variety of events from health and fitness, to arts and ideas, from after-school programs to events for elders. Paid membership is open to all. A popular evening event is the Giants of Jazz on Film with host Mark Cantor.  Next February he will be joined by the Marcus Shelby Quartet to celebrate the Harlem Renaissance at 100.  Poet Danez Smith will be featured in January. Also featured that month will be Peggy Orenstein, author of Boys & Sex.  Partners for the Orenstein appearance include The Writers Grotto and Huckleberry Youth. The JCCSF media sponsor is KALW radio.  And the JCCSF is the recipient of grants from a number of foundations for its Arts & Ideas programs.