My neighbor Kitty telephones one afternoon and says, “let’s go see Judy.” Since we do not know anyone named Judy, I quickly figure out she is referring to the acclaimed film biography of Judy Garland, starring Renee Zellweger.

OK, I say. Where is it playing? At the Presidio? Oh, I know where that is — on Presidio at Sacramento. We meet at a Muni bus stop and get off the bus at California and Presidio. Walking up the hill, we go in, pay for our tickets, purchase caramel popcorn, and take our seats to watch the previews of coming attractions. Once the feature begins, we realize we are in the wrong movie house!

Rushing to the lobby, we explain, apologize and ask for a refund, which the clerk gives us. We thank him for his courtesy and rush outside to explore Kitty’s cell phone.  OK, she says, we are at the Vogue, and we want to be at the Presidio cinema. Where is that?

Finding another Muni bus stop, we transfer at Fillmore. What the heck — it’s a lovely autumn day and we have time before the next showing of Judy at the Presidio — which happens to be on Chestnut somewhere.

Once we reach Chestnut on the second bus, we start walking. I have not explored the Marina  in years — so many specialty shops, cafes and bars. Everyone is out on a Sunday afternoon, strolling with kids and dogs. The blocks are long, however, and we began to wonder where the theater actually is.

Eventually we spot a marquee and walk inside, happy to see an ice cream freezer right in front on such a warm day. Are you showing “Judy” we ask. No, the proprietor replies, but my sister is — just down the street a couple of blocks. Your sister? Yes, she says. This is the Marina movie house.  You want the Presidio.

Yes, of course, we reply; thank you. And out the door we go, determined that this trek will be successful. After two or three long blocks in the warm sun, we spot another marquee, and this one says “Judy.” Greatly relieved, we walk in and say just one word to the proprietor — just to be sure —  “Judy?” Yes, she smiles, and we are happy to see that her movie house stocks Three Twins ice cream mini’s. 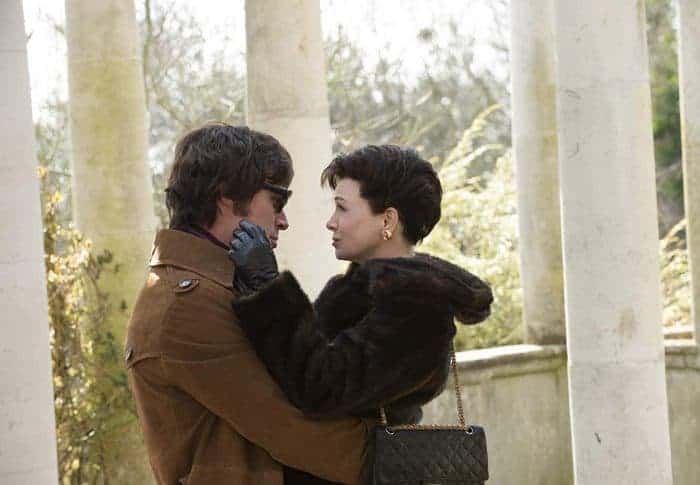 Entering the tiniest cinema I have ever seen, we sit down. There are just four of us in the audience. Judy comes on the screen, and we are transported by Renee Zellweger’s finely tuned performance as Judy Garland — actress, singer and dancer who became a child star in The Wizard of Oz (1939).

In terms of how young Judy was treated by an overly ambitious mother and ruthless studio executives, let’s just say that Hollywood monsters did not start with Harvey Weinstein.

The film focuses on the last year of her life and her final performances in London, with flashbacks to Judy’s early years with Metro-Goldwyn-Mayer. In terms of how young Judy was treated by an overly ambitious mother and ruthless studio executives, let’s just say that Hollywood monsters did not start with Harvey Weinstein. Garland died in England in 1969 from a barbiturate overdose.

Critics continue to differ over the decision to allow Zellweger to sing Garland’s songs, instead of purchasing the right to use recordings by Garland herself. While  Zellweger’s interpretation of Judy Garland is sure to garner an Oscar nomination, this film biography would have been an excellent opportunity to showcase Garland’s musical accomplishments and expose younger audiences to her voice.

We loved the film, and learned a lot about the city as we trekked from one venue to another. What better way to spend an afternoon?