Savannah is known as “The Hostess City of the South” for its genteel lifestyle and gracious hospitality. Without question, the city is a stunner with its impeccably landscaped 22 park squares, perfectly outlined by atmospheric, moss-draped oak trees, as well as a rich architectural legacy and a plethora of well-maintained, historic homes open to the public. But this ain’t just another stop on your grandmother’s senior bus trip any longer because Savannah has finally joined “The New South.”

Savannah could claim endless bragging rights for their collection of contemporary museums, unique designer shops, trendy accommodations, and some of the most inventive, chef-driven eateries in the country, but they are still way too nice for that. The continuous stream of entrepreneurial, uber-creative alums from The Savannah College of Art and Design fuels much of its recent coolness cred.

For an artsy afternoon, head to the Telfair Museums where one ticket gives you access to 3 incredible museums: the Telfair Academy, which opened in 1886 as the first public art museum in the South, the Owen-Thomas House & Slave Quarters, and the Jepson Center for the Arts, a spectacular Moshe Safdie–designed modern art museum. I only had time for a quick visit to the Jepson, but wowza, was it worth it, if only for a walk-through of Suzanne Jackson’s rainbow retrospective.

The SCAD Museum of Art, founded in 2002 as part of the Savannah College of Art and Design, has collected over 4,500 works of haute couture, drawings, painting, sculpture, photography, prints

The SCAD Museum of Art, founded in 2002 as part of the Savannah College of Art and Design, has collected over 4,500 works of haute couture, drawings, painting, sculpture, photography, prints and more. Don’t miss the boutique/gallery, shopSCAD, because this is where you can pick up some cutting edge pieces created by SCAD’s talented students and faculty.

Foodies can kill two birds with one stone by signing up for a Savannah Taste Experience Food Tour. Their walking tours combine just the right amount of history and culture with copious amounts of authentic low-country cuisine, ranging from traditional shrimp and grits to trendy pork belly donut sliders.

It’s almost mandatory to tour a historic home during your stay but for something just a wee bit different (and quite amazing) I toured the “Oldest Black Church in North America” as well as the “Third Oldest Synagogue in the U.S.”. While you can do both on your own, you’ll get so much more out of the experience by signing up for their tours.

First African Baptist Church (FABC) was organized in 1773, even before the 1776 birth of the United States of America as an independent nation. It served as an essential meeting place during the civil-right era and was a stop on the Underground Railroad. In the basement, you’ll see air holes that were drilled in the floor for slaves hiding underneath.

Congregation Mickve Israel began in 1733, shortly after the founding of the City of Savannah. It was established by 42 brave Jews who sailed here from England with little more than their beloved Torah (the oldest torah in America) and a special kit for circumcision. The historic sanctuary, built in 1876, is the only neo-Gothic synagogue in America.

Savannah loves a good festival, so be sure to check out their calendar for upcoming events.

The first is the Savannah Tour of Homes and Gardens (now in its 69th year) which allows visitors a rare glimpse inside some of Savannah’s finest private homes.

Stay on for the Savannah Music Festival – a world-class celebration of the music featuring their “Jazz Weekend” March 26-29.

No need to over-think this one since Tybee Island, a lazy, white-sand beach town, is only about a 20-minute drive.

Stop for a photo of their colonial-era lighthouse (if you’re feeling industrious you can climb to the top for a better view) and you’ve done all the necessary sightseeing.

Your mission here is to kick-back and enjoy a casual seafood pig-out at the  Original Crab Shack.  Start with one of their “shackatizers”, such as the deviled blue crab, and then go for the Capt’s Crabs Sampler, a humongous platter of assorted shellfish, corn, potatoes & sausage.

The Cotton Sail Hotel Savannah, Tapestry Collection by Hilton, holds court in a nostalgically repurposed, cotton warehouse, complete with original 200-year-old pine hardwood floors. This 56-room boutique property puts you right in the thick of things, partic when you head up to the Top Deck, Savannah’s premier rooftop bar, for an expertly crafted cocktail to go with your sunset view.

The artsy, ultra-modern, Andaz Savannah is all about providing a relaxed, contemporary, urban getaway. From the exposed brick to the “Market to Table” community dining table, to their private pool and patio, the Andaz offers a top choice for the sophisticated traveler. Don’t miss their famous candied bacon bar snack.

What a fab idea, keeping all the best parts of a 1938 Art Deco Greyhound bus station (which was formerly segregated) and turning it into a popular high-end diner. Even cooler is that it’s helmed by Mashama Bailey, an African- American chef who was awarded a James Beard Award this year as “Best chef of the Southeast”. If you don’t have rezzies, try and grab a seat at the bar for superb cocktail sippin’ with a side of Savannah Red Rice Balls. If you come for happy hour, you can sit outside for DIY shuck and grilled oysters at a table-side fire pit.

After the success of big sister, Fat Radish on Manhattan’s Lower East Side, the principals decided to open lil’ sis Fat Radish in Savannah. Their succinct philosophy of serving “simple dishes created with seasonal & locally sourced ingredients” works well here, with a heavy emphasis on veggies from neighboring small farms.

Start with a Dirty Peach, made from Mezcal, Tequila, charred peach, lemon and mint to wake up your buds. Follow with the easy to love but hard to serve, unless you have a good carver in the group, brined, whole roast chicken with warm farro salad.

Normally a cooked carrot hater, I actually devoured their baked carrots with turmeric chutney and whipped goat cheese, which just goes to show you what a creative chef can do with exquisitely fresh produce.

Another equally cool, scrumptious resto is Cha Bella, where the organic ingredients are sourced, with LOVE, from local farms and fishermen. Their menu is constantly changing but always provides “a made from scratch, Earth to Table experience.” 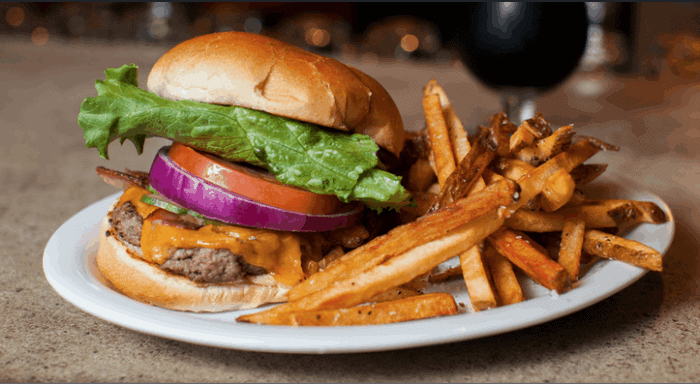 Green Truck’s burgers are the bomb!

For a fast refueling, head to the Green Truck neighborhood pub, a make-over of an old Arby’s, for their award-winning burgers and crunchy fries served with house-made ketchup, paired w/a perfectly crafted cocktail! Gluten-free buns are available.

And for the grand finale: 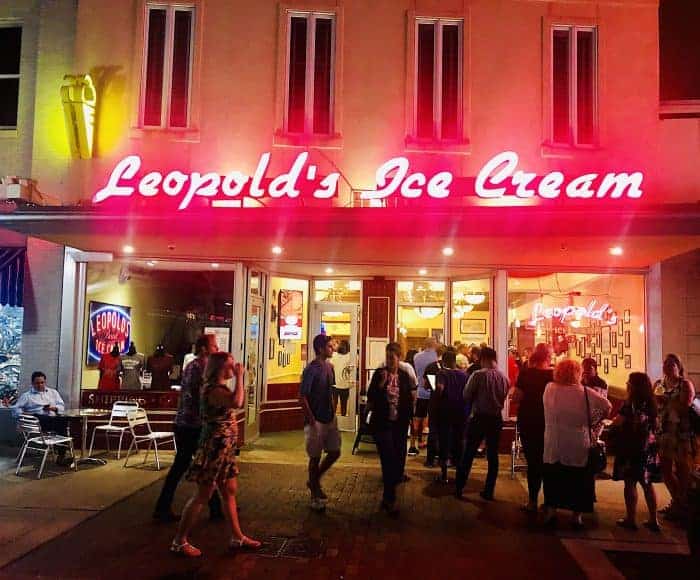 Even if you’ve had dessert, head over to Leopold’s Ice Cream for a mandated follow-up. Three brothers from Greece founded this Savannah institution in 1919 and, as you can see from their perpetual, snaking-out-the-door line, it’s still going strong 100 years later! Warning: it’s hard to choose between their inventive Tutti Frutti ice cream, stuffed with candied fruit and rum-soaked Georgia Pecans, the classic Lemon Custard, which has been a constant since they opened, and one of their seasonal flavors such as Habanero Sugar or Japanese Cherry Blossom, so best to go with a friend who shares.

Warning: it’s hard to choose between their inventive Tutti Frutti ice cream, stuffed with candied fruit and rum-soaked Georgia Pecans, the classic Lemon Custard, which has been a constant since they opened, and one of their seasonal flavors such as Habanero Sugar or Japanese Cherry Blossom, so best to go with a friend who shares.

For a humorous, outsider-turned-insider look at the city, you’ve got to read Savannah Sideways, written by the outrageously talented, Jessica Leigh Lebos, a “Southerner by marriage”. Her hilarious, Erma Bombeck-ish observations provide the ultimate sense of Savannah place. 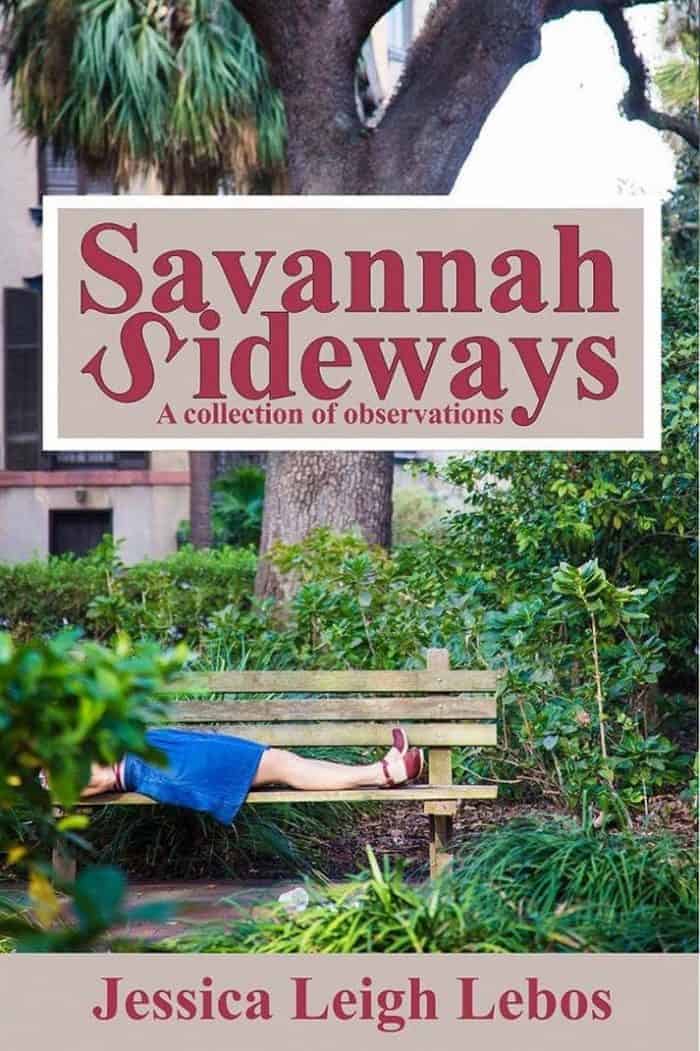