Actor Jamie Foxx is expected to attend the opening of the Mill Valley Film Festival with his new film Just Mercy. MVFF organizers say Tim Blake Nelson and Rob Morgan will also make appearances when the film screens on October 3, 2019.

At a presser this morning at the Delancey Street Screening Room in San Francisco MVFF founder and director Mark Fishkin and programming director Zoe Elton revealed the schedule for the upcoming 42nd edition of the venerable Bay Area-based film festival. See below for all the details.

This year’s festival — which is always a Stark Insider favorite — will feature 12 world premieres, 11 North America premieres and 17 U.S. premieres. No doubt, there’s plenty of new films and documentaries here for festival-goers to enjoy.

Look for restoration screenings of Thousand Pieces of Gold starring Rosalind Chao and Chris Cooper; and Philip Kaufman’s 1988 adaption of Milan Kundera’s classic novel, The Unbearable Lightness of Being. 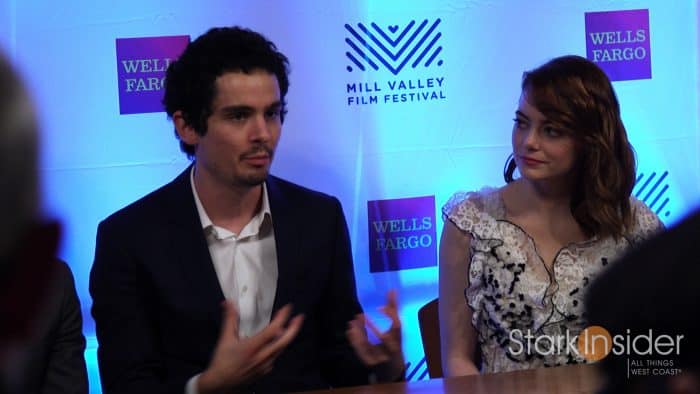 Following the screening, the Opening Night Gala will be held at Marin Country Mart in Larkspur.

WAVES
Trey Edward Shults’ (Krisha, It Comes at Night) impressive third feature centers on the complicated family dynamics of three couples whose lives and loves hang in the balance. With a fantastic score by Trent Reznor of Nine Inch Nails, Waves is an unflinching and delicately-crafted portrait of family and forgiveness.

MVFF42 will bestow a number of Spotlights throughout the Festival including: Oliva Wilde and her process of creating Booksmart; actor Robert Pattinson with the local premiere of his new film The Lighthouse; Kristen Stewart, presenting her new film Seberg wherein Stewart portrays actress Jean Seberg; and the Marriage Story ensemble, including director Noah Baumbach, actress Laura Dern, and others.

The Festival will present three Tributes this year: to Alfre Woodard with a screening of her new death row drama Clemency; to Michael Apted, presenting 63 Up, the latest edition of his long-term project documenting a group of people over their entire lives; and to Barbara Rush, and her body of work spanning decades – starring opposite leading men such as Paul Newman and James Mason, and working for directors including Douglas Sirk and Nicholas Ray.

The Festival will present another strong slate of Panels, Master Classes, and Workshops to supplement the outstanding film programming and to continue the discussion for Festival attendees. The Mind The Gap Summit will again feature an extraordinary lineup of thought leaders and creatives in film and tech for a full day intensive to help work and share ideas as the Festival advocates gender equity in film. This year’s Summit will include a film screening and award presentation for Trailblazer of the Century to National Park Ranger Betty Reid Soskin. In addition, there will be a special Mind the Gap Director’s Forum, and a presentation of this year’s Mind the Gap Award to Swedish Film Institute CEO Anna Serner on October 5. Other Behind the Screens events include the annual State of the Industry panel featuring leaders of the independent film world to talk about the current pulse of the independent film community; From Concept to Story to Screen teen filmmakers’ workshop, facilitated by Tom Franco and Iris Torres; a Networking in Nature Active Cinema Hike on the Tennessee Valley Tailhead in Mill Valley; a Master Class held by Laura Dern; a Get the Kids in the Pictures! workshop with insider tips on how to break into acting in films; and a Variety 10 Screenwriters to Watch panel, moderated by Variety’s Features Editor Malina Saval.

MVFF Music returns with a diverse series of concerts at the Sweetwater Music Hall. These nights of live music include performances by artists featured in MVFF films, as well as local, national, and international musicians. Musicians this year include Danny Evans, Essence Goldman, Hayes Carll, Ace of Cups, Gaijin à Go-Go, Alice Gerrard, and Little Hurricane.

The Festival’s ¡Viva El Cine! Initiative showcases prize-winning Spanish Language and Latin American films that seek to engage and embrace our Spanish-speaking and -loving audiences. Highlights in this section include: Marighella, The Invisible Life of Eurídice Gusmão, and Bacurau, three films from Brazil; August, from Cuba/Costa Rica; The Prince from Chile/Argentina; Pain and Glory, Pedro Almodóvar’s latest; Pablo Larraín’s Ema from Chile; and the shorts program ¡Viva los Niños!

Once again the MVFF’s Active Cinema is a forum for films that inspire people to take action to create positive change. These films are united in their commitment to explore the world and its issues, engage audiences, and transform ideas into action. Highlights this year include: The Dog Doc, exploring integrative veterinary medicine; Rewind, on generational trauma; Right to Harm, which examines the extreme effects of factory farming on rural communities; and The Story of Plastic, a deep dive into the global plastic pollution crisis.

A celebration of superb storytelling from emerging Swedish directors: fiction and nonfiction films that represent the range of contemporary cinema from the star of Scandinavia. Films include Amateurs, And Then We Danced, and Scheme Birds.

Rockin’, raucous, and revealing reflections on society and culture, captured through the wide-angle and long lenses of established and emerging international filmmakers. Highlights include Coup 53, From Wounded Knee to Standing Rock: A Reporter’s Journey, A Hidden Life, Marighella, Watch List, and You Say You Want a Revolution?

Diverse stories of queer representation found in a genre-twisting, award-winning array of films from across the globe. Highlights include And Then We Danced, Blackbird, By the Grace of God, Ema, Pain and Glory, Portrait of a Lady on Fire, Synonyms, and Where’s My Roy Cohn?

Stark Insider hopes to see you at the movies!