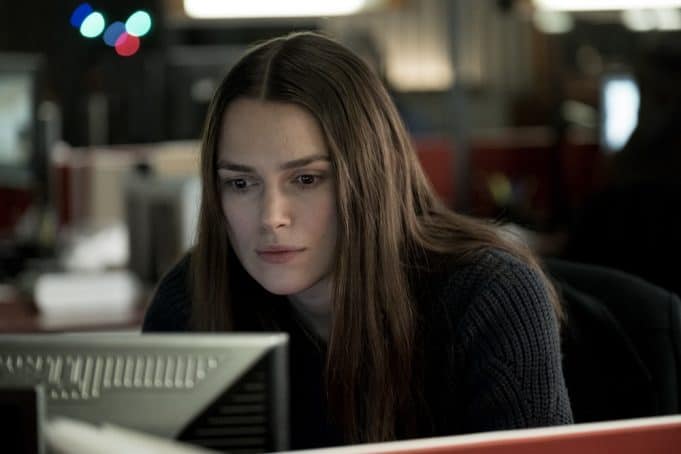 Official Secrets is nervewracking in terms of subject matter – big lies told by powerful people in high office more than ten years ago — but is a feel-good film for those who serve and protect and risk everything in order to preserve democratic values. A suspenseful and piercing portrait of the spy wars with a compelling performance by Keira Knightley.

Katharine Teresa Gun was a translator for GCHQ, British intelligence.  She was a spy. Her security clearance was at the highest level, far above the category of “top secret”.  At the SF Film Festival last spring and at the recent preview of Official Secrets in San Francisco, former CIA agent Daniel Ellsberg spoke to the viewing audience, extolling the courage it took for Gun to release a sensitive memo about a conspiracy between Prime Minister Tony Blair and President George W. Bush to spy on U.N. Security Council members in order to blackmail them into voting the way Blair and Bush wanted.

It stunned Katharine Gun at the time she discovered this duplicity during her work at GCHQ, and it still stuns to see it displayed on the screen, especially actual news reports from the period. How frustrating it was for Gun to sit in her modest home next to her husband, and see fiction portrayed on the evening news. She raged against the official lies on television news, while her husband tried to comfort her. The rest of us from time to time suspect when “the fix is in”, but she really actually knew the gory details.

Keira Knightley’s performance is central to the success of the film, and conveys vividly the soul searching and subsequent fear Gun experienced after she made her decision to release the secret memo. The document in question had a much higher security clearance than the Pentagon Papers leaked by Daniel Ellsberg to the New York Times and the Washington Post in 1971.

As Gun waited to see what action the crown prosecutor would take, whether she would be charged with violation of the Official Secrets Act, she was exposed to a year of psychological torture – initial arrest after she confessed, Scotland Yard going through her home possessions, negative publicity in the media as the controversy raged, police following her everywhere, threats to deport her Kurdish husband, the recording of her telephone conversations.

Knightley’s performance shows that Katharine Gun was in agony, but Gun never wavered about the rightness of her decision.

Police detectives said to her, you’re a spy. Who are you to decide to release a document?  Her answer – I spy to protect the British people, and not to help politicians tell lies which will endanger the British people.

When a British newspaper (the Observer) published the memo in question, the ugly scheme was exposed for all to see, and so the Security Council never gave a final vote to support an invasion of Iraq. England and the U.S. went into Iraq anyway.  No weapons of mass destruction were found.  Several thousand British and American soldiers died, along with many thousands of Iraqi civilians.

What was significant about Katharine Gun’s action is that she risked everything in the moment to stop a war. This is why her decision received such high praise from Daniel Ellsberg. He released classified papers more than a decade after a war had begun. Gun released a much more sensitive document right away, in an effort to stop a war from beginning.

A fascinating glimpse into British intelligence, as well as the ingenuity attorneys must display in order to defend a spy, when they are not allowed to discuss the contents of the document in play, because of its high classification level. Journalists scrambled to confirm their story by tracking down experts and supporting witnesses, phone call after phone call, trip after trip to other cities and other countries. We see that the gamble had high stakes for all sides.

Excellent performances by Ralph Fiennes as barrister Ben Emmerson, Katharine’s attorney, and Matt Smith as reporter Martin Bright who convinced his editor to run the story, knowing the Observer risked being found guilty of violating the Official Secrets Act. Peter Guinness is chilling as one of Scotland Yard’s police officers confronting Katharine in her home.

Gregory Bernstein, Sara Bernstein and Gavin Hood wrote the suspenseful screenplay. Marcia Mitchell and Thomas Mitchell wrote the book on which the screenplay is based: “The Spy Who Tried to Stop A War.”