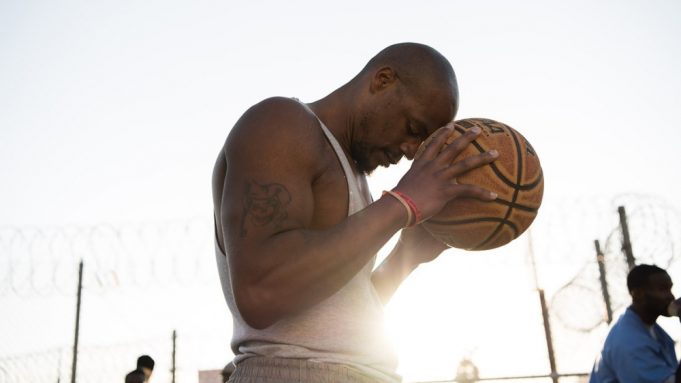 Closing night at the 2019 San Francisco Film Festival featured Q Ball, a powerful documentary about basketball with Kevin Durant as an executive producer. This was the premiere showing for the film. A Fox Sports Film release, Q Ball has multiple producers and executive producers.

In this film director and writer Michael Tolajian takes a close look at San Quentin’s basketball team, showing us how organized sports may create strong possibilities for building positive community and bringing about rehabilitation.

At a press conference afterward, documentary producers expressed gratitude to the Golden State Warriors, to Kevin Durant and to the CA Department of Corrections as well as the volunteer teams who come to San Quentin to play.

Prisons are complex places and crimes are emotionally charged subjects to portray. Through skillful and measured mixing of interviews with prisoners and the Department of Corrections informational officer, Tolajian provides a sense of their world. One minute we see convicts relaxed in the prison yard on a sunny day talking and playing chess; the next minute there is a man down in the yard and guards have to break up a fight. The unexpected is a part of a prisoner’s daily world.

Decades ago San Quentin began as a maximum security prison with medieval practices, says Lt. Sam Robinson, correctional officer. Today rehabilitative services exist and there is access to the outside world. Basketball is the flagship sport now, and the prison has some amazing players. Through basketball the prisoners learn about themselves and their potential. To train and to play require self-knowledge, focus, intention and talent. Not everyone has what it takes to make the team.

The director interviews four prisoners, including team coach Rafael Cuevas, who is serving 16 years to life. Cuevas describes their basketball as a faith-based program. As part of the healing process and the interview process, inmates must talk about their crimes. Through spiritual practices and team building, inmates come to grips with the reality of what they did and begin to understand what it takes for them to grow and heal. The journey is longer for some than others. Said one inmate, “I saw my first murder when I was 11.”

Because of his time in prison, Smith says, “My daughter doesn’t know who I am.”

The San Quentin inmates have a great love for the Golden State Warriors. Their excitement came through clearly when they had a chance to play some of the GSW executives and coaches. One of the inmates is invited to try out for the GSW when he is released. At age 31, Harry Smith has a small window for NBA eligibility. Because of his time in prison, Smith says, “My daughter doesn’t know who I am.”

When Smith is released from San Quentin, one of the prisoners says, “Forget this place.” However, another prisoner says to Smith, “Never forget this place.” And true to their word, The Golden State Warriors schedule him for a tryout.

An absorbing documentary, Q Ball reminds us that rehabilitation is possible and even essential, since most of these inmates will be released into society. On this point, both inmates and correctional officer Lt. Sam Robinson are in agreement. Well worth seeing.