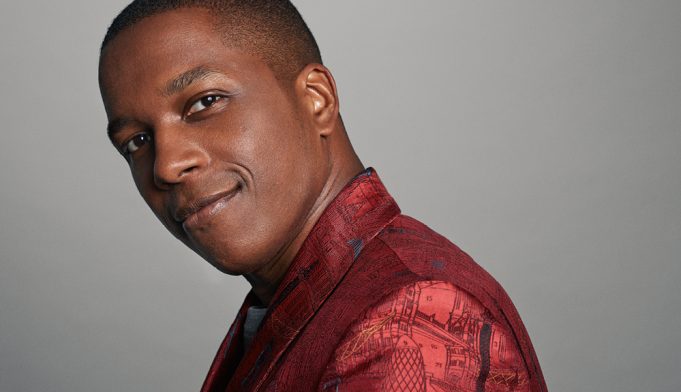 While Lin Manuel Miranda’s Hamilton musical continues to light up the stage at a SHN theater, one of its original stars lit up the stage at the San Francisco Symphony during the weekend just past.

Leslie Odom, Jr., best known to many Hamilton fans as vice president Aaron Burr, is on a national tour to showcase his many talents as a performer. And he has been a performer since the age of 16 when he auditioned successfully for a role in the musical Rent.

Joined by his multifaceted group of regulars, known as “the band,” he graced the symphony stage Saturday and Sunday to the delight of an audience of Hamilton fans. Odom sang with the full symphony orchestra behind him, as well as featuring an extended set with his marvelous band: Michael Mitchell on piano, Senfu Stoney on bongos, Orlando le Fleming on bass, John Davis on drums, and Steven Walker on guitar. Solo performances by each band member were exhilarating.

Seemingly shy at first, Odom relaxed under a warm welcome from the audience. He joked that he knew people were waiting for their favorite Hamilton song, so he was going to scatter those numbers throughout the program, so everyone did not get up and leave at the same time.

Odom was in fine form. We heard “Wait for It” from Hamilton before he launched into a tribute to Nat King Cole, one of his musical heroes — “Mona Lisa”, “Straighten Up and Fly Right”, “Unforgettable” and also “Autumn Leaves”. A delightful moment happened when he recalled the talents of the legendary Cab Calloway singing “Minnie the Moocher” in a Betty Boop cartoon. Odom encouraged audience participation as he sang and the crowd was happy to oblige:

After bringing a trombonist to the stage to accompany him, Odom sang a song from a 1944 documentary, Jammin’ the Blues — a Warner Brothers short film of a moment when several prominent jazz musicians got together for a jam session. The song he chose was “On the Sunny Side of the Street”.

Odom’s opening numbers were amplified too heavily, so hearing the lyrics was challenging at first. He did say that the flight to San Francisco was full of drama — a two hour delay plus issues getting from the airport — so rehearsal time was limited. However, the symphony was more than ready for such a moment, and he had high praise for their musical ability and for his conductor, Damon Gupton.

Gupton is a native of Detroit and received his B.A. from the University of Michigan. In addition to his extensive training and experience as a conductor, Gupton is an actor with Julliard training and acting credits from television, Broadway and repertory theater.

Leslie Odom commented that his career in musical theater has been helped along by a certain cultural phenomenon, eliciting chuckles from the audience of Hamilton fans. And he expressed deep satisfaction with the fact that his two favorite entertainment phenomena – Hamilton and The Voice – reach across age and racial divides. He clearly delighted in noticing that the symphony audience was composed of three generations and multiple cultural groups.

Leslie Odom commented that his career in musical theater has been helped along by a certain cultural phenomenon, eliciting chuckles from the audience of Hamilton fans

The second half of the program featured “Sarah”, a moving song from the 1999 Broadway musical, Civil War. In addition to performing a song from the 2006 Broadway musical, Spring Awakening, he delighted the audience by bringing his lovely wife Nicolette Robinson to the stage to accompany him on “What Are We Waiting For”, from Hamilton.

After a breathtaking acapella version of Bob Dylan’s “Forever Young”, Odom ended the most enjoyable evening with “Dear Theodosia” from Hamilton.

Summer with the SF Symphony always includes a mix of contemporary artists and traditional European classics. Last Friday featured Sarah Hicks conducting a musical celebration of the 50th anniversary of landing on the moon. Compositions by Debussy, Ravel, Strauss, and John Williams were in that program. Earlier in July the SF Symphony headed south to Stanford University’s Frost Amphitheater. The symphony has been performing at Stanford since 1913.

This 2019-2020 season marks the 25th and final season of Michael Tilson Thomas (MTT) as Music Director. Anchoring the season are many of the masterworks that have been instrumental in establishing the SF Symphony’s international artistic reputation under MTT’s leadership – including Mahler’s Symphony No. 8; Beethoven’s 250th birthday celebration; and Wagner’s The Flying Dutchman.

Music Director Thomas has said, “This season is very much about celebrating the relationships we have built together.”