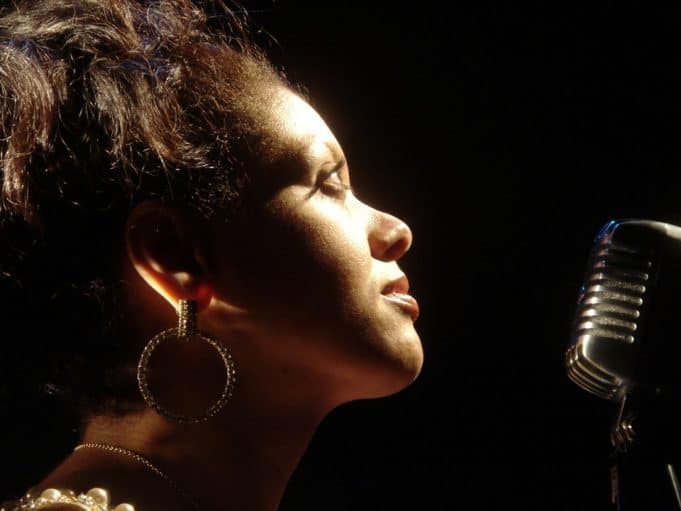 5 out of 5 stars - 'Outstanding - Starkie!'
Feinstein’s at the Nikko, San Francisco
Review by Jeanne Powell

This month the amazing Kim Nalley performed her Christmas show in Feinstein’s at the Nikko, and filled the intimate club with musical joy.

Feinstein’s nightclub is located in the Nikko Hotel, just off historic Union Square in San Francisco. Founder and cabaret singer Michael Feinstein is an interpreter of the repertoire known as the Great American Songbook. He opened his first nightclub at Loews Regency in New York in 1999, and opened a club at the Nikko on the other side of the country in 2013. He also operates Feinstein’s/54 Below in Manhattan, which opened in 2015.

Singer Kim Nalley is one of San Francisco’s most talented artists, and is a favorite performer at the Nikko

Singer Kim Nalley is one of San Francisco’s most talented artists, and is a favorite performer at the Nikko. An internationally acclaimed jazz and blues vocalist, Nalley is known for her 3-1/2 octave range and her joy-filled performances on stages across the country and around the world.

The first half of her concert was filled with the inspirational moments which only gospel music can provide. Local churches were represented in the house, and she called on audience members, both professional and amateur, to sing with her on the small stage.

Nalley’s young daughter joined her for a charming version of “Jingle Bells.” Then Nalley announced “now it’s time for blues,” and guitarist Pat Wilder accompanied her on “Merry Christmas Baby” and “Santa Baby” (popularized by Eartha Kitt). “Come and trim my tree with lots of decorations from Tiffany’s.”

Nalley continued to mix the spiritual and the seasonal with grace and ease. Her “Santa Clause is Coming to Town” was wonderfully rollicking – with a nod to Duke Ellington – and her musicians were all smiles on this one: Tammy Hall on piano, Michael Zissman on electric bass and Kent Bryson on drums.

“Oh Holy Night” was stately and measured, with multiple octaves reached effortlessly, as the singer moved from gospel to jazz and back.

“Walking in a Winter Wonderland” was her encore, lilting and gently uplifting, with pianist Tammy Hall evoking the falling of snow with her interpretation.

A true Renaissance woman, Kim Nalley has been a featured writer for JazzWest and the SF Chronicle, and is a Ph.D. candidate in history at UC Berkeley.

After the concert Nalley greeted fans warmly, accompanied by her daughter, and spent considerable time in the hotel lobby autographing CDs and posing for photographs. Brightly colored posters were available to audience members.

A true Renaissance woman, Kim Nalley has been a featured writer for JazzWest and the SF Chronicle, and is a Ph.D. candidate in history at UC Berkeley. Her philanthropic endeavors include funding the Kim Nalley Black Youth Jazz Scholarship. Somehow she finds time to be a wife and a mother of three.

Visit kimnalley.com for her upcoming performances. This was a vibrant evening for audience members and performers alike.