Matthew Heineman directs Rosamund Pike in his first narrative venture, a film biography highlighting the last few years of war correspondent Marie Colvin (1956 – 2012). And he seems to get it right.

Heineman has been called “one of the most talented and exciting documentary filmmakers working today” (Sundance Film Festival). Indiewire referred to Heineman as a”respected and gifted filmmaker who combines gonzo fearlessness with empathetic sensitivity.” He is known for such documentaries as The Trade, City of Ghosts, and Cartel Land. It’s no surprise that he would find Marie Colvin’s story fascinating.

Marie Brenner wrote the 2012 Vanity Fair article on which this film is based. Arash Amel wrote the screenplay and co-produced the film. Actor Charlize Theron is one of the film’s producers.

Marie Brenner had great access to Colvin in February 2012, before Colvin’s last trip to the war zone in Hom, Syria. Brenner describes vividly this larger than life journalist with swashbuckling ways, who focused on the trauma of civilians in war zones, and who was equally fearless in questioning those in power whose political decisions often led to civilian trauma, from Yasser Arafat in occupied Palestine to a leader of the Tamil Tigers in Sri Lanka to Muammar Gaddafi in Libya. Colvin wore a string of pearls given to her by Arafat; she accompanied him and Yitzhak Rabin to the White House. After she questioned Gaddafi fiercely on camera, Gaddafi said he liked her even better than Condi Rice, even as he squirmed and dodged her queries. Colvin lost an eye while in Sri Lanka.

Rosamund Pike focuses on capturing the “American whiskey tone” in Colvin’s voice and her “cascade of laughter” at inopportune moments, as she dives under Colvin’s skin. Colvin wore La Perla lingerie in defiance of the chaos and blood, and carried her lucky copy of Martha Gellhorn’s The Face of War. Pike’s performance captures the sheer raw energy of this “American girl in the small, clubby world of British journalism,” who had a talent for “giving voice to the voiceless,” as reported by Brennan in Vanity Fair. When accepting an award for her work in Sri Lanka, Marie Colvin said “Bravery is not being afraid to be afraid.” 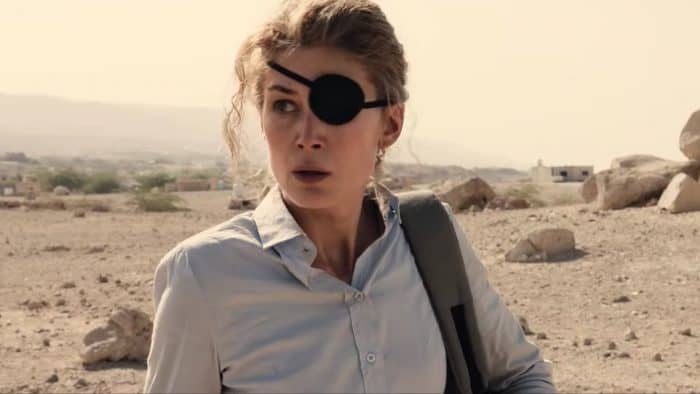 With her own sense of adventure and proven ability to embrace the character she is portraying, Pike gives us a richly textured war correspondent who placed no boundaries on her friendships – from guerrilla fighters to movie stars – and who included chain-smoking and heavy drinking among her survival techniques as years of front-line coverage took its toll on colleagues and her former husband. Some died in covering combat, or left the wars for less stressful occupations.

Colvin was “the silver girl [who] sails off into the night,” in an article in The Sunday Times, as she relaxed in a bikini on someone’s sailboat.

There were parties, dinners with friends, and moments with admiring lovers to keep the nightmares and PTSD symptoms at bay when she wasn’t in East Timor or Chechnya or Iraq. Colvin was “the silver girl [who] sails off into the night,” in an article in The Sunday Times, as she relaxed in a bikini on someone’s sailboat.

Colvin formed a good friendship with young photographer Paul Conroy (Jamie Dornan), which began when she persuaded him to ignore the orders of an American commander in the Green Zone, as they raced to get to the Lebanese camps where Palestinian civilians were under brutal siege by a Shiite militia backed by Syria. Basically she taught him, “this is how we do it.” Break the rules, risk your life, get the story, and get it to your editor.

Marie Colvin’s inspiration came from war correspondent Gloria Emerson, who covered the American war in Vietnam and political philosopher Hannah Arendt, who covered the Eichmann war crimes trial in Jerusalem. And her mother, Rosemarie Colvin, who said “You only cry when you bleed.”