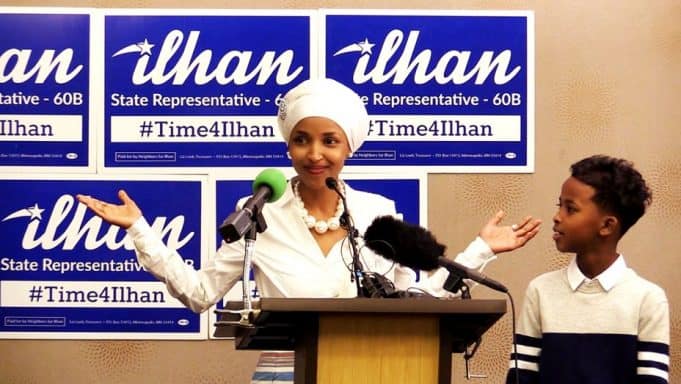 Of the many fine documentaries featured in the 2018 Mill Valley Film Festival, Time for Ilhan stands out for its sheer excitement and joy as we watch an essentially shy refugee embark on an amazing journey from wife and mother to an elected official in the city of Minneapolis.

Ilhan Omar is a Somali Muslim who survived four years in a refugee camp as her country descended into civil war. Grateful to have her family intact, she applies for asylum in the U.S. and they settle in Minneapolis with 70,000 other Somalis.

Director Norah Shapiro captures a moment in a nationwide awakening when women start to understand that if they want substantive change, they have to do it themselves by running for public office on every level. The question is how to get to those women who never think of running for election.

Ilhan accepts this challenge with the approval of her widowed father and her husband. In fact, her husband takes a leave of absence from his work so he can assist with the three children as she runs for office.

Shapiro’s camera follows Ilhan from her modest home to local political caucuses and door to door canvassing. She is on the phone to local voters and politicians, working with a team of students from the University of Minnesota. The diminutive candidate, in colorful hijab and head scarf, drives from caucus to caucus in preparation for making her case at the Minnesota state convention. Her political issues include income disparity, criminal justice reform, and the crushing loan debt experienced by college students. Her young team makes good use of social media. She does radio and television interviews. And she receives key endorsements.

The challenge? Her female opponent has been in office 43 years. How is a newcomer going to unseat her? And what about the male Somali Muslim running in the primary? Will he siphon votes from Ilhan?

The Minnesota state convention for the Democratic Farm Labor party is intense. No candidate has a majority, so voting goes to a second, third, fourth and fifth ballot. Team members for all three candidates canvass and cajole, to no avail. The male candidate will not release his supporters to Ilhan, even though she has many more votes than he has. And so the convention closes without an endorsement.

Undeterred, the candidate divides her time between her family and the campaign. While her husband is at home with the children, her father campaigns with her in the evenings as they knock on doors and meet with potential supporters. Ilhan campaigns not only for herself but also for Hillary Rodham Clinton. Congressman Keith Ellison is solidly in her corner as tension mounts.

There is a scandal brought about by an anonymous complaint. Ilhan weathers it, although she bans the cameras from her life for a week or two until things are sorted out. Her children have questions about why she is away from home so much. The oldest child explains to the youngest one that Mommy is running for office.

One of her finest moments is on Comedy Central where she is interviewed by Trevor Noah. He asks her about her invitation to President Trump to dine with her family. Radiant in her generosity and her forgiveness, Ilhan says it is their custom to ask an enemy to dine with them and try to work out differences. She says: Our democracy is messy but we must do the work to clean it up.

It is about the village, building it, believing in it, sustaining it.

During an interview after the documentary was shown, director Norah Shapiro said this story needed to be told and so she and cinematographer Chris Newberry began filming before funding was lined up. Otherwise the opportunity would have been lost. This film is being shown at middle schools, high schools and colleges. Shapiro spoke of the financial struggle to get documentary films into the communities.

What is the point and purpose of this intimate and riveting film? It is about women, about participatory democracy, about getting involved, about voters turning out to make a difference and to make their voices heard for responsible change. It is about the village, building it, believing in it, sustaining it.

As one watches Ilhan Omar navigate multilayered prejudice with grace and grit, one comes away with absolute joy for her success against the odds.