The world of Lynn Nottage’s Sweat (American Conservatory Theater, San Francisco) is unfamiliar to many coastal theater-goers (certainly to me). It’s a steel town where factory jobs are passed down through the generations. Most people go straight from the factory to the line, where hard work is rewarded with good pay and handsome benefits. Everyone knows everyone else. This insularity reinforces prejudices, and the town’s dependence on the steel industry leads to crises that bring out those prejudices in ugly ways.

Sweat doesn’t let the audience dismiss its characters because they are crass, or racist, or criminal. In one scene, between hurling hateful words at Oscar (Jed Parsario), Tracey (Lise Bruneau) delivers a wistful monologue about her grandfather’s woodworking that leaves her in tears. We see Jason covered in skinhead tattoos, but we also see him celebrating his black best friend Chris. Sweat refuses simple moral categories and forces us to feel its characters’ relationships. Those relationships are also why it is such a painful play to watch. The people in Sweat love each other fiercely. As mills close and tensions rise, their bonds break. 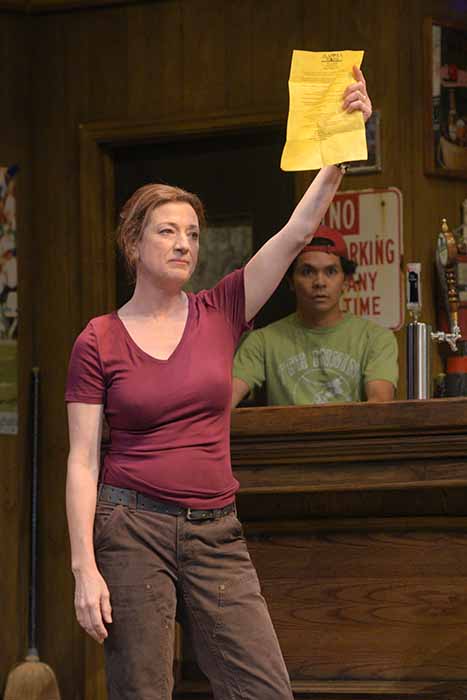 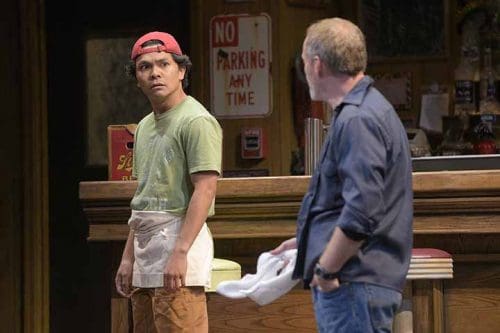 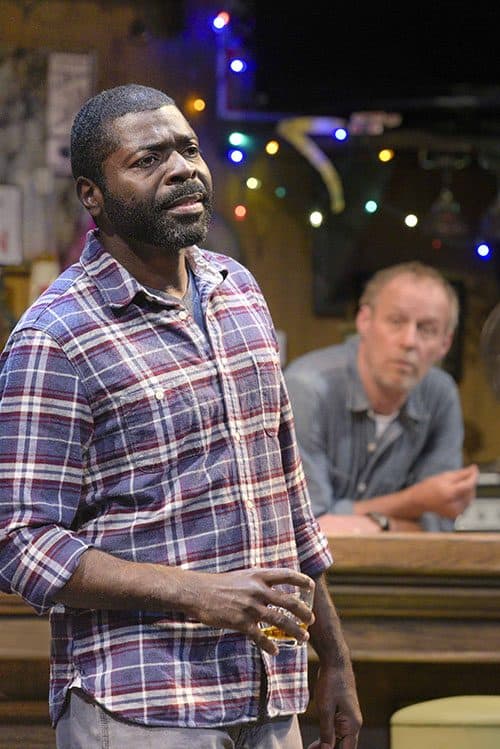 That hurts, because the audience is rooting for those friendships. Tracey brings energy and fire to every interaction. Her friend Cynthia (Tonye Patano) wins us over with her no-nonsense attitude and gentle longing for the people she has lost. The drunken Jessie (Sarah Nina Hayon) tries too obviously to keep her balance and her head. Tracey’s son Jason (David Darrow) is a fun-loving teenager who just wants his job, friends, and motorbike to remain unchanged, while Cynthia’s son Chris (Kadeem Ali Harris) reveals soft-spoken thoughtfulness and college ambitions. The bartender Stan (Rod Gnapp) wants to see every side of the situation and make everyone understand each other – which makes the growing rifts between people particularly hard for him.

Director Loretto Greco and her team conjure up a detailed world on the A.C.T. stage. Most of the action happens in the town bar, and Andrew Boyce’s set is perfect down to the stickers on the benches and the tinsel on the trophy heads’ antlers. A messy fight scene at the play’s climax is suitably chaotic: it’s hard to follow what’s going on, but the results are devastatingly clear.

There is no magic wand to wave and “save” Sweat’s characters, no political intervention than can overcome harsh economic realities.

There is no magic wand to wave and “save” Sweat’s characters, no political intervention than can overcome harsh economic realities. Stan comments, “I’m not voting. ’cause whatever lever I pull, it’ll lead to disappointment.” There’s a sense of inevitability about the central tragedy.

There’s also, strangely, a sense of hope. The play offers just a glimpse of the future, but it glimmers with promise. Families and friendships can be rebuilt, new jobs can be found, and peace can follow guilt.