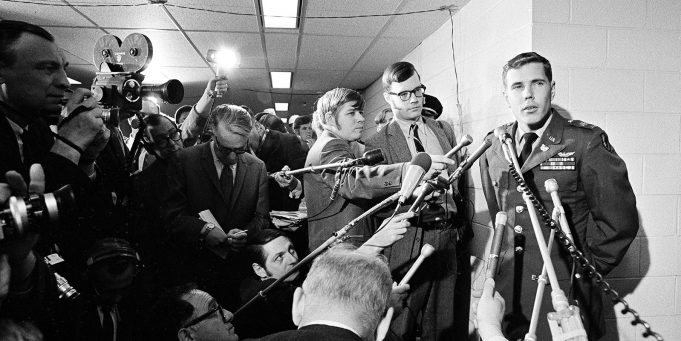 The Whistleblower of My Lai

Jeanne Powell reviews The Whistleblower of My Lai, an outstanding documentary from the 2018 Mill Valley Film Festival.

Connie Field is the director of this remarkable fusion of opera and documentary about the massacre of 500 Vietnamese civilians by American troops in 1968, and the courage of one young helicopter pilot in an effort to stop the slaughter and rescue as many of he could.

The opera was created by composer Jonathan Berger and librettist Harriet Chessman, and performed by the Kronos Quartet with tenor Rinde Eckert and master Vietnamese musician Van –Anh Vo. It was written to honor the 50th anniversary of the massacre, and the story is centered on Hugh Thompson, a young Army helicopter pilot, portrayed by Rinde Eckert.

Thompson and his two-man crew flew over the village of My Lai, in support of troops who were searching for NLF fighters in 1968. What Thompson saw on the ground told him something was very wrong. He radioed for information, but received evasive answers, and so landed his small reconnaissance helicopter in a kind of hell. According to an interview Thompson gave to Jon Weiner in 2000, which appeared in the LA Times in March 2008, the bodies on the ground “…were not combatants. They were old women, old men, children, kids, babies.”

With his crew chief Glenn Andreotta and his gunner Lawrence Colburn providing cover, Thompson set down the helicopter between civilians and advancing American troops. He said to his fellow Americans, if you open fire on the civilians, my crew and I will open fire on you. All held their fire. Calling in a medivac helicopter, Thompson waited while the medivac loaded 12 civilians, all it could hold, and became airborne.

Three times Thompson landed and took off.  On the third landing, he saw movement in the long ditch filled with civilian bodies. Crew chief Glenn Andreotta pushed through the fresh corpses and pulled out a small boy alive and unharmed.  The recon helicopter took off one last time, carrying this child.

Seymour Hersh is the journalist credited with breaking the story nationwide. Photos of the My Lai massacre were taken by combat photographer Ron Haeberle, who was embedded with American troops. Haeberle said “the carnage was unbelievable.”

Hugh Thompson was shunned after he told of what happened in 1968. He was vilified and threatened with court martial for telling the truth. Today the story of My Lai and Hugh Thompson’s response is taught at the West Point Military Academy.

Composer Jonathan Berger seeks to capture both the best and the worst of humanity through an examination of this searing incident and its impact on the life of Hugh Thompson. Each moment from his memory is framed by the pilot’s present-day reminiscences blending into the events of March 1968. In compelling segments the documentary about the opera tells of Berger’s difficulty in digesting this horrendous occurrence in American military history, and the challenge of putting the music on paper and then bringing it to life. We see the opera being written, being rehearsed as they break new musical ground, and then share the moment when all seems to come together, interspersed with photographic images from My Lai. Then the performance – absolutely stunning.

When the Kronos Quartet learned of this project, founding member David Harrington knew they wanted to be part of it. Other Quartet members were Hank Dutt, John Sherba and Sunny Yang. Musician Van-Anh Vanessa Vo is a master of traditional Vietnamese instruments, and her contribution was deemed essential. She was born in 1975, the year that the American war in Vietnam came to an end, and learned of the My Lai massacre as a child in Hanoi. In the opera she uses instruments made out of old artillery shells, which she describes as a memorial to the civilians who were massacred as well as to Hugh Thompson, Glenn Andreotta and Lawrence Colburn.

For librettist Harriet Scott, this was a difficult assignment. She recalled that her mother sang to her throughout her childhood – hymns, spirituals and folk songs. And her mother gave Scott an appreciation for opera through listening to the Metropolitan Opera live on Saturday afternoons. When she thought she was at a loss as to how to begin writing the libretto for this tragedy, Jonathan Berger said “Don’t read anything!  Just write some words and ideas as they come to you.” And with this advice he “opened the gate to a whole landscape of musicality and story I could inhabit,“ she said in a 2017 article.

Jonathan Berger says this opera is about a frame of mind – about what happens when power is exercised without wisdom.

After the documentary was shown, the composer and the director were interviewed onstage. Jonathan Berger says this opera is about a frame of mind – about what happens when power is exercised without wisdom. By the time the opera was finished, Hugh Thompson was dead of cancer, always believing he had not done enough. Andreotta died in combat a few weeks after My Lai. Berger somehow found Larry Colburn and together they went to Maya Lin’s Vietnam memorial in Washington D.C. Colburn and Berger bonded over the lyrics of Bob Dylan, and Colburn agreed to attend a performance of the opera.

A CD featuring the Kronos Quartet should be released soon. The documentary itself was an official selection in the Vancouver International Film Festival, the Raindance Film Festival, and the Mill Valley Film Festival. Music critic Joshua Kosman has said the opera “has a richly evocative score by Berger which alternates between bursts of dense, frenzied activity and slow, hymn-like harmonies of aching sweetness.” The music underscores the drama. “The combined effect is hauntingly beautiful.”

“Let there be justice done” was sought by Hugh Thompson and his crew. To save one life is to save the world, from the Talmud, is spoken by Jonathan Berger, and was his inspiration for this opera.