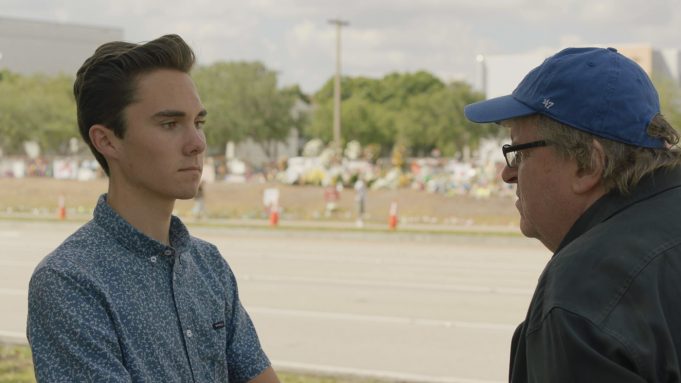 Michael Francis Moore is a documentary filmmaker and activist, best known for his work on globalization and capitalism.He also is known as a satirist, comedian and television personality. A former print journalist, he came to national acclaim with his debut film, Roger & Me (1989), and won an Academy Award for his film, Bowling for Columbine (2002).

Fahrenheit 11/9 is his latest, and it opens with a thought-provoking “accusation” which is sure to grab your attention:  Gwen Stefani is responsible for the outcome of the 2016 election. There is a backstory to this, but I will let the reader enjoy getting that perspective from the documentary itself.

After highlighting the end of both campaigns in 2016 with droll wit, as in “what the —- happened,” Moore goes on to give us the details. Neither candidates nor political operatives come out of that historical moment unscathed, but the film is fascinating, with an irresistible mix of reporting, humor, satire, indignation and poignancy.

We are reminded that the male-dominated national media was addicted to the GOP candidate’s unorthodox behavior, giving him millions of dollars of free publicity, and Trump learned early how to exploit the attention. We see the hostility directed toward Clinton when she is questioned by major media commentators. Then Moore stuns us by pointing out how many of those pundits now are off the air due to multiple accusations of sexual assault and/or harassment, from PBS to Fox to CBS.

And let’s not forget the electoral college provision in the U.S. Constitution, said to be a sop to slaveholding states back in the day; a few brickbats are hurled in that direction as well.

We also see Moore as a rising television personality, kibitzing with a younger Donald Trump on a show hosted by Rosanne Barr. Her people plead with Moore to “go easy” on Trump so he won’t walk off Rosanne’s show before it starts, and Moore goes along. He tells this story on himself.

Moore was born in Flint, Michigan, so the water crisis facing Flint residents since 2014 hits home for him. He visits the city and talks with stonewalling officials, with medical personnel who “blew the whistle,” and with ordinary working-class citizens. The parallels he builds between the 45th president of the U.S. and governor Rick Snyder have chilling implications for the concept of participatory democracy. And it is the danger to participatory democracy which weighs on the filmmaker as he explores 21st century America in this important documentary.

He goes to Trump Towers with handcuffs and says he is there to make a citizen’s arrest of the President.

Who is the real America? Where is the real America? And is that real America in danger? Two profiles stand out — both are military veterans from our recent wars in the Middle East. One is a woman of color who resides in Flint and fights for the right to clean water. The other is a majority male from West Virginia who is furious about the poverty in his state and is running for office.

Moore does what he can as an indignant American, right? He goes to Trump Towers with handcuffs and says he is there to make a citizen’s arrest of the President. And in Michigan he takes a truck full of water from the filthy Flint River and sprays it on the governor’s mansion. On some level this does bring comfort.

A quote from Moore: “No terrorist organization has figured out how to poison an entire city.” But Michigan governor Rick Snyder did that, to Moore’s home town. 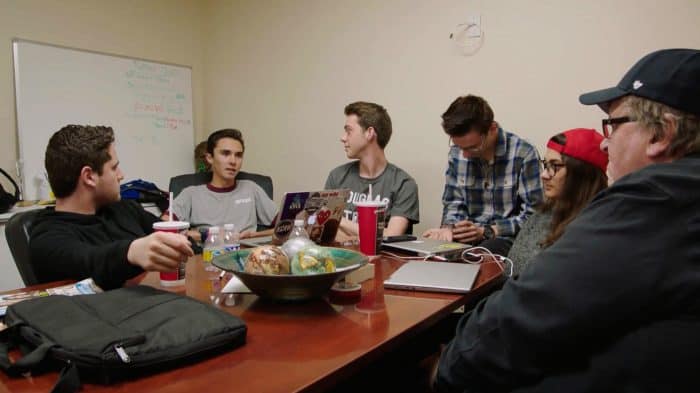 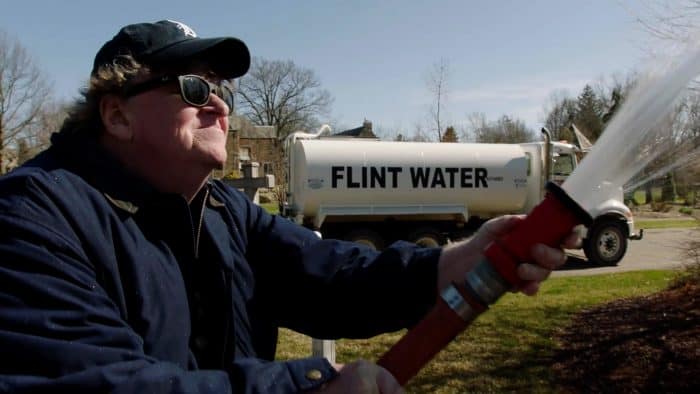 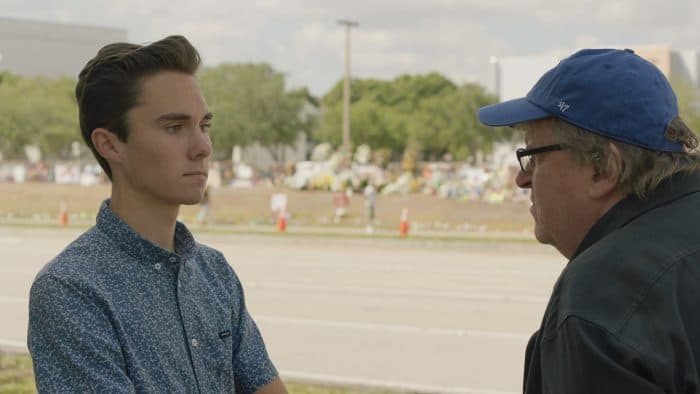 As examples of participatory democracy and democratic socialism, Moore includes powerful footage of strikes by underpaid public school teachers across the nation, and the touching courage of activist teens whose high school campuses were shot up by men with assault rifles.

Michael Moore fears the consequences of a loss of faith in our country, and says it could be the death knell of democracy. Democracy in America is an aspiration at the moment. Evil is a slow-moving mechanism, he says. And he quotes Susan Sontag: We are one 9-11 away from losing our democracy.

We are one 9-11 away from losing our democracy.

It is the children who will save us, he implies. And we are touched beyond words as the teens recount their losses from gun violence and demand answers from the politicians in their state capitals and in Washington D.C.

As the credits roll at the end of this riveting documentary, we hear the lyrics of Bob Dylan:

Oh my name it is nothin’
My age it means less
The country I come from
Is called the Midwest
I’s taught and brought up there
The laws to abide
And that the land that I live in
Has God on its side.

Do see this documentary with family, friends, colleagues and students. The director hopes you will be reminded that democracy takes work, so much more work that watching a partisan pundit preach intolerance or waving a flag in someone’s face. Find out what we all have in common and work to protect those irreplaceable values, regardless of political affiliation. Lives may depend on it.