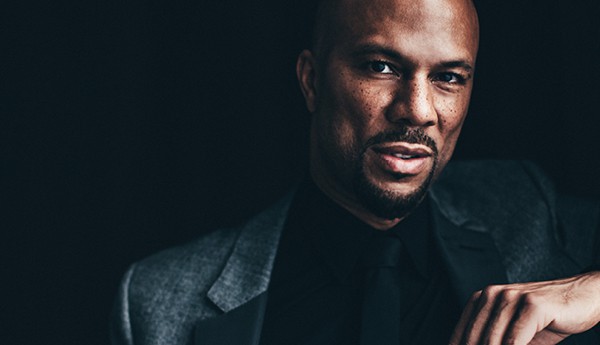 Common with the San Francisco Symphony

The San Francisco Symphony will launch its bold new 2018-2019 season with an opening night gala on September 5th, featuring violinist Itzhak Perlman. Proceeds from that gala will benefit the Symphony’s many artistic, education and community programs. The first week of September also will include the “All San Francisco Concerts,” two evenings of performances for the City’s social service and neighborhood organizations, as a tribute to their employees and their invaluable work.

In the meantime, the “Summer with the Symphony” concerts culminated with the appearance of musician and activist Common in concert with the Symphony. His one-night-only appearance sold out and brought in an audience from every age group and cultural background. The buzz was genuine and their enthusiasm lit up the concert hall as Symphony conductor Steven Reineke, two backup singers and then Common himself came onstage.

Common is an award-winning actor, film producer and poet. He has won an Oscar, Golden Globe, Emmy and Grammy (or two). You may recall how he and John Legend brought the audience to its feet at the Academy Awards when they stood and performed the theme song from the film “Selma.” He brought that same quiet electricity to the Symphony concert hall as he sang and “talked story” from his latest album, “Black America Again,” in addition to performing some of his memorable hits.

Starting with his breakthrough 1992 album, “Can I Borrow a Dollar?,” Common quickly became an influential figure in popular culture. He has become iconic in the sense of being highly original, influential and unique. His musical influences include blues, jazz and gospel. Common’s eloquent rhyming lyrics along with driving movements onstage and overall attitude as he invites the audience to hear, understand and respond to his call for social conscience and social causes – captivated his audience.

Starting with his breakthrough 1992 album, “Can I Borrow a Dollar?,” Common quickly became an influential figure in popular culture.

Dressed in white trousers, white shoes and red jacket, Common stalked the stage as he greeted the audience and expressed his gratitude to the City and to the Symphony. He recalled his origins on the south side of Chicago, where he started composing and singing to stylized rhythmic accompaniment. Throughout the evening, he brought his audience back to the central theme of his work, his purpose, his life:

“On this journey we want to see everybody achieve.”
“If your people are not doing well, then you are not where you want to be.”
“We have the opportunity now to create a better future, for our children’s future.”
“We are all survivors, no religion or race can ever describe us.”
“No matter what your nationality, as long as you stand for the people, I’m with you.”
“We can write a new story for America, and not allow injustice to go on.”

Just before intermission he won the hearts of women in the concert hall when he spoke of enjoying a California Pinot or Malbec in the company of a fascinating woman, and asked if anyone in the audience would like to join him. A couple of hundred female hands shot into the air, and he chose a woman wearing a long red dress. Naturally she took her cell phone with her as security helped her onto the stage. They sat on bar stools while he poured two glasses of red wine (vintage not specified). That powerful energetic voice became smoother than silk as he sang a love song with quiet jazz accompaniment. Naturally she took a selfie. Naturally the audience went wild as he planted a kiss on her cheek.

After intermission, Common alternated between improvisational jazz and his singular rhythmic and rhyming style. “I’m an optimist. I see the world for what it can be.” He asked, “What would the world be like if women took over – balancing the world with all their feminine energy?” And his delightful backup singers showcased their musical skills.

Common reminded us that music brings us all together. He leaped off the stage and sang his way up the aisle as security followed. The audience was encouraged to clap, then soul-clap. Call and response was very much part of his connection with his fans.

During the second half of the evening, Common was accompanied only by percussion, guitar, bass, and keyboard along with his DJ on turntables, and the two singers.

He said, “We do this for the people, and for God.” He finished with “Glory,” the magnificent theme song from the civil rights film “Selma.” “Freedom is like a religion to us, that’s why Rosa sat on the bus,” and “to God be the glory.”

An encore wasn’t planned, but the audience would not let him go. Common then paid tribute to Fela Kuti, the legendary singer and activist from Nigeria (1938 – 1997), as he offered three more songs.
“Love is the most powerful thing we have,” Common reminded us.

The afterparty – and you knew there would be an afterparty, right? — was held at the Battery, a private club, and I’m told it was fun.