Lucy Prebble was inspired to write The Effect (currently playing at San Francisco Playhouse) when a drug trial in London went horribly wrong. (Most drug trials go smoothly. Don’t let this play scare you away from participating.) The real case involved a drug with life-threatening physical side effects. The Effect is subtler: the anti-depressant on trial affects dopamine levels and therefore emotions. Only a series of improbably dire breeches of medical ethics enables the drug to cause dangerous physical harm. But even the emotional effects of the drug prove perilous for two participants, Connie and Tristan (Ayelet Firstenberg and Joe Estlack), who find themselves falling for each other.

The researchers’ histories complicate matters. Dr. Toby Sealey (Robert Parsons), who runs the drug company, previously had a fling with Dr. Lorna James (Susi Damilano), the researcher running the study. Dr. James suffers from depressive episodes (masterfully enacted by Damilano in a Jekyll-and-Hyde-type scene where her brain argues with itself). She is skeptical of anti-depressants. She cites research indicating that their effects are only short-term, but she also seems wary of the prospect of altering her reality. (She insists that depressed people have a more realistic view of the world than “normal” people.) 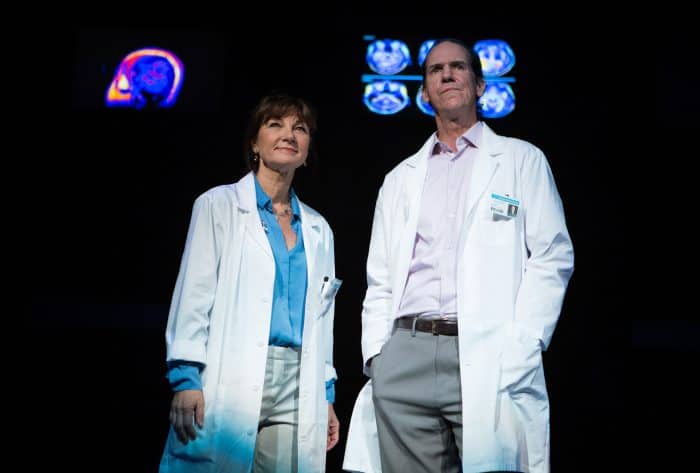 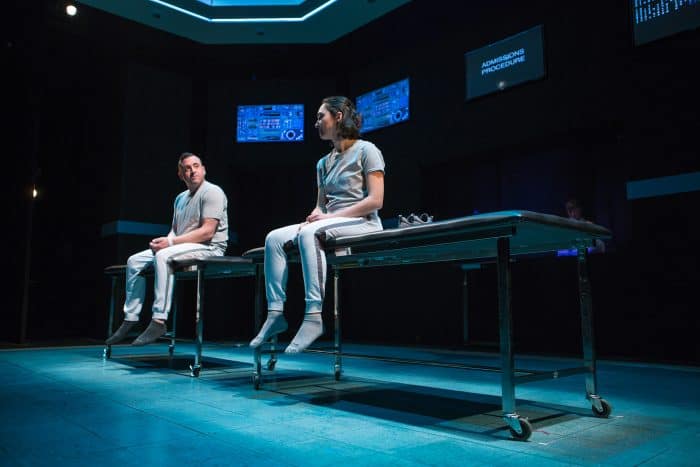 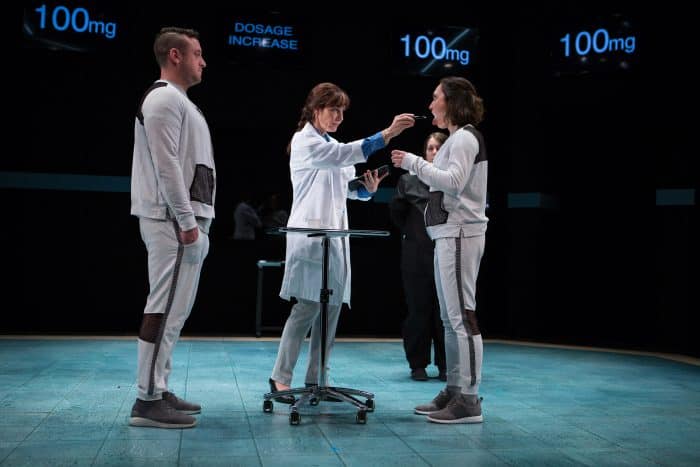 The Effect raises difficult questions without lecturing the audience or proposing easy answers. How can we trust in love if it’s reducible to brain chemistry? If emotions are just brain states, are pill-induced emotions any less real than “natural” ones? The characters discuss these issues not academically, but urgently—because they need to figure out what to do about their feelings. Connie initially refers to world outside the trial as her “real life,” but she eventually stops trying to maintain the distinction.

Despite the seriousness of its themes, The Effect plays like a comedy, eliciting a near-constant stream of laughter. Some of that is thanks to the absurdity of the situations Lucy Prebble sets up: there’s nothing like commenting on the hue and temperature of someone’s urine sample for a romantic first meeting! The sharply drawn characters also spout funny lines. Dr. Lorna James is reliably sassy (to her boss: “There is no such thing as side effects—only effects you can’t sell”), and Dr. Toby Sealey startles with his cynicism (on increased life expectancies: “I think people have kids now, when they should die”).

Director Bill English creates an environment where both the angst and the humor feel visceral. The actors converse naturally, interrupting each other or letting sentences trail off and awkward pauses creep in. Variety in pacing makes it clear when emotions and stakes are rising. The only timing missteps come in the film-style montage of the beginning of Connie’s and Tristan’s relationship, when the blackouts sometimes last longer than the micro-conversations they separate. The couple’s post-study encounters work better: we jump from day to day with no blackout and hardly a pause; a slight rearrangement of props and a change in Connie’s mood are enough to indicate a new scene.

Director Bill English creates an environment where both the angst and the humor feel visceral.

Nina Ball’s set has the feel of a futuristic spaceship, all sterile whites, crisp lines, and embedded screens. Track lighting laid into the ceiling changes color for scene transitions, accompanied by sci-fi-inspired sound effects (by Theodore J.H. Hulsker). These sorts of sounds also play during pill-taking and physical examinations. They contribute to the sense that the hospital where the study takes place is alien—in striking contrast to the human emotions it fosters.