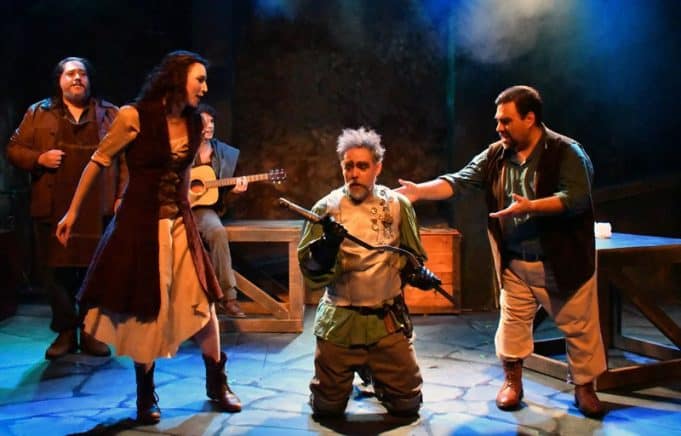 In Review: Man of La Mancha at Custom Made Theatre Co., San Francisco.

Don Quixote has no shortage of adaptations – cinematic, balletic, theatrical, and operatic – and all draw on different aspects of Cervantes’ famous novel. The 1964 musical Man of La Mancha shows Cervantes awaiting trial by the Inquisition. He defends himself to his fellow prisoners (and saves his manuscript from destruction) by staging Don Quixote. His condensed telling skips past most of the novel’s episodes, focusing on Don Quixote’s discovery of his “Dulcinea” (a waitress and whore named Aldonza) and his family’s attempts to bring him back to sanity. His illusions do much harm – especially to Aldonza – but his commitment to his quest wins the hearts of those around him all the same.

Such a role demands a charismatic actor, and Edward Hightower delivers. His Cervantes mixes natural directness with grave dignity. He transforms into his quixotic hero onstage, applying bushy eyebrows and age lines, tousling his hair, and donning armor. Suddenly, he is a knight-errant, striking dramatic poses and speaking in the language (and vaguely British accent) of medieval chivalry. He declares himself (“I, Don Quixote”) in a smooth, clear voice.

Custom Made’s production captures both the humor and the poignancy of the score.

The play-within-a-play framing of Man of La Mancha makes the thrown-together aesthetic of Custom Made’s production a natural fit. Costumes are whatever can be pulled from Cervantes’ trunk; sets are various arrangements of tables. To create a church, a prisoner kneels on a table and holds two sticks in the shape of a cross. The exception to the makeshift atmosphere is the colorful, moody lighting (by Maxx Kurzunski) – especially excellent in “To Each His Dulcinea” and the showdown with the Knight of the Mirrors. Actors double as instrumentalists (in a reduced version of the score), and there is no conductor, so merry musical chaos reigns. Exciting sound textures fill the space when many actors play together, even if exposed solo lines are sometimes tonally shaky.

The voices, too, are best en masse. For “Little Bird” and the finale, the company sang in perfect, shimmering harmonies. Many of members of the ensemble showed off gorgeous voices in solos: Shelby Stewart’s energetic belt as the Barber, Jenny Matteucci’s operatic mezzo as the Housekeeper, Emma Nadine Onasch’s legit soprano as Antonia, and Jack O’Reilly’s warm croon as the Padre. The leading characters did not fare so well, and were the show’s greatest weakness. The role of Sancho Panza sat too high for Dave Leon, whose sweet voice turned into a flat bellow on top notes. In other respects, he was perfect for the part, with a humorously doltish characterization and great euphonium playing. As Aldonza, Rachel Richman showed deep feeling but a weak voice that lagged the beat and shook on high notes. 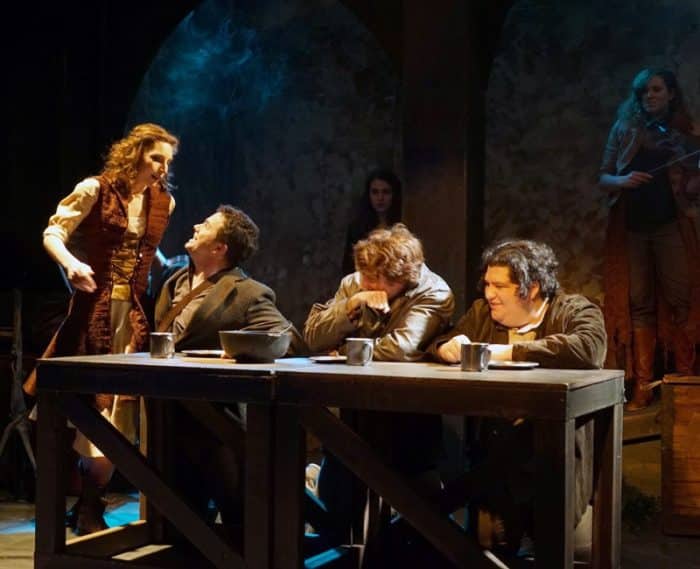 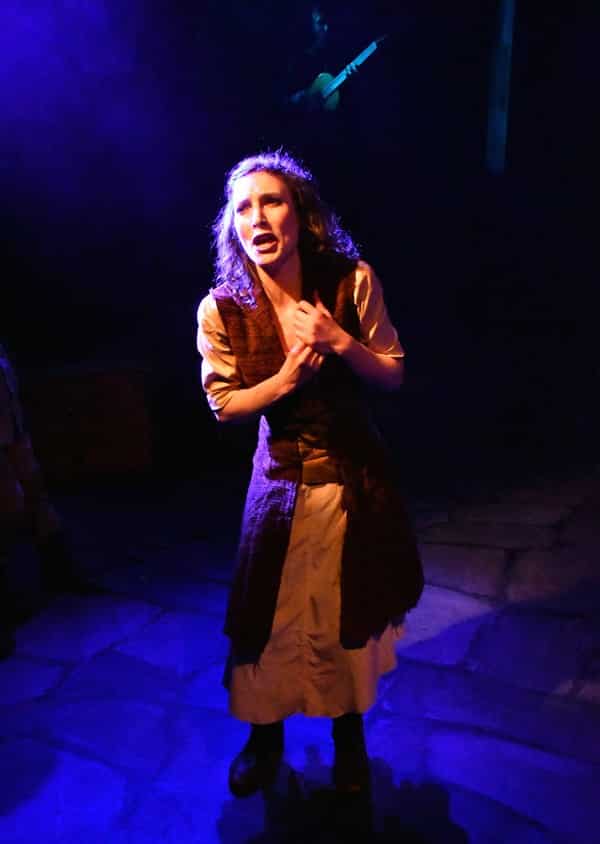 I adored Man of La Mancha growing up, and I listened to the soundtrack dozens of times, but it’s been years since I last saw it on stage. Even with musical rough spots, Custom Made’s production captures both the humor and the poignancy of the score. The show may become more polished as the run continues, but it already has a strong, emotional core.