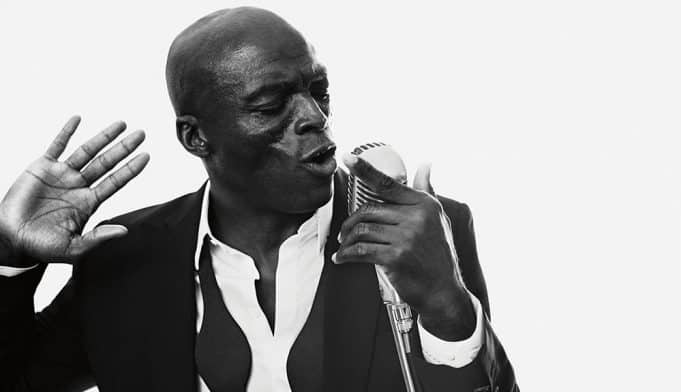 Seal with the San Francisco Symphony

He came onstage dressed in basic black, featuring a long coat and wearing a thin gold chain around his neck. In perfect form and voice, Seal began with songs from the album – Frank Loesser’s Luck Be A Lady, Jerome Kern’s The Way You Look Tonight, Gershwin’s They Can’t Take That Away From Me, I’m Beginning to See the Light, Duke Ellington’s Do Nothing Till You Hear from Me, Cole Porter’s I’ve Got You Under My Skin, Richard Rodgers’ My Funny Valentine, and Cole Porter’s Love for Sale.

… simply great vocal chords, thoughtful lyrics and a genuine love for the music.

Seal Henry Samuel has been quoted as saying in a recent article that his “back to basics” album developed indirectly from a personal crisis brought on by world events. The son of a Nigerian mother and a Brazilian father, he is the father of four children from his marriage to supermodel Heidi Klum, and at times he has wondered what kind of world he is leaving to them.

During the second part of the evening, Seal picked up a gold Stratocaster and accompanied himself while singing some of his best loved compositions, including Kiss from a Rose, Deep Water, and Crazy. Predictably the enthusiastic audience went “crazy” with excitement.

In a 2010 interview with The Guardian, Seal said:

“There are two things that I am about. The song, and the voice. But the song is literally untouchable to me. It’s divine. Whether it’s this genre or that genre, whether it’s current or not current: It’s the songs. The songs last forever.”

He finished the perfect evening with carols heralding the coming holiday season — Let It Snow, and The Christmas Song (Merry Christmas to You), made famous by Nat King Cole. Seal also included Smile, a personal favorite of his, and That’s Life, a song associated with Frank Sinatra. Seal seemed to identify with the lyrics, “I’ve been a puppet, a pauper, a pirate, a poet, a pawn and a king” from That’s Life as he chatted and joked with listeners between selections.

Edwin Outwater conducted the full SF Symphony, and Seal was lavish in his praise for the conductor and the musicians.

The audience was wowed and did not wish to leave. Davies Symphony Hall was packed, the orchestra was buzzed, and listeners were transported to a time when a singer could hold an audience without any props or staging – simply great vocal chords, thoughtful lyrics and a genuine love for the music.