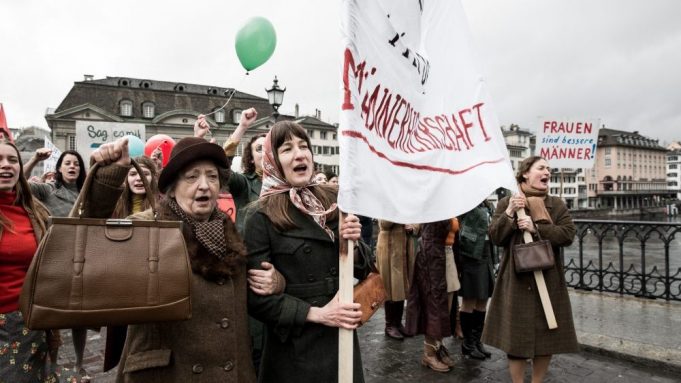 “The world was changing. But in our little village, time stood still.” This voiceover begins a charming 90 minute picture which recalls the 1970s moment when Swiss women rebelled and demanded the right to vote in elections, a basic right already won by other women in western Europe. A Swiss-German film with English subtitles, “The Divine Order” was written and directed by Petra Volpe. A feel-good blend of comedy and political history, the film received an award at the 2017 Tribeca Film Festival.

Marie Leuenberger stars as Nora, a wife and mother whose daily routine consists of shopping, cooking and cleaning for her family. As she spins a globe and plays geography games with her two sons, folds laundry with her sister-in-law and vacuums under the feet of her patriarchal father-in-law, she recalls the job she held before marriage and dreams of something more in her life. Timidly she asks her husband Hans if it would be OK to return to work, and he says no with some indignation. Hans lectures Nora, “I don’t want my sons eating tinned ravioli and my wife being around strange men.” As a solution to her restlessness, he playfully suggests that he get her pregnant again.

Her sister-in-law Theres struggles with a rebellious teen daughter – who has a poster of musician Jimi Hendrix on her bedroom door – and who has been grounded for spending too much time with older men. In the small village where they live, daughter Hanna (Ella Rumpf) has earned an unfortunate nickname, “the village bike.” Theres cannot seek help from her husband Werner for fear he will impose harsh punishment on their daughter. Under Swiss law, only the father is head of family and his word is law.

As Nora goes shopping, she encounters village women distributing literature about a meeting to discuss women’s suffrage. She is surprised and hesitant. Retired restaurant owner Vroni (Sibylle Brunner) speaks vehemently about what women have lost by not having the right to vote. Out of sight of her daughter Magda for a moment, the elder walks into the restaurant she used to own, before her husband lost it through bad management. Vroni encounters the new owner, a youthful Italian immigrant Graziella (Marta Zoffoli) who believes in women’s suffrage and invites the old widow to come in and stay as long as she likes.

Nora’s husband Hans has to go away on military reserve duty, and it is during this time that Nora has her awakening. Graziella takes Nora to a beauty salon for a makeover, then takes her shopping for tight jeans to replace her housedress. Nora spends hours reading Betty Freidan’s pioneering book and lots of feminist pamphlets. Suddenly the boys have to remind her that they want their dinner, and they are shocked when she says they have to wash the dishes instead of expecting their mom to do so. “But, we’re boys,” her sons protest. 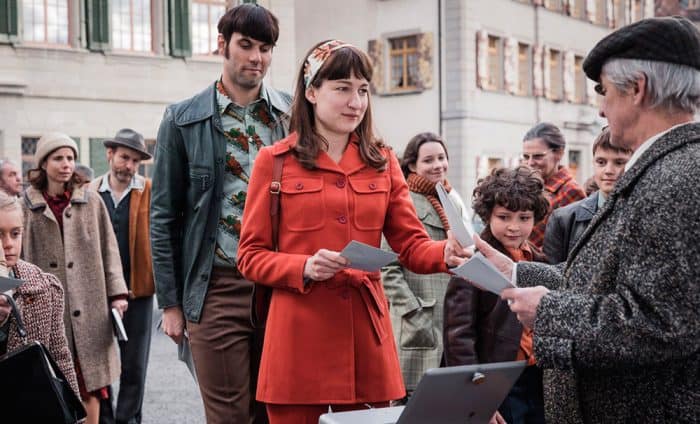 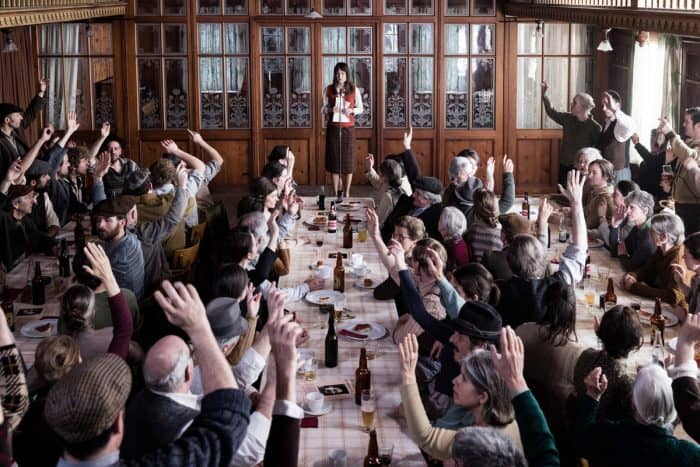 One quiet step at a time, Nora finds a way to get past her husband’s dismissal of her desire to have something more in her life than an endless repetition of household duties. This transformation is a thoughtful one, grounded in the growing realization that other women in the village have been denied basic rights – such as Vroni losing her restaurant because of her husband’s spending habits, and Magda dropping out of law school because her new doctor husband demands that she do so.

When Nora and Vroni try to rent a local hall for a public meeting on women’s suffrage, the older man in charge says no. “Women must remain quiet in society; it says so in the bible.” “And what does the bible say about adultery?” Vroni challenges him, and he drops his eyes under her knowing gaze.

And now the fun really begins. While Hans is absent on military duties, Nora and Vroni and Graziella go to a political demonstration in Zurich. They are transfixed as they observe women marching, waving provocative signs and chanting even more provocative slogans. Men sneer from the sidelines and the marching women shout them down. “Women’s rights are human rights.” And later they join in an “Our Bodies, Our Selves” style workshop and discover … themselves. Drawings of female organs, perhaps a forerunner of Judy Chicago’s installation artwork, “The Dinner Party,” are distributed in the workshop, followed by hand mirrors as in “see for yourself.” Yoni power.

Particularly moving is the moment all the village women gather outside town hall on voting day, and male voters have to walk through a silent sea of women to get to the polls.

Fully awake now, Nora returns to her village and things happen. Delightful and poignant moments are presented as the men of this conservative town struggle with the concept of women getting the vote. Wives and mothers on strike gather at Graziella’s café for foosball and card games as they plan their next strategy. And at home, Nora’s husband learns to cook, using a book of recipes. Particularly moving is the moment all the village women gather outside town hall on voting day, and male voters have to walk through a silent sea of women to get to the polls.

A sweet recalling of the not so distant past. And a gentle reminder of what one ordinary person can accomplish.