The Tokyo Night Sky is Always the Densest Shade of Blue

The Tokyo Night Sky is Always the Densest Shade of Blue is directed by Yuya Ishii, who also directed Sawako Decides in 2010. This latest film stands out both for its imaginative cinematography by Yoichi Kamakari and for the unusual source of its dialogue – the poetry of Tahi Saihate. The poet’s words and phrases are used to set the mood, peel back layers of personality and create dialogue between two seemingly star-crossed lovers. Since her work has not been translated into English yet, we are introduced to her poetry through English subtitles.

Saihate’s word images are accessible as translated, and they enliven the cinematic moments of two 20-somethings — Shinji and Mika — seemingly detached from emotions and hesitant to hope for tomorrow.

The moment you love Tokyo
it’s like you’ve killed yourself.

The hugh metropolis of Tokyo, incandescent and fluorescent from sundown to dawn, frames this poetic love story of two youthful souls bargaining their way through life. Shinji is a construction worker and Mika is a nurse; they meet via a glance across a crowded cafe, again in an upscale bar where Mika moonlights, and again on a street as she rides her bicycle and he is walking. Each time the brief connection is broken by one or the other, and tension builds as we wonder whether they will ever connect.

While no one loves the you
you think is pitiful,
Feel free to hate the world.
It is for that reason alone
love does not exist on this planet.
The night sky is always
the densest shade of blue. 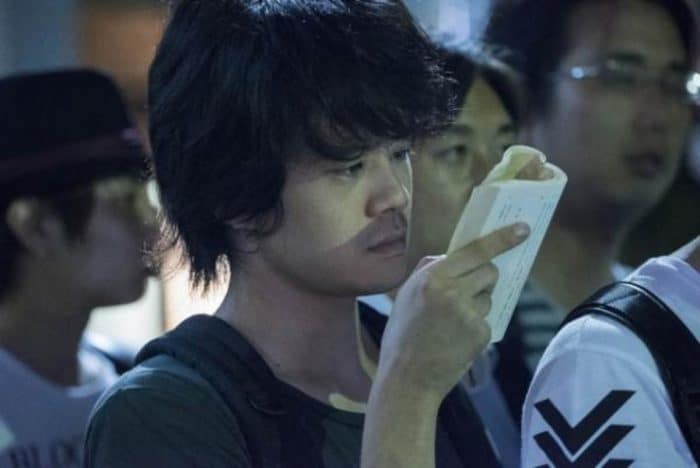 As played by Sosuki Ikematsu, Shinji is personable and much too talkative, but endears himself to co-workers at the construction site. A mix of day labor and full-time staff, the four men share a living space. Iwashita (Tetsushi Tanaka) is older and suffers from injuries incurred at other job sites; he thinks he has found a girlfriend. Andres (Paul Magsalin) is quiet, philosophical and misses his family back in the Philippines. Tomoyuki (Ryuhei Matsuda) is confident and assertive, everything that Shinji is not. Many evenings end in drinking and dancing to music on CD, with takeout containers scattered in their small apartment.

Many evenings end in drinking and dancing to music on CD, with takeout containers scattered in their small apartment.

Mika is introduced by the poetry of Tahi Saitate in voiceover. She wears a polite mask as a hospice nurse and bows appropriately as the body of a deceased patient is rolled past her, grieving relatives following. “Don’t worry, you will soon forget,” she thinks while smoking a cigarette on break. “Everyone assumes you’re OK. It makes them feel easier.” Layer by layer, as she travels through Tokyo on foot, by bicycle and on public transit, you learn more about her – how she fears her mother committed suicide, her earlier failed love affair, rivalry with her younger sister, her decision to take up karate, and her mysterious second job in a “girly bar.” 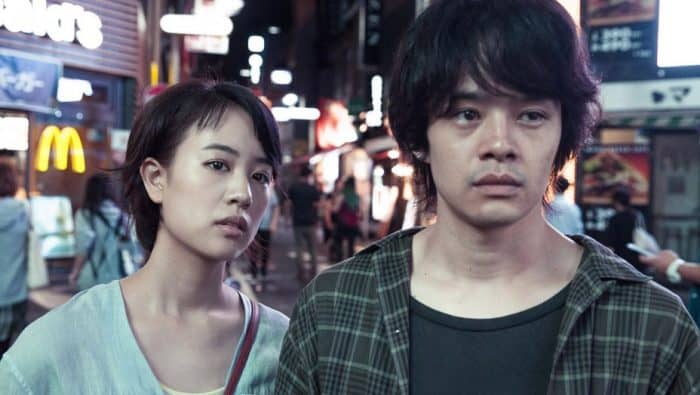 Lots of delicious details in the short scenes – Mika tenderly feeds her miniature turtle in its aquarium and then paints her nails before going to her second job as bartender and dancer. Shinji holds a hand over one eye as he reads a book in a noisy café; Mika first sees him there. Each listens to the street singer accompanying herself on a guitar downtown: “We’re all the same, right? This is Tokyo. Go for it!” She’ll never make it, they decide. Mika sits on a bench outside the hospice, eating a boxed lunch. And a million neon signs light up the night in Tokyo. Karaoke at a bar one night, and Shinji joins in; Mika challenges him – “Why did you pick that song?”

And as two solitary figures weigh the possibilities of a future together, their circling of each other becomes less wary.

Even if I don’t see you, that’s OK.
You’re out there somewhere.
It makes everyone feel easier…
Like water, like spring…

Looking for signs of life, signs of hope, Mika and Shinji banter and bargain. They notice an airship flying silently overhead. That street singer’s image and name are painted on the side of a truck; Ryoko has a CD out now – “Tokyo Sky.” One night Shinji looks up at the sky: “Is the Tokyo moon always blue like that?” Nobody seems to notice; all are pictured staring at their cell phones. Shinji realizes they are bathed in blue as they stand outside, and he says “it’s beautiful. “ And so it is, despite the neon, despite the cell phones, despite the huge metropolis, despite the risks of connecting.