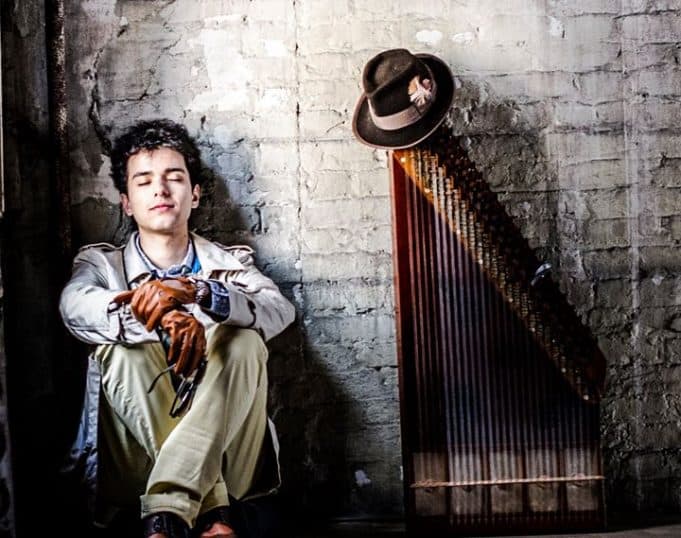 Last night, the Ali Paris Trio and friends filled the modest stage at Old First Church with passionate music. The international crowd included families who spoke Spanish, Arabic, Russian and Yiddish; and they cheered the accomplished musicians with love and ovations.

This is the second of three Ali Paris concerts at Old First Church this year, at a familiar and well-loved venue. Ali was accompanied by David McLean on flamenco guitar and Sage Baggott on percussion. Violinist Briana Di Mara and flamenco dancer Kerensa DeMars were special guests. For the last three songs, vocalist Clare Madrid took the stage and joined Ali on vocals.

Kerensa DeMars’ command of the stage was instant and complete

Standing throughout the concert, Ali played the qanun, said to be derived from the ancient Egyptian harp.  This instrument has been used in Arab music since the tenth century. Lifting it carefully from its table, Ali showed the beautiful instrument to the audience; it is a “trapezoid-shaped flat board over which 72 [or 76 or 81] strings are stretched.” The modern Arab qanun features multiple levers for string groups; adjusting these levers allows a full range of notes.

Ali’s childhood home was filled with music. From the age of seven, he pursued music in the only conservatory in Palestine.  For 12 years he studied the qanun. With others he performed in Dubai, Sweden, Norway. He first visited the U.S. in 2003.  During a 2009 interview he gave at the Berklee College of Music, where he studied voice, Ali said “It’s all about showing our different, unique music and telling people that we have musicians in Palestine. We have our culture.”

Ali likes all kinds of music. One reason he wanted to study in the U.S. was “to mix all this music and add our music to it. Lately I’m trying to play jazz on my qanun.  It feels great to have all the prospects opened in front of my eyes.” His musical abilities are admired by Alicia Keys, Bobby McFerrin and Quincy Jones.

This concert was advertised as “flamenco from Morocco to Andalucia.” Halfway through the concert of ten songs, the musicians were joined by a captivating dancer.

Kerensa DeMars’ command of the stage was instant and complete; the musicians’ eyes followed her sparkling white shoes and long red skirt as she moved with all the discipline and excitement one would expect of a choreographer and artistic director of the San Francisco Flamenco Dance Company. She is known for her synthesis of flamenco and middle eastern dance.  At one time she was part of a music and dance collective which developed unique interpretations of flamenco, north African and middle eastern musical traditions. Kerensa’s international performances include appearances in London, Madrid, Barcelona, Paris and Qatar.  In San Francisco she teaches flamenco to children and adults.

Church pews were filled with entire families and often three generations. While snacking on Spanish wine and almond cookies after the concert, audience members purchased CDs and mingled happily with performers.

Old First (Presbyterian) Church on Van Ness Avenue in the City was established in 1849; it is the oldest Protestant congregation in California.  Its famous weekend concert series started in 1970. The series focuses on “emerging and mid-career professional musicians and their ensembles playing creative programs that frequently include new or rarely heard repertoire.”

Individual song titles were not included in the program, but were announced from the stage. A problematic sound system prevented many from hearing remarks made between songs. However, the musicianship was first rate throughout the evening.