Director Rahmatou Keïta has given us a delicious and timeless film in The Wedding Ring. It is a 2016 release from Niger, Burkina Faso and France under the original title of Zin’naariya! This is only her second feature film, and in it Keita gives a distinctly female perspective on the subjects of love and marriage.

I spoke with the director before the screening at the San Francisco International Film Festival. She was especially concerned that western critics in particular and western viewers in general understand that there is more than one way to tell a love story, and that it most definitely does not have to involve explicit physical moments onscreen. Love is the heart-felt emotional connection which defies reason and defies dynasties, which has been the occasion for a U.S. Supreme Court decision outlawing laws against intermarriage, and the occasion for a legendary war between two powerful Greek city-states in the ancient world.

There is love, the pain of love, sensuality, prayer, conjuring, joy and weddings!

A woman who speaks seven languages, Keïta has used her deep knowledge to write and direct a film which depicts daily life and family interactions in villages in the south of the Republic of Niger. These desert citizens are aristocrats and pay serious attention to quality of family life and the arrangement of marriages. Tiyaa (Magaajyia Silberfeld) is returning home to her village after studying in France, where she became enamored of another aristocratic African from a different culture while absorbing some western ways. She is received with love at home, but maintains a distance from her family while she tries to process this strange new emotion of love. Seeking to find out the nature of the problem, her friend Mayya persuades Tiyaa to go with her to a zimma, a shamanic practitioner of the ancient arts using shells and sand. And it is here that magic happens.

This is a warm and vibrant culture with distinct areas of endeavor for men and women. Both Muslim and pre-Christian cultural practices are explored, and we see two ways of existence side by side. The men and women take tea throughout the day, sitting near each other but separated by gender. When Tiyaa and Mayya travel from place to place, they ride in a car which always has a male chauffeur. The Hausa value courtesy above all else, and have clear rules against domestic abuse. 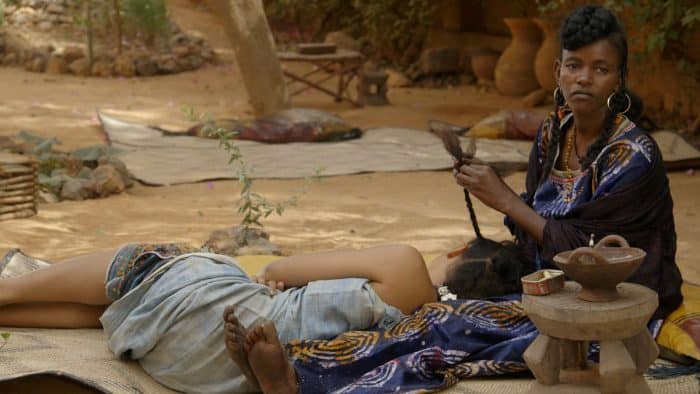 The personalities of three different generations; the bright colors worn by both genders in natural fabric; the male weaver who sits in the middle of the compound working quietly as he drinks tea; the herdsmen who live simply near the river and who regard the villagers as “city folk;” the hilarious affectations of a young relative who has taken totally to western ways; the joyous music played at weddings; the celebration of the lunar new year; the escapades of brides who have their own way of circumventing arranged marriages; the contrast between the traditions of village life and truckloads of heavily armed soldiers going to a conflict somewhere. The tragedy for us westerners is that we only see media stories of the heavily armed soldiers, and rarely anything about village life in peaceful areas.

This film delights on several levels, from the sheer beauty of this desert culture to the humor inherent in the communication between generations, as well as negotiations through the complexities of courtship and marriage. There is love, the pain of love, sensuality, prayer, conjuring, joy and weddings!

The Wedding Ring is fiction but is firmly rooted in the culture of the Sahel, the zone of transition in Africa between the Sahara Desert to the north and the savanna area to the south. It is a semi-arid region extending from the Atlantic Ocean eastward through Senegal to the great bend of the Niger River and all the way into the Sudan.

Their vibrant way of life may be disappearing, and this film is a welcome and joyous remembrance. Many thanks to the director.