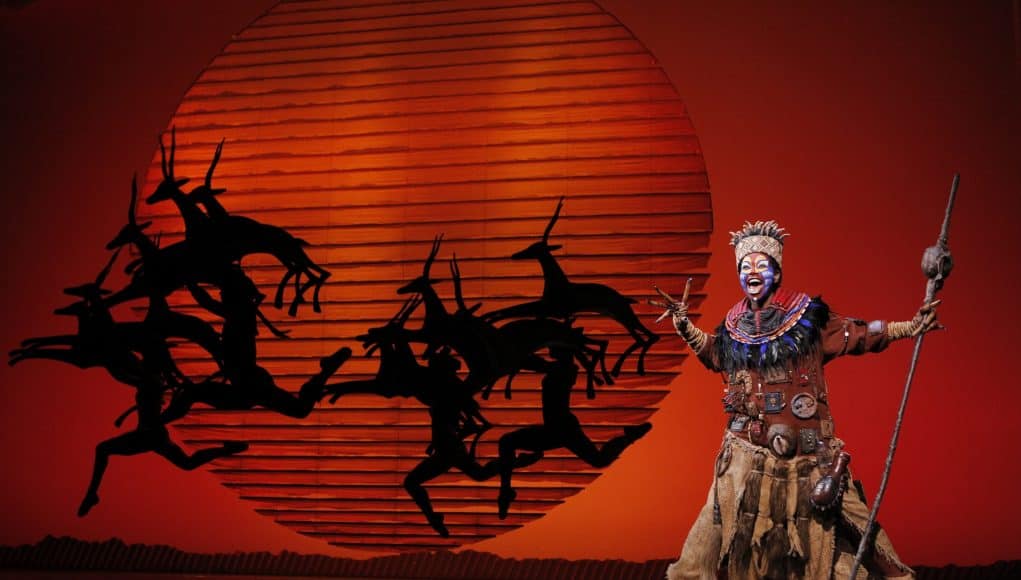 4 out of 5 stars - 'Smashing'
SHN Orpheum Theatre, San Francisco
2 hours and 30 minutes, including a 20-minute intermission
Through Dec. 31, 2016
Review by Jeanne Powell

One of the longest running shows on New York’s Broadway, The Lion King musical has come to San Francisco for seven weeks. Although we know the characters and the songs practically by heart, we are more than willing to be transported again, and we are not disappointed, not at all.

The songs we know so well were written by Elton John and Tim Rice, with contributions from Mark Mancina, Jay Rifkin, Lebo M and Hans Zimmer.

After years in development, The Lion King was released as an animated feature by Walt Disney in 1994. For nine years it was the highest-grossing animated feature film of all time. Such popularity met that a stage musical could not be far behind, and a live version of The Lion King opened in 1997. Since that time, multiple productions have graced a number of stages, including the long-running version in London.

The songs we know so well were written by Elton John and Tim Rice, with contributions from Mark Mancina, Jay Rifkin, Lebo M and Hans Zimmer. Julie Taymor received Tony awards for directing The Lion King and for original costume design. Her imaginative and colorful costumes from the musical are now part of the Smithsonian National Museum collection.

In 1996 Walt Disney asked Jamaican-born choreographer Garth Fagan to help create something for the stage. Fagan watched a screener of the film and was enchanted. Already known for his own dance company which was proficient at mixing ballet and modern dance, Fagan found himself working in a different atmosphere with unique challenges. The intense collaboration worked extremely well because Fagan’s choreography went on to win a Tony award.

What Garth Fagan makes look easy involved incredible effort – calculating how dancers would move with elaborate headdresses and complicated costumes, as well as timing production numbers to the length of Elton John’s songs. Dance moves borrowed from the animal kingdom and set to a range of musical styles allowed audiences across the country to experience and appreciate more of what dancers can do, “as opposed to most Broadway shows where it’s step, step, kick, smile, jiggle-jiggle…” according to Fagan.

We all know the story – a mischievous lion cub disobeys his kingly father and tragedy results, mostly through the machinations of the king’s jealous brother. Wandering for years in a resignation filled with guilt, the lion cub is restored to his family and his rightful inheritance at Pride Rock and becomes king of the African savannah.

Inspiration for the diverse population of gazelles, cheetah, meerkat, warthog, hyenas, lions, and the royal mother lion was a joint effort. Director Julie Taymor and choreographer Garth Fagan looked to the traditional art of shadow puppetry developed in the Far East, modern dance moves, and the 17th century Japanese style of Bunraku.

The result is a dazzling evening of enjoyment with a timeless storyline – love, fidelity, betrayal, tragedy, faith, perseverance and restoration to all that is right.

The result is a dazzling evening of enjoyment with a timeless storyline – love, fidelity, betrayal, tragedy, faith, perseverance and restoration to all that is right. Elephants majestically walk the aisles to the stage, dancers delight us in colorful African costumes as they run through the audience, and the big cats of the tropical rain forest fascinate with graceful yet powerful reminders of their supreme power. Make-believe becomes real and you are fully engaged. 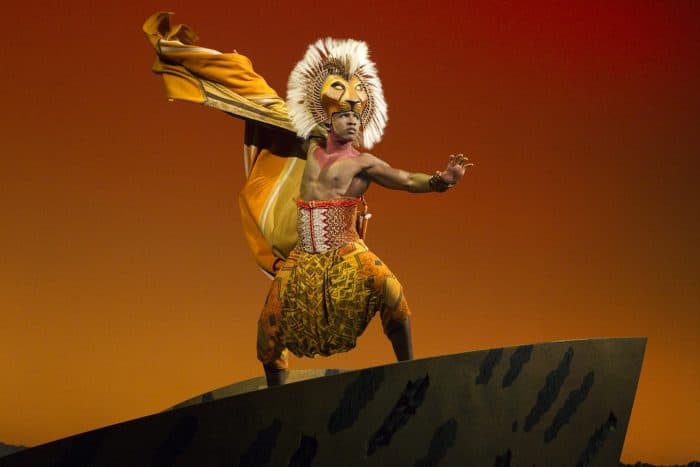 Lion King characters continue to entertain. Rafiki the baboon serves as shaman to the Lion King; Buyi Zama’s magnificent voice as Rafiki brings to mind the legendary Miriam Makeba of South Africa. Sarabi is queen and mother of the lion cub; she is gentle as Simba’s mother and fierce as leader of the lioness hunting party (Jennifer Theriot). Simba as a boy is endearing and later sympathetic as a young man lost until he claims his birthright (BJ Covington and Jalen Harris). The king Musafa and his scheming brother Scar are polar opposites in terms of character. Of course, the meerkat and warthog provide marvelous comic relief along with the hyenas; and particular mention is made of the royal majordomo Zazu, a very wise red-billed hornbill.

This was my first time seeing The Lion King. My friend who accompanied me had seen other productions back east. From toddlers to elders and from newcomers to returning fans, the audience was of one mind; this was a night to remember.