What would it be like if your daughter or younger sister – or you – could reach for the stars with parental support? There would be no limit to your dreams or your achievements – becoming prime minister or an astronaut or an eagle hunter would be inevitable. Despite the hardships and challenges, you would persevere – and then triumph.

The Eagle Huntress is a 90-minute documentary (which recently played the Mill Valley Film Festival) inspired by the real life story of 13-year-old Aisholpan, who lives with her Kazakh family near the Altai Mountains in western Mongolia. Director Otto Bell first spotted her in a BBC news story and he was fascinated as soon as he saw the photographs of her in mountains, taken by Asher Svidensky.

As the Svidensky photos started “going viral,” Bell realized he had to get to western Mongolia right away, before someone else did. So Bell, cameraman Chris Raymond and Svidensky headed to Mongolia by airliner, twin prop plane and rickety Soviet-era bus. Recording Aisholpan’s remarkable life was not easy. Director of photography Simon Niblett eventually collaborated with Bell on this documentary; and he has said the experience was not fun exactly, because they had no money and so filmed on a shoestring in formidable weather with the simplest of equipment. The adventurous spirit of Aisholpan was the inspiration which kept them going. The result is a documentary you will want for your permanent collection.

During much of the year Aisholpan lives with her family in a ger (think of a yurt) next to a mountain range. They are herders and hunters. In the harsh winter months they take down the large ger, pack in a few hours, and drive to a base camp with a stone floor and thick walls. During the school year she and her two younger siblings attend a boarding school. Each weekend their father pulls up in an old van or on a motorcycle and takes them home for the weekend.

The heart of the story? Aisholpan wishes to train to become an eagle hunter, just like her father and his father and ten generations before them. Her father is not sure and consults her grandfather. Hunting with a trained bird of prey is a strong tribal tradition dating back some 4,000 years on the Asian steppes, and later spreading east to China and west to Arabia and Persia. With the approval of father and grandfather, Aisholpan begins her arduous training, first with her father’s golden eagle and then with her own.

The closing song by Australian performer Sia will bring tears to your eyes.

And how does Aisholpan acquire her own eagle? Tied by a single rope held in her father’s hand, she climbs down a steep cliff and raids an eagle’s nest while the mother eagle is out hunting. She must capture her own baby eagle in a blanket, hold onto it and then clamber back up the cliff.

The radiance and inner happiness of this fearless outdoor girl are captivating and you watch the documentary closely to see where these qualities come from. Her mother is quiet and says little before the camera, but her maternal gaze is always on this amazing daughter of hers. When she is asked, this traditional mother — who milks cows and makes meals from scratch — says that her daughter should be able to do whatever she wishes. 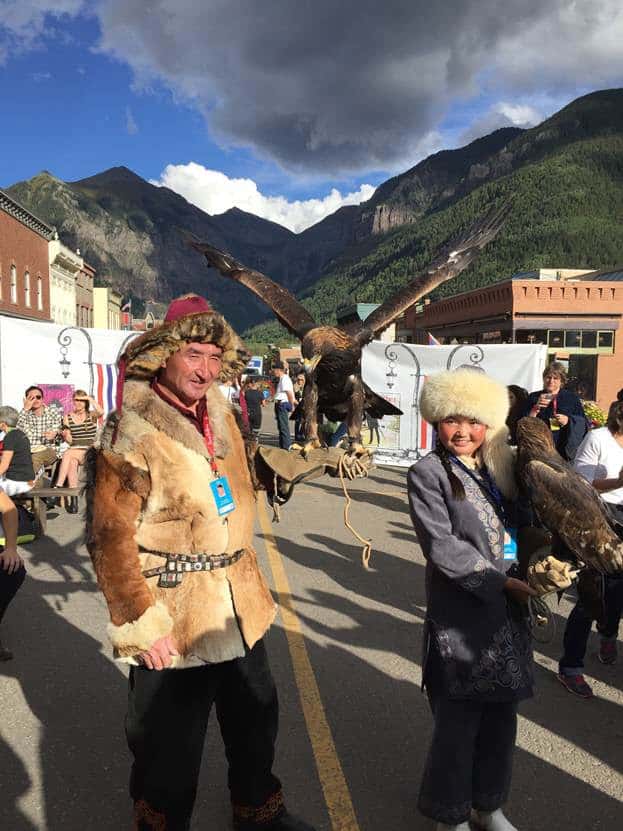 As her training progresses under the watchful eye of her father, Aisholpan becomes more confident and she registers to compete in the annual golden eagle festival against men and boys all older than she is. Preparing for the fateful event, she sits happily while her mother braids her long hair and attaches lovely ribbons. Then she applies pink polish to her nails and to her baby sister’s nails! And she wears a pearl bracelet.

It takes an entire day to travel from their nomadic home to the town where the competition is being held. Aisholpan and her father ride horses the whole way, with her 15-pound golden eagle resting on her arm. There are four parts to this daunting competition; you are judged on the basis of your riding clothes, your horse, your riding style and your hunting style. The doubters, the skeptics and the nay-sayers are all there. Can she handle the pressure? And even if she wins, will she be able to fulfill the second requirement for becoming an eagle hunter – going into the Altai Mountains in the winter and having her eagle take a fox as its first kill?

When you speak about breaking glass ceilings, you may add a new heroine: Aisholpan from a family of eagle hunters in the Altai Mountains of western Mongolia.

Cannot say enough good things about the photography in The Eagle Huntress. The stunning vistas from ground and mountain peaks, frightening challenges of leading a rebellious horse through deep snow in the middle of winter while holding onto a hooded eagle, capturing the costumes and camels and horses crowding into the annual competition, gaining entrance to the homes of the legendary eagle hunting elders as they weigh the pros and cons of allowing a girl to train and compete, catching the glowing face of Aisholpan’s quiet mother – many thanks to Simon Niblett, Christopher Raymond, and Martina Radwan (intimate scenes with female family members). The closing song by Australian performer Sia will bring tears to your eyes.

Comparison with Whale Rider, director Niki Caro’s marvelous 2002 film about a Maori girl who wishes to succeed her grandfather as chief, can be made. The difference is that 12-year-old Paikea had to struggle against her grandfather’s objections to her becoming a Maori chief. In contrast, Aisholpan had the total acceptance and encouragement of her father and her grandfather when she decided to become an eagle hunter.

When you speak about breaking glass ceilings, and think about courageous girls all over the world — Zlata Filipovic who wrote “Zlata’s Diary: A Child’s Life in Sarajevo”, and Malala Yousafzai who won the Nobel Peace Prize – you may add a new heroine: Aisholpan from a family of eagle hunters in the Altai Mountains of western Mongolia.