Abduction From the Seraglio

4.5 out of 5 stars - 'Right on the Money'
Festival Opera
Valley Center for the Performing Arts, Oakland, CA
Review by Ilana Walder-Biesanz

Comic operas are rarely hilarious. A good Fledermaus or Barber of Seville might get you chuckling on occasion, but it won’t have you holding your head in your hands fighting bursts of uncontrollable laughter. Normally, The Abduction from the Seraglio wouldn’t either, but Josh Shaw’s libretto and staging, which turns the Mozart Singspiel into a cheesy Star Trek parody, does the trick.

The plot is practically a Star Trek episode anyway: (Lieutenant) Constanza, (Mister) Pedrillo and Blondie have been captured and are being held in a harem (on a Klingon spaceship). (Captain James T.) Belmonte comes to the rescue. Many of the aria translations capture the spirit of the German originals, despite generous adaptation. The re-written dialogue is full of bad puns and sexual innuendos. Frequent breaking of the fourth wall adds to the mirth, such as when Captain Belmonte paused an aria to flirt with a costumed audience member, or the self-aware escape scene lyric “Now we sing instead of leaving. What’s the hurry? I am sure we’ll all be fine!”

It’s nerdy and absurd. But it’s also tons of fun.

Brian Cheney anchored the cast as Captain Belmonte, in a preening, posing, slow-spoken parody of William Shatner. He checked his watch during his held notes, danced through his coloratura runs, ordered around the conductor, struggled to control his “beating, throbbing ‘heart’”, and directly demanded the audience’s acclaim. Like most operatic tenors, he got away with it thanks to a bright, flexible voice well suited to the role. He also deserves a special mention for his disguise as a mechanic, complete with a red shirt and the worst Scottish accent I have ever heard.

As his unfaithfully beloved Constanza, Shawnette Sulker navigated the opera’s most difficult music with confidence. She was sometimes off the voice in “With my lover I was happy” (“Ach ich liebte”), but she powered through and achieved a stronger tone in “I defy the pain” (“Martern aller Arten”). Her coloratura runs and high staccato notes impressed, though she didn’t make the aria the showstopper it can be—partially the fault of her wooden acting in both song and dialogue.

Sara Duchovnay achieved more success as Blondie—here, a green girl with an East Coast accent and plenty of attitude. Her top notes rang, and she also revealed a chesty lower range in an act two duet with Osmin. Her “macho Vulcan hero” Mister Pedrillo, sung by the clear-toned character tenor Robert Norman, proved admirably logical, even if he struggled to keep a straight face during the Captain’s most outrageous antics.

Kevin Thompson’s (Klingon) Osmin was the vocal standout of the evening. His crackling bass with round bottom notes boomed through the theater, though the role’s highest bits were a stretch. This Osmin was both sword-brandishlingly intimidating and disco-dancingly silly. Michael Crozier rounded out the cast as the unconvincing Klingon Chancellor Selim. When he ought to have stormed, his deliveries were flat. 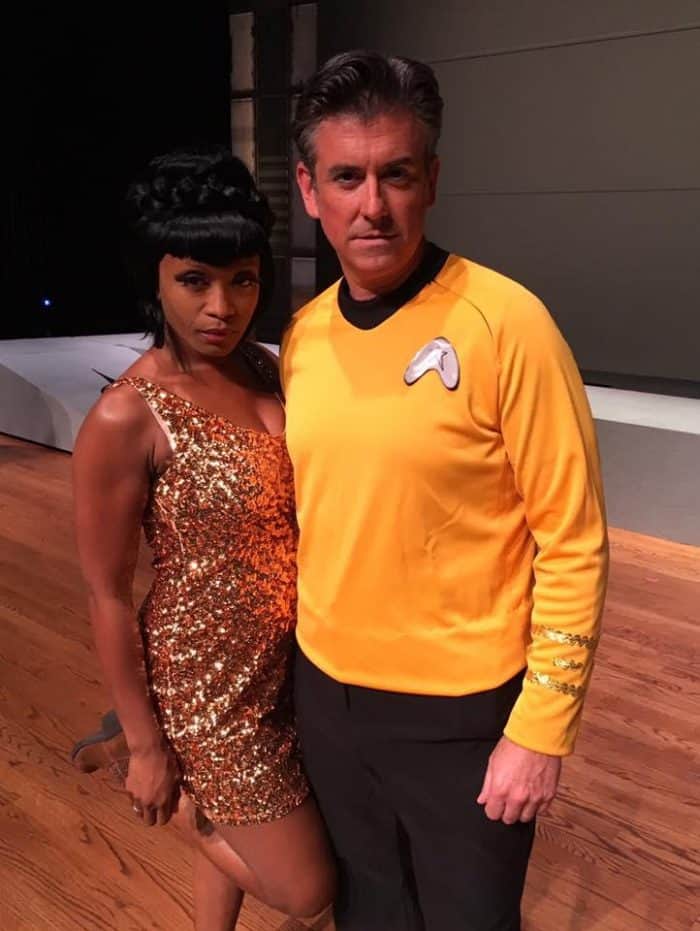 The chorus, in colorful bodysuits or Klingon war garb, sounded thin and uncertain of their parts. The yellow-shirted Michael Morgan led the Oakland Symphony Orchestra through the score (plus the Star Trek theme and a few sound effects), keeping the action quick and energetic while responding to the onstage gags. A few musical missteps notwithstanding, it was a treat to hear an orchestra this large, talented, and cohesive play in a small house.

As General Director Sara Nealy warned us before the show, “this is not typical” of opera. It’s nerdy and absurd. But it’s also tons of fun. It will convert Trekkies into opera fans—and opera fans into Trekkies.