Master Harold... and the boys

Thursday was a night for tears. Some of them were caused by the political news from across the Atlantic, but many of them were the fault of Aurora Theater Company’s devastating “Master Harold”… and the boys.

Athol Fugard’s play was banned in his native South Africa where it is set, so its 1982 premiere took place in New York instead. At first, it’s hard to see why. Willie and Sam chat and joke and dance as they clean the tea room where they work. Their white employer’s son Hally (Harold) drops by after school. With a mix of collegiality and condescension, he reminisces with Sam about his younger days. Sam and Willie teach Hally the beauty of ballroom dancing, “a dream about a world where accidents don’t happen,” unlike the real world where “no one knows the steps… [there are] big collisions, and they make a lot of bruises.”

The play is a slow burn of exposition until Hally’s mother calls to say that his crippled father is coming home from the hospital. Angry with his parents, Harold lashes out at Sam verbally and physically, in shocking and heartbreaking ways. There’s a transfixing dreadfulness to the brutal, quick destruction he wreaks by invoking race. 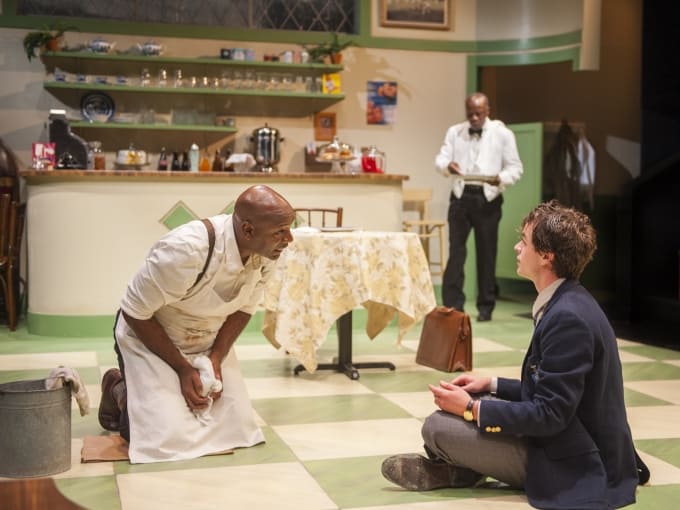 Andrew Humann plays Hally with both warmth and deep-burning rage. He convinces as a teenager desperate for connection and frustrated by his broken family life. In spite of his racism and poor decisions, Harold manages to be a sympathetic—if not quite likeable—character. As Hally’s friend and father figure Sam, L. Peter Callender creates a touching man who learns quickly, dreams big, and cares more for his relationships than his pride. Not a posture, word, or dance step is out of place. Adrian Roberts rounds out the cast as the more reserved Willie. That detachment is precisely what makes his raw emotional moment during the play’s climax (a difficult and well-executed bit of acting) so effective.

This cast and script would work in a black box, but Aurora still deserves credit for the attention to detail apparent in their production. The mint-and-white period set by Richard Olmsted is spot-on—there are even raindrops flowing down the windows. (Hally also makes his first entrance with his hair and jacket drenched.) The accents, coached by Lisa Anne Porter, sound consistent and accurate to this reviewer’s untrained ear. Both the scuffles and the quicksteps are cleanly choreographed.

By the end, you will be suffering from a strong sense of vicarious guilt and a horror of systemic racism.

Go see this play. Half of the way through, you’ll be wondering what you’re still doing there and where this is all leading. By the end, you will be suffering from a strong sense of vicarious guilt and a horror of systemic racism. Theater that can inspire such fierce emotion with such elegant simplicity is theater well done.